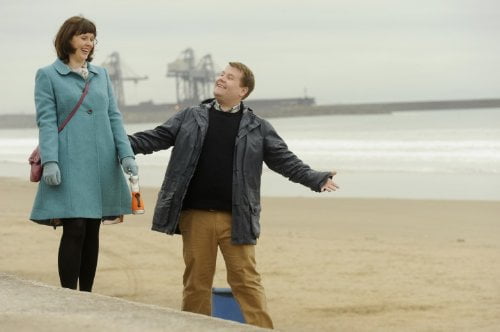 Paul Potts (James Corden, "The History Boys"), who tells folks his name is 'like the Cambodian dictator,' grew up chubby and bullied, but singing has always kept his spirits up. As an adult, Paul works at Carphone Warehouse but still dreams of the stage. After winning over a hostile pub crowd in a local talent competition performing a Pagliacci aria in full clown regalia, he heads to Italy for a shot at a master class with Pavarotti, but his big opportunity begins a streak of bad luck. Years later, having settled into the blue collar life his dad always envisioned for him, Paul hears about a new reality show that could prove his "One Chance."

It's easy to see why the story of Paul Potts, an early Youtube star and an inspiration to Susan Boyle, would be ripe for a movie version - the man kept bucking odds to let his talent shine, had the worst luck at the worst times and yet still managed to prevail. Mix in an online date arranged by his mum Yvonne (Julie Walters, "Mamma Mia!") that turned into marriage and a trip to Venice to vary the scenery and you've got what's called a crowd pleaser. The film, written by Justin Zackham ("The Bucket List") and directed by David Frankel ("The Devil Wears Prada," "Hope Springs") has a fairly high twee factor that will set most cinephiles' teeth on edge, but for those who enjoy this type of thing it'll do (plus there's always the pleasure of seeing the pre-performance prejudice of 'Britain's Got Talent's' Simon Cowell drain right out of his face). Potts's story, has, of course, been stream-lined in some places and exaggerated in others, but the filmmakers quickly get to the heart of Paul's character with a montage which shows him aging as he runs from the bullies who cursed his childhood. When he shyly meets future wife Julz (Alexandra Roach, "The Iron Lady's" young Margaret Thatcher), they glom onto pet names and she's immediately embraced by his doting mum and amiably sarcastic dad Roland (Colm Meaney, "Alan Partridge"). The bullies assembled at that pub competition learn a thing or two before Paul takes off for a master class in a gondola-overloaded Venice, where he's paired with stunning singer Alessandra (Valeria Bilello) as he manages his courtship long distance. But ever time Paul seems about to break through, disaster looms. "One Chance" (the title's taken from Potts's first album) is all about perseverance against daunting odds and proving naysayers wrong while remaining cute and cuddly. Corden's been given a chipped tooth to more resemble Potts and, while the man is a singer in his own right, Potts's singing voice is what's heard (his rendition of 'Nessun dorma' on the first broadcast of Cowell's show has over 120 million views!). Walters, Meany and Roach are talented enough to make their formulaic 'characters' endearing, while Mackenzie Crook ("The Pirates of the Caribbean") provides the mateyness as Paul's Carphone Warehouse boss Braddon (Braddon's girlfriend Hydrangea, played by Jemima Rooper, adds overly colorful color). In (already dashed) hopes of an Oscar nomination, Taylor Swift sings 'Sweeter Than Fiction' over closing credits. Grade: