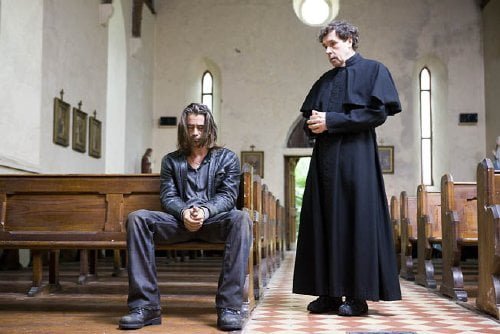 Sober alcoholic Syracuse (Colin Farrell, "In Bruges," "Crazy Heart"), known by the Irish locals as 'Circus' because of prior shenanigans, is fishing off the coast of Castletownbere on his boat the Lucky D one day when an extraordinary thing happens. When he hauls up his net, a beautiful woman is entangled with the fish. Initially panicked, Syracuse discovers the mysterious woman is alive but when she becomes agitated at the thought of medical attention or any attention at all for that matter, he hides her in his deceased mother's caravan on a remote bay. From that day on, Syracuse's string of misfortunes turn into the most unlikely luck all because of the woman - or is she a selkie? - who calls herself "Ondine." Laura: Writer/director Neil Jordan ("The Crying Game," "The Brave One") returns to the realm of fairy tales where he began his career with 1984's "The Company of Wolves." But where that film was dark with autumnal forests, this one is light with blue seas. This whimsical tale of a sad fisherman redeemed by a 'water baby' with a romantic assist from his cherubic, disabled daughter Annie (Alison Barry), is crafted by Jordan with such a light touch that it seems to weave a spell around its viewer unawares, like a fish caught in a gillnet. After leaving Ondine (Alicja Bachleda, "Trade") with the sandwiches the day's 'unusual fishing' made him forget to eat, Syracuse rushes, late to pick up wheelchair-bound Annie for her dialysis treatment. (Her mother, Maura (Dervla Kirwan), still drinks and threw Circus out when he stopped. She now lives with Scotsman Alex (Tony Curran, "Red Road"), a nice enough if rough-around-the-edges guy). On the way home, when Annie demands her usual story, Syracuse tells her the events of the day. The precocious Annie thinks his unformed story is lousy and she is the one to suggest its subject is a selkie (a myth originating in Scotland's Orkney and Shetland Islands where a seal can shed its coat to become a human but which must return to the sea unless its coat is hidden or destroyed). When Ondine, whom Syracuse has clothed with a dress and sundries lifted from a local shop, accompanies him on the Lucky D, her ethereal singing seems to make lobsters jump into pots. He's smitten and 'confesses' to his best buddy, the local Catholic priest (Stephen Rea, "The Crying Game," "Stuck," giving the Church a much needed very good and funny face here). Things get more complicated when Annie gets a motorized chair and goes out to the caravan to see what she's surmised for herself. Later, fishery inspectors board the Lucky D to find salmon in a trawling net (purportedly an impossibility) and a woman below decks who swears by Syracuse's story. As the town begins to buzz about the company Circus keeps, a man in a dark moustache (Emil Hostina, "The Wolfman") begins to skulk about town and Annie, who conspired with Ondine to bury her coat, is convinced he is her selkie husband come to reclaim her. A wish for Annie's return to health is granted via a tragedy which, aided by a selfish Maura, nudges Circus off the wagon. Colin Farrell has been on a most marvelous upswing ever since his Golden Globe winning turn in "In Bruges," and here, in his homeland, he is rooted in his own blue collar, ex-alcoholic past, but just as with Jordan's direction, there is a lightness to his acting here. We can feel his absorption in both his daughter and the new woman in his life, but he still coasts on a devil-may-care wave, best exemplified by his truly amusing relationship with Rea's priest. Born in Mexico to Polish parents, Alicja Bachleda, Farrell's real life partner, is as foreign as her vaguely French accent and she projects an untamed wildness with an underlying yearning for domesticity. She's also blessed with a haunting singing voice. Young Alison Barry does the nimble trick of taking the brat out of precocity and delivers some of the film's funniest lines -'this town is what you'd call sartorially challenged,' for one. Rea, a frequent Jordan collaborator since 1982's "Angel," hasn't had a feature role this memorable in years and has a nice parallel subplot in this fairy story by becoming a virtual tree. The film was shot by Christopher Doyle ("In the Mood for Love," "Paranoid Park") in a semi-straightforward manner that nonetheless has an underlying sense of magic, accentuated by original music from Sigur Rós keyboardist Kjartan Sveinsson, both of which recall "Local Hero" yet achieve their own tone. If the movie has a fault, it's with the ending. Filmed with a digitized effect, Jordan explains all nicely, his myth become reality, but it feels rushed, as if the director suddenly realized he had fifteen minutes of story telling to fit into five minutes of screen time. Still, "Ondine" has the wonderful effect of sneaking up on and enchanting its viewer and is a wonderful return to form for the Irish writer/director. B+

Ian McEwan has adapted his own, heartbreaking 2007 novel for the screen and even he has apparently had difficulty cracking the interior lives of his young, would be lovers. The film is beautifully cast and stage director Dominic Cooke, making his feature debut, has made it resplendent with period detail except in the one instance that matters most here, the sexual repression of the times. Those who come into the film without having read McEwan's novel are likely to come away with an opinion of Florence and Edward the author never intended. Like the novel, the film focuses on a disastrous honeymoon, filling in detail through flashback, before flashforwarding into the future (the adaptation adds additional scenes in later years, some of which work, others which do not). The young, formally dressed couple are visibly avoiding the bed which dominates their typically British seaside hotel room. Their conversation is more relaxed, at least until room service arrives, two waiters determined to stand at attendance until their main course of roast beef, potatoes and peas is served, Edward's inexperience with such worldly rituals causing him to cave. The burst of laughter that follows the waiters' withdrawal only accentuates that which looms. We then get a glimpse of Edward's background, the bookish boy glimpsing out his bedroom window only to observe his mother nude in the garden. His father comes and covers her, tenderly leading her into the house, his younger twin sisters (Anna and Mia Burgess) closing rank. Female nudity is, therefore, something Edward has been regularly exposed to although it has been tinged with shame. Florence is seen sitting at a dining room table across from her sister (Bebe Cave), her mother sitting at table's head, a martinet in pearls obsessed with good breeding. Florence, who leads her Ennis Moore Quartet much like her mother rules her household, introduces Edward to classical music, dreaming of one day playing Mozart's String Quintet in D Major for him at London's Wigmore Hall. She thinks his Chuck Berry music is 'bouncy and merry' and proposes naming a daughter Chloe. We learn Edward has a violent streak, having once beaten a man who flung a racial slur at a friend on the street, a protective urge expressing the social ostracism experienced because of his mother's condition. Upon viewing Florence's incredible patience and understanding of his wife, Edward's father urges him to marry this marvelous girl. Edward, meanwhile, puts up with the ridiculous competitiveness of Florence's father during a game of tennis. This is the man who would be his boss, the Pontings assuming aspiring writer Edward will join the family manufacturing firm. Cracks appear on Florence's side as well, the local pastor divining a troubled spirit during a pre-wedding tea. The man she told her sister she loved because he was different ('He always wears plimsolls, never shoes!') is now like the other men she reads about in a sex manual, horrified by descriptions of engorgement and penetration. One brief glimpse of a much younger Florence sleepless on a sailing trip with father hints at trauma. Cooke's production is lovely, the countrified chaos of the cramped Mayhew household in stark contrast to the neatly ordered refinement of the Ponting manse. The ensemble cast ensure we feel love in the former, cool simmering resentments in the latter, Scarborough and Duff and West and Watson's contributions aiding immeasurably to the psychological makeup of their characters' children. Ronan and Howle both play damaged individuals, Ronan choosing control to cope, Howle a more childlike yearning. If one comes away from reading 'On Chesil Beach' with thoughts of 'if only...,' one comes away from the film feeling the same way for different reasons. What McEwan's words on the page convey as a failure of repressed communication instead come across on screen as childish lack of empathy. Still, one cannot help but be moved when an older Edward meets a young girl named Chloe (Bronte Carmichael), or when, even later, he takes the ninth seat in row C of Wigmore Hall. Grade: