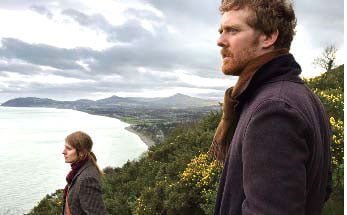 A Dublin busker makes fun of the young Eastern European immigrant (Markéta Irglová) who throws ten cents into his guitar case and becomes at turns amused and annoyed by her persistent attempts to draw him into conversation. But once they make sweet music together, he realizes he has met his soul mate, if only just this "Once."

Writer/director John Carney has fashioned a unique twist on the musical with this affecting story of unrequited love between a couple who express their emotions through their song lyrics. Featuring Glen Hansard, the founder of the Irish band The Frames, as the busker with dreams of recording made real by the encouraging and dogged Czech accompanist he meets on the streets, "Once" is a musical whose songs are don't merely reflect the plot but compose it. The Czech girl, a rose seller who seems at first a pushy Gypsy, mellows into something else entirely when she leads the guitarist into the music shop that lets her use their piano. Her beautiful rendition of Mendelssohn turns into ad hoc accompaniment, including soft and wispy vocals, of one of his songs. He's brought home to meet her mother and is surprised to find a little girl whose father has been left back home. Their off the cuff duet becomes a regular thing and she secures them a loan with chutzpah and a amateur recording then finagles a recording studio for a weekend. Joined by a bass player and drummer, the ragtag bunch turn a seasoned producer from derision to admiration in a matter of hours. "Once" was this year's Sundance Audience Award winner and for once the altitude didn't seem to affect their judgement. Carney's exquisitely crafted little film reels us in with little unexpected character touches matched with well utilized genre traditions. When the girl finds her in with the singer via a broken 'hoover' (he works with his dad repairing vacuums), it follows her around all day like a dog at the end of a leash, but in Carney's hands the device is never cutesy. Music as a universal means of human connection is touched upon not only by the ethnicities of the central couple, but by the bank manager who pulls out his own instrument for an impromptu display of fellowship and the sprawling family in the studio. The musical build, solos to duet to full band, is similar in structure to "Hustle and Flow," but the construction is more subtle. Carney's script also includes dialogue as lovely to the ear as Hansard and Irglová's lyrics. He works the words as a second language so that a curse or an antiquated phrase sounds charming coming from Markéta, who also uses her native Czech to tell the uncomprehending Hansard what she feels. There's nothing like a love that is obviously true but thwarted to rend one's heart and "Once" puts that feeling to glorious music.

The Guy (Glen Hassard) is a talented Dublin street musician who supplements his meager income playing guitar and singing by working in a vacuum cleaner repair shop. He keeps crossing paths with the Girl (Marketa Irglova), a street flower seller who is impressed with his obvious musical ability. Together, they make beautiful music in “Once.” Writer/director John Carney cloaks a nicely unfolding romance in the guise of a musical. The Guy sings his songs on the streets during the day to pay the bills. At night, though, when no one gives him any attention, he sings the songs that he wrote for himself. The Girl appreciates his songster skills and, being a capable pianist herself, is drawn to the street artist. The result is a plethora of original tunes that are, in a word, excellent. The nice chemistry between the two principals is the glue that holds the music together. Once” combines romance and music with skill, as the Guy and Girl grow closer and they work together to make their musical collaboration commercially viable. The story follows the couple through the trials and tribulation, occasionally with the help of others, as they strive to get his songs professionally recorded. The kindness of others is believable because of the sound artistic quality of the Guy’s songs. Hassard and Irglova, newcomers to feature film, show both natural acting skills and terrific musical ability. “Once” is a two-hander that utilizes this new talent effectively and entertainingly. It is aimed at those who love music and musicals but the love story that develops has nice appeal, too.