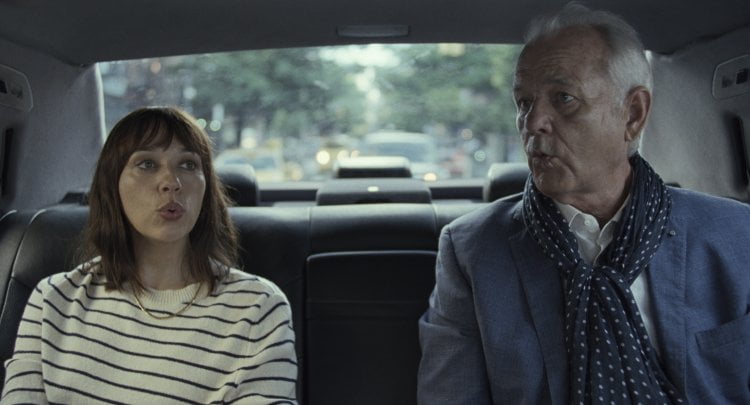 Laura (Rashida Jones) is surprised when her husband Dean (Marlon Wayans) begins to kiss her hungrily after slipping into bed on his return from a business trip to London and when she gets his attention, he seems confused.  Then there’s the women’s toiletry bag she finds unpacking his luggage, something he casually passes off as his assistant Fiona (Jessica Henwick) not having room in her carry on.  When Laura confides all this in her bon vivant dad Felix (Bill Murray) he believes the worst and encourages her to spy on Dean to see if their marriage is really “On the Rocks.”

Writer/director Sofia Coppola returns with a father daughter caper movie that plays like Kay Thompson’s Eloise crossed with “Manhattan Murder Mystery.”  It’s a cute film which cheats a bit stacking its deck against a foregone conclusion but which soars whenever Coppola’s “Lost in Translation” star is on screen.  “On the Rocks” features the Bill Murrayist of Bill Murray roles, Felix so much how we imagine the real Murray to be that at one point Laura notes ‘It must be nice to be you.’  ‘Wouldn’t have it any other way,’ Felix tosses off.

One wonders how much Coppola’s co-opted from her own life.  The film opens with Laura and Dean’s incredibly swanky and tasteful NYC wedding before transporting them to a well lived-in Lower Manhattan apartment with their young daughters Maya (Liyanna Muscat) and Theo (Alexandra Mary Reimer).  Dean’s always rushing somewhere work related.  Laura’s always rushing somewhere child related, struggling with beginning a book she’s already been paid for during daytime hours that don’t reflect her natural writing rhythm.  Meeting her husband at a work party, she’s introduced to that toiletry bag owner, who in turn introduces her to two women who behave awkwardly as Fiona rejoins Dean, touching his arm possessively.

But “On the Rocks” is really about Laura’s relationship with her dad, a former art gallery owner driven around town by Musto (Musto Pelinkovicci) in a Mercedes sedan who flirts with every female who crosses his path and never misses an opportunity to explain men’s primal mating instincts.  When Felix learns Dean will be away for his daughter’s birthday, he’s outraged that she isn’t receiving the red carpet treatment that she deserves.  The contrast between Dean’s Face Time surprise and dinner at 21 with Felix couldn’t be greater, her romantic partner practical, her parent the romantic.  But Felix will push snooping on Dean too far, causing Laura to spill pent up emotions about the infidelity which ended her parents marriage.

Murray is phenomenal here, an old world charmer with a melancholy soul.  In the film’s best scene, he’s pulled over by Officer O'Callaghan (Mike Keller) for reckless driving yet departs with a roadside assist and back slapping good will.  Murray might make us laugh throughout, but upon forced reflection of his long ago affair he can also rip your heart out.  With Laura, Coppola has gone the Woody Allen route of creating a cinematic alter ego and Jones is solid as Murray’s sympathetic straight man.  Watch for the original television ‘Mission: Impossible’s’ Barbara Bain as Laura’s Gran.  In a small, continuing bit, Jenny Slate is hilarious as an extremely self-absorbed school mom.

Coppola’s script features some simply beautiful dialogue, like Felix recalling the first time he saw his daughter ‘as a person’ at 9 months, as well as moving silences, like Felix and Laura regarding a Monet water lily painting together as if in prayer.  The production casts the New York City of the privileged, martinis ordered in one famous haunt after another, caviar consumed in an Alfa Romeo convertible.  Costuming finds Murray dressing the part of the dapper art connoisseur while Laura’s casual mom clothing is contrasted with Fiona’s sexy sleek business attire.  Coppola tapped her husband’s band Phoenix for a lively, multi-varied score featuring everything from retro jazz to baroque classical to Mariachi.

Laura (Rashida Jones) is happily married to Dean (Marlon Wayans) and they have two lovely children. Then Dean starts working crazy long hours with a new, and gorgeous, colleague and Laura’s mind runs amok with speculation. Enter her somewhat estranged playboy dad, Felix (Bill Murray), who plants seeds of suspicion in his daughter’s head in “On the Rocks.”

The latest by writer-director Sofia Coppola reteams her with Bill Murray (“Lost in Translation (2003)” was their first collaboration) is a Hollywood version of “real” life. By that, I mean, everyone is well-to-do and can drop things in a moment to go off on an adventure.

Laura lives the American dream of a blissful family life, caring for her girls, Maya (Lianna Muscat) and Theo (Alexandra Mary Reimer), and supporting her hard-working husband. Then, while unpacking Dean’s suitcase after a business trip, she finds a woman’s cosmetic bag, with a large bottle of body oil inside. The seeds of doubt are first sown. Then, she gets a surprise call from her dad, who happens to be in the city and invites her to lunch. There, she voices her suspicions.

This triggers Felix to begin an elaborate surveillance campaign to prove that Dean is a philanderer and untrue to Laura. Assured that he will have the upmost discretion and secrecy, he arrives at Laura’s in a vintage Alpha Romero sports car that badly needs engine work and makes a racket, Their mission leads to Felix’s many hi-jinx, charming the ladies and talking himself out of trouble with the cops.

Surprisingly, the original story by Sofia Coppola, is anything but original. There is a been-there-before feel to “On the Rocks.” It is a pleasant little journey but one that depends on and belongs to Bill Murray.