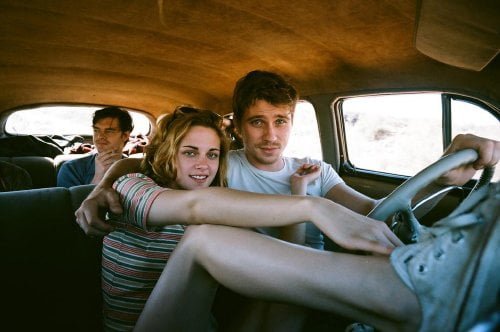 In 1947, Sal Paradise (Sam Riley, "Control") is toiling at becoming a writer in New York City when Dean Moriarty (Garrett Hedlund, "Country Strong," "TRON: Legacy"), a man from the west, opens his eyes to new ideas about music, women and life "On the Road." Eight years after his last autobiographical road movie, "The Motorcycle Diaries," director Walter Salles takes on the American Beat classic with his "Diaries" screenwriter Jose Rivera ("Letters to Juliet") adapting Jack Kerouac with uneven results. "On the Road" is a film of particular moments, but although it ends well, having gained some momentum as it rolls along, that's mostly due to Garrett Hedlund's performance as the Neal Cassady stand in. Sam Riley just feels all wrong as Paradise/Kerouac, utilizing a rasp that shows every bit of effort used to produce it. Dean's hedonism is shocking in post-war America, but it's also like someone threw open a window. Sal knocks on a door which is answered by Dean in the nude. He follows Dean to the equally progressive Rita Bettancourt's (Tiio Horn, " Journey to the Center of the Earth," "Immortals") and is invited to make a threesome. The duo begin to zigzag across the country and back, often with little or no money and often with members of their circle, including Dean's teenaged lover Marylou (Kristen Stewart, the "Twilight" series, in a daring, lived-in performance). One of Sal's solo excursions has him meet Terry (Alice Braga, "I Am Legend," "Predators") on a bus and join her as a migratory cotton picker and this section feels both true and the light counterpart to Freddie Quell's similar but deadly experience in "The Master." The road is open and the sky big here. But other stops along the road are less satisfying, like travels with Ed Dunkle (Danny Morgan) whose furious wife Galatea ('Mad Men's' Elisabeth Moss) was left behind. This is just one episode that has resulted in charges of misogyny against the book and the women here are an odd mix of coconspirators (Rita, Marylou to a degree), balls and chains (Galatea and Cassady's miserable wife Camille (Kirsten Dunst, "Melancholia," "Bachelorette")) and the barely drawn (Jane/Joan Vollmer, Amy Adams, "Trouble with the Curve," "The Master"). The latter is the common-law wife of Kerouac's William S. Burroughs, Old Bull Lee ("The Lord of the Rings'" Viggo Mortensen), who shows off the orgone accumulator in his rural home's yard. Famous people flit in and out of the picture like random episodes. Tom Sturridge ("Brothers of the Head," "Pirate Radio") impresses as Carlo Marx (Allen Ginsberg), of whom it is said that 'by the time he's 21, 23 he's gonna write one great poem and he'll be over,' and, of course, Sal receives 'Howl' in the mail to read. Stewart pulls off a teenager older than her years who still seems like a teenager. Her Marylou is free as a bird (a jazz dance is breathtaking) but yearning for commitment and convention at heart. But the meat of the film is in the relationship between the opportunistic (or is he?) Dean, who even leaves Sal alone in Mexico when the latter falls ill, and Sal. There is more than a bromance going on here and the film's final moments pack quite a punch. Riley eventually somewhat grows into his role, but Hedlund grabs us and never lets go.

Sal Paradise (Sam Riley) is a struggling young writer living in New York City. His life is about to change when he meets Dean Moriarty (Garrett Hedlund) and his girlfriend Marylou (Kristen Stewart) and they begin their journey across the country and into their souls when they go “On the Road.” Brazilian-born director Walter Salles is the first filmmaker, since Jack Kerouac published his definitive novel about the Beat Generation in 1957, to tackle his story about a generation awakening to a bold new world. The story, though, does not stand the test of time. The world has changed many times, and more drastically, since Kerouac wowed the literary world with his cutting edge view into the burgeoning youth of America. This makes “On the Road” a bit of a sociological relic as Sam and his friends find the earlier version, 1940s style, of “sex, drugs and rock ‘n’ roll.” This 2+ hour adaptation (by Jose Rivera) spends most of its time on two things: sex, with various participants, and a lot of driving to and from various parts of the American landscape. The script does, episodically, tell of Sal’s development as a human being and a writer – his voice-over beat poetry, with appropriate jazz accompaniment, show his dedication to his “art.” Characters come and go in Sal’s life as he tries to find himself through different means – booze, dope, jazz and random sex. Of course, “On the Road” is a flimsily-veiled autobiography of the book’s author and the different characters are based on real people, like Allen Ginsberg (Tom Sturridge), Neal Cassidy (Garrett Hedlund) and William S. Burroughs (Viggo Mortensen). The trouble is, I do not care about any of these selfish hedonists. The filmmakers spend a lot of time on the film’s look and ambiance, setting the moodiness of the late 40s and early 50s through the eyes of Sal. Instead of a fully developed story, we get a series of vignettes as the protagonist samples various aspects of hedonism introduced to him by, primarily, Dean. And, he writes, sometimes. And they all drive. A lot. It has been over 60 years since Kerouac finished his second novel and it has not, until now, been turned into a movie. Maybe its time has passed.