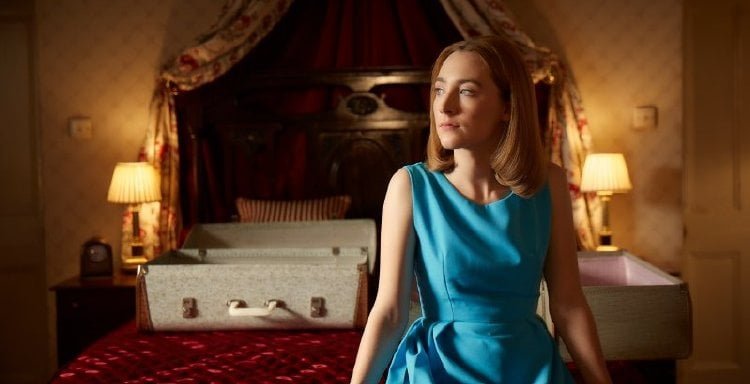 In 1962, Oxford graduate and violinist Florence Ponting (Saoirse Ronan) rebels against her conservative parents Geoffrey (Samuel West) and Violet (Emily Watson) by protesting the bomb and meets eyes with aspiring writer and Chuck Berry enthusiast Edward Mayhew (Ronan's "The Seagull" costar Billy Howle). Their romance allows Florence to also rebel against her parents' snobbery, Edward's schoolmaster dad Lionel (Adrian Scarborough) and brain damaged artist mom Marjorie (Anne-Marie Duff) considered beneath them. The two are perfect for each other, but Florence's past introduces another, more insurmountable divide on her and Edward's wedding night "On Chesil Beach."

Ian McEwan has adapted his own, heartbreaking 2007 novel for the screen and even he has apparently had difficulty cracking the interior lives of his young, would be lovers. The film is beautifully cast and stage director Dominic Cooke, making his feature debut, has made it resplendent with period detail except in the one instance that matters most here, the sexual repression of the times. Those who come into the film without having read McEwan's novel are likely to come away with an opinion of Florence and Edward the author never intended. Like the novel, the film focuses on a disastrous honeymoon, filling in detail through flashback, before flashforwarding into the future (the adaptation adds additional scenes in later years, some of which work, others which do not). The young, formally dressed couple are visibly avoiding the bed which dominates their typically British seaside hotel room. Their conversation is more relaxed, at least until room service arrives, two waiters determined to stand at attendance until their main course of roast beef, potatoes and peas is served, Edward's inexperience with such worldly rituals causing him to cave. The burst of laughter that follows the waiters' withdrawal only accentuates that which looms. We then get a glimpse of Edward's background, the bookish boy glimpsing out his bedroom window only to observe his mother nude in the garden. His father comes and covers her, tenderly leading her into the house, his younger twin sisters (Anna and Mia Burgess) closing rank. Female nudity is, therefore, something Edward has been regularly exposed to although it has been tinged with shame. Florence is seen sitting at a dining room table across from her sister (Bebe Cave), her mother sitting at table's head, a martinet in pearls obsessed with good breeding. Florence, who leads her Ennis Moore Quartet much like her mother rules her household, introduces Edward to classical music, dreaming of one day playing Mozart's String Quintet in D Major for him at London's Wigmore Hall. She thinks his Chuck Berry music is 'bouncy and merry' and proposes naming a daughter Chloe. We learn Edward has a violent streak, having once beaten a man who flung a racial slur at a friend on the street, a protective urge expressing the social ostracism experienced because of his mother's condition. Upon viewing Florence's incredible patience and understanding of his wife, Edward's father urges him to marry this marvelous girl. Edward, meanwhile, puts up with the ridiculous competitiveness of Florence's father during a game of tennis. This is the man who would be his boss, the Pontings assuming aspiring writer Edward will join the family manufacturing firm. Cracks appear on Florence's side as well, the local pastor divining a troubled spirit during a pre-wedding tea. The man she told her sister she loved because he was different ('He always wears plimsolls, never shoes!') is now like the other men she reads about in a sex manual, horrified by descriptions of engorgement and penetration. One brief glimpse of a much younger Florence sleepless on a sailing trip with father hints at trauma. Cooke's production is lovely, the countrified chaos of the cramped Mayhew household in stark contrast to the neatly ordered refinement of the Ponting manse. The ensemble cast ensure we feel love in the former, cool simmering resentments in the latter, Scarborough and Duff and West and Watson's contributions aiding immeasurably to the psychological makeup of their characters' children. Ronan and Howle both play damaged individuals, Ronan choosing control to cope, Howle a more childlike yearning. If one comes away from reading 'On Chesil Beach' with thoughts of 'if only...,' one comes away from the film feeling the same way for different reasons. What McEwan's words on the page convey as a failure of repressed communication instead come across on screen as childish lack of empathy. Still, one cannot help but be moved when an older Edward meets a young girl named Chloe (Bronte Carmichael), or when, even later, he takes the ninth seat in row C of Wigmore Hall. Grade: