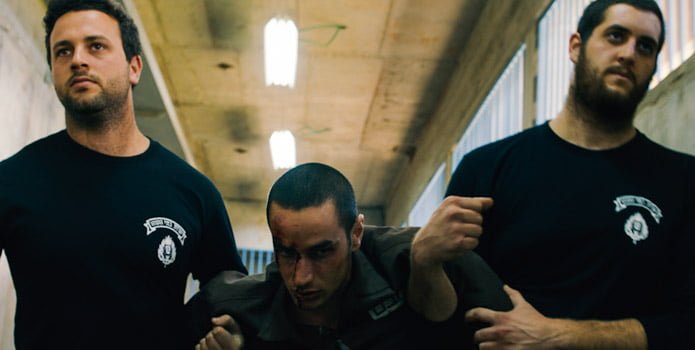 Palestinian director Hany Abu-Assad gave a human face to suicide bombers in "Paradise Now." With his latest Oscar-nominated film, Abu-Assad casts the possibility of political betrayal against betrayals of the human heart and the result is an emotional thriller with real world ramifications. The young cast making their film debuts keep us guessing as to just who's playing whom with the film itself playing like a more modestly scaled Occupied Territories version of "Casablanca." Life in Palestine isn't just segregated from its Israeli neighbors, but subdivided within itself. Such everyday routines as going to work may involve scaling a wall and risking death. When we first see Omar go over, he barely makes it. He's just a kid, really, wanting to hang with his pals and flirt with Nadja, who teases him into his Brando impersonation before she'll serve him tea. Tarek appears oblivious to his friends' attentions to his sister, but he has far more serious things to worry about. The three go on a 'training' session, but they're always joking about. Abu-Assad makes a deft shift as things turn deadly serious when the amateur-seeming trio accomplish their mission, but not their escape plan. When Omar is caught, there is no evidence against him, but the wily Rami catches him up with slippery legalese and Omar finds himself facing 90 years if he doesn't cooperate. Sent back into civilian life, he's walking a mine field - unable to tell Nadja about his heroic acts, Tarek wondering why he was beaten and Amjad meeting with Nadja behind his back. After attempting to doublecross the Israelis, Omar begs for one more chance and a bombshell of personal revelation gives Omar the motivation to carry through - just what will he do? Omar remember's Tarek's fable about killing monkeys in Africa. "Omar" is a twisty thriller about trust among friends and how romance can complicate that trust. That those friends happen to be Palestinian Freedom Fighters raises the stakes to life and death. The young actors are all natural performers, each responsible for conveying a different piece of the puzzle with some amount of ambiguity. The lone professional actor, Zuaiter, is terrific as the Israeli agent - tough but not without reserves of sympathy for Omar's situation. Even if you're fairly certain how events will play out, "Omar's" ending packs a mighty punch. ("Omar" is the Palestinian entry for the Foreign Language Oscar and is on of the five 2014 nominees.)

Submitted as the Palestinian entry for best documentary feature for this year’s Oscar, “Omar” is the bookend to the Israeli entry, “Bethlehem.” Both films deal with loyalty and betrayal, but “Omar” makes things more complex, in a good way, with a love triangle smoldering beneath the political intrigues and violence of the ongoing Palestine/Israel conflict. Omar (Adam Bakri) is in love with his best friend Tarek’s (Iyad Hoorani) sister, Nadia (Leem Lubany), and scales the Wall every day to see her. But there is more going on than romance when Omar, Tarek and their friend Amjad (Samer Bisharat) learn how to use a sniper rifle with the plan to strike at an Israeli border checkpoint. Their action will unleash a course of events that will dramatically affect all. Israel-born Palestinian director Hany-Abu-Assad, utilizing unknowns to fill nearly all the character roles, creates an involving story that makes you care about Omar and those he loves. It is an affective piece of filmmaking and garners empathy for Omar. The fact that the helmer gets such solid performances from newcomers is, in itself, remarkable.