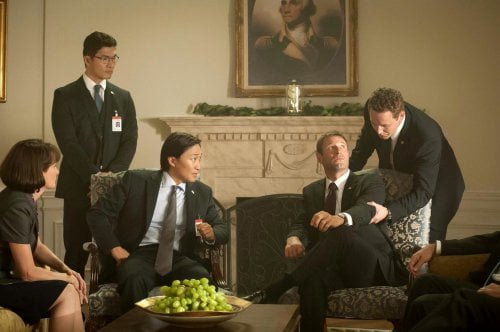 Mike Banning (Gerard Butler, "Playing for Keeps") is the most trusted of President Benjamin Asher's (Aaron Eckhart, "The Dark Knight") Secret Service, but after the loss of the First Lady (Ashley Judd) during a Christmas Eve accident, Banning takes a desk job. Eighteen months later, he sees a disturbing sight outside of his window and races to the White House to find it under attack by North Korean terrorists. Banning never thought he'd have to utter the words "Olympus Has Fallen."

Director Antoine Fuqua ("Training Day," "Brooklyn's Finest") serves up a popcorn movie with extra butter in this film whose realistic violence trumps special effects and whose cast outclasses the script. Already known as the 'Die Hard in the White House' movie, first time screenwriters Creighton Rothenberger & Katrin Benedikt pay 'the sincerest form of flattery' to not only that film but several more. With Kim Jong-un's recent saber rattling, at least they've chosen a timely enemy. Although it's never entirely clear if Banning was pushed out or stressed out (the former seems apparent, although the President and his son still seem to hold him in high regard) we get title cards to announce the obvious, including the name and rank of several characters at their first appearance. Banning shares coffee with one such, Secret Service Director Lynn Jacobs (Angela Bassett, " Jumping the Broom"), in a scene that appears to exist to establish Banning's poor relationship with Speaker of the House Trumbull (Morgan Freeman) - except that that never enters the scheme of things. Fuqua stages the taking of the White House in thirteen minutes of real time, from the USAF plane which enters protected air space to the North Korean commandos who emerge from their covers as tourists and garbage men to physically walk into 'Olympus.' The director based his timing on the real life fact that it would take fifteen minutes for the military to arrive at 1600 Penn and has stated he wanted to make everything as realistic as possible. As explosively destructive as this all is, it follows the tropes of highlighting national monuments and when the attacking plane's wing slashes a hole into the Washington Monument for that 9/11 moment, we must wonder what's producing the black smoke rising from a stone structure. An American flag ripples to the ground so perfectly it's obvious it is not real. The President has been meeting with South Korean PM Mr. Lee (Keong Sim, 'Glee's' Mike Chang Sr.) and when he's hustled into his bunker, the Presidential Emergency Operations Center (PEOC), he disregards protocol (as Banning didn't when the First Lady was lost) and takes Lee with him. And so he's also taken Kang (Rick Yune, "The Fast and the Furious"), another inside plant and the mastermind of the attack. The film alternates among three locations - Banning creeping about the White House, PEOC and the command center for Trumbull (now Acting President surrounded by council) with occasional visits to Banning's anxious wife (Radha Mitchell, "High Art," "Silent Hill"), a nurse performing triage on victims of the attack. Kang wants the 7th Fleet recalled, all but dooming South Korea, and he wants the three codes necessary to activate Cerebus, a Top Secret program to disable nuclear devices should they have been released in error. Happily he has the three people he needs so he can begin torturing them while executing others to force his first demand. Meanwhile the President's young son Connor (Finley Jacobsen, "Marley & Me") is being sought out by both Banning and the bad guys (allowing Fuqua to explore the secret passages behind White House walls). Fuqua knows how to make violence truly felt, whether by the suddenness of the taking of a life or by the time taken to beat a woman (Melissa Leo's Secretary of Defense gets one good going over). There are also several Lincoln references from the Oval Office bust turned into a weapon, to his bedroom's use as a set and a late shot of the Washington Monument encased in scaffolding, as it would have been in Lincoln's time. The action rushes along at warp speed. The direction is solid enough to cover some scripting deficiencies, but when an obvious Secret Service baddie shows up to nervously have a smoke with Banning (as Hans Gruber did with John McLean), it's hard not to burst out laughing at the sheer chutzpah of the lift. There is also little drama about the Speaker's taking power other than one opportunity for Morgan Freeman to slap someone down and the score by Trevor Morris (TV's 'Body of Proof') features the expected military snare drums. Butler's far more in his element here than romantic comedy and he carries the film well enough. Everyone is believable but that actor who parades his duplicitousness (and is given the most ludicrously vague line about globalization and Wall St. to explain his treason). Yune has his own femme fatale sidekick in Malana Lea and the two keep it just this side of camp. The movie also features Robert Forster ("Jackie Brown") as General Edward Clegg. Fuqua's delivered a solid actioner here. "Olympus Has Fallen" has a lot of problems, but boredom won't be one of them.