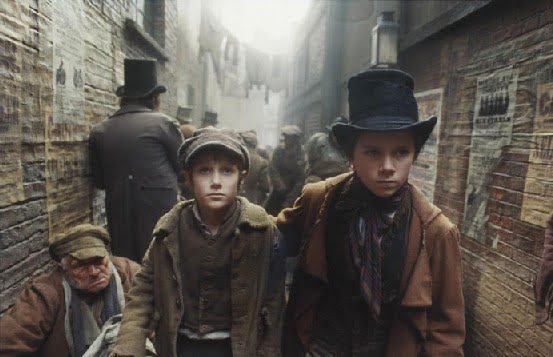 Charles Dickens’s classic story about an orphan ragamuffin living on the streets of early 19th century London was first brought the silver screen in 1922 (with Jackie Coogan in the title role) and done umpteen times, including a musical version, since then. Now, movie maestro Roman Polanski takes on the task of telling the orphaned youngster’s story in his version of “Oliver Twist.”

'This is a pleasant life, ain't it my dear?' Fagin to Oliver In nineteenth century England, a young orphaned boy is raised cruelly by the local parish. After the starving child has the nerve to ask for more gruel, Mr. Bumble (Jeremy Swift, "Gosford Park") endeavors to be rid of him in an apprenticeship, but horrible treatment continues in the mortician Sowerberry's household so the lad runs away, walking all the way to London where he falls in with a band of pickpockets led by the old thief Fagin (Ben Kingsley, "House of Sand and Fog"). More hardships and horrors await within the villainous London underworld before good fortune will shine on "Oliver Twist." Director Roman Polanski follows up his Oscar-winning "The Pianist" with his first adaptation (screenplay by Ronald Hardwood, "The Pianist") of a literary classic since 1979's "Tess." But Thomas Hardy's work ("Tess of the d'Urbervilles") hadn't been adapted for the screen since the silent era, which is when Dickens' much-filmed work also first appeared on screen. Granted, while there have been television interpretations, Oliver Twist hasn't appeared on the big screen since Carol Reed's Best Picture winner, the musical "Oliver!," in 1968, but while Polanski's version is certainly a handsome production, the definitive version is still David Lean's 1948 black and white telling. Polanski, whose own childhood spent hiding from Nazis during the Holocaust after his parents were taken to concentration camps parallels this material, gives his "Oliver" two prominent twists which impart a 'there but for the grace of God go I' undercurrent. Firstly, the specter of the noose hangs heavily over this production, with Oliver's first job in the workhouse being the picking apart of ropes for fibers to be reused by the British Navy. The lad is frequently referred to as a future fair game for the hangman. Fagin has a heart-to-heart with Oliver over the horrors of hanging, and, of course, there is Bill Sikes' ironic end as well as the gallows being built for Fagin as he awaits the fulfillment of his sentence at film's conclusion. Secondly, Polanski includes Oliver's visit, with Brownlow (Edward Hardwicke, "Love Actually"), to the hellish jail and his former mentor where most film versions usually wrap with Oliver happily reensconced in Brownlow's household. Polanski has assembled a fine cast, although many are overshadowed by those who played the roles before them. Young Barney Clark ("The Lawless Heart") certainly has the right look for Oliver, often appearing frail and sickly, but does little to really distinguish himself. Harry Eden (2003's "Peter Pan") is a bland Artful Dodger, the character's impish mischievousness toned way down, his physical schtick's footwork with Charley Bates (Lewis Chase) appearing practiced and false. (The privileged lad with the hoop that they bedevil is credited as a Polanski, as is a young girl who plays a farmer's daughter.) It is Kingsley, of course, who will draw the most attention and his Fagin is just dandy, an arthritic old man who cares for his lads but loves his loot more. Flickers of decency sneak past his rheumy old eyes, but Kingsley also sparks with the capability of murder. Still, he's no match for 1948's Alec Guinness, just as Jamie Foreman ("Layer Cake") cannot touch Oliver Reed's 1968 villainy as Bill Sikes. Foreman plays the role as more of a simple brute. Leanne Rowe (1996's "Jane Eyre") makes a credible and sympathetic Nancy. One's attention is called more than the character would normally warrant to Toby Crackit (Mark Strong, "Sunshine"), a colleague of Sikes', because he's been visually realized as if Gene Wilder were playing Lemony Snicket's Count Orlock. Hardwood's script is faithful to the slang of the day, Fagin's request to Artful to'dodge' their friend Nancy when she visits London Bridge to 'peach' to Brownlow, thereby raining down the 'traps' upon their heads. Production design (Allan Starski, "The Pianist), art direction (Jindrich Kocí, "The League of Extraordinary Gentlemen") and costuming (Anna B. Sheppard, "Around the World in 80 Days," "The Pianist") favor suitably grimy gray browns, with period London convincingly recreated in Prague. Pawel Edelman's ("The Pianist," "Ray") camerawork is unusually dark, reflecting the drab lighting of the time. Rachel Portman's ("The Manchurian Candidate," "Because of Winn-Dixie") score overcues violent scenes. "Oliver Twist" is another personal curveball from Polanski and it fits admirably into his filmography. However it is certainly not among his great movies and works best as a classic for a generation who may shun musicals and black and white photography.

The only question I had going in to Polanski’s “Oliver Twist” was: why bother? The story has been told many times before, including the expertly fashioned 1948 version by film great David Lean, and I wondered, what is the point? The answer is that Roman Polanski viewed the classic tale as an allegory to his own life as a young boy trying to survive the Polish ghettos after the death of his parents in a Nazi concentration camp during World War II. As such, the filmmaker has a real stake in the Dickens’s tale and lends his master’s touch in creating his own view of the life of Oliver. Polanski eschewed casting his version of “Oliver Twist” with big name stars with one exception – Ben Kingsley as the grizzled thief-maker, Fagin. The rest of the well cast character actors are, except one or two recognizable names, not known to most Americans. But, this does not mean that they do not well convey the many personas of the story. Young Barney Clark plays the title character and gives a good performance as the poor but well raised, good mannered orphan who captures the hearts of the good people that he meets along the way. The young actor is first among equals as Polanski gives proper shrift to the many, many characters that populate the Dickens tale. For those few uninitiated to the story of “Oliver Twist,” the boy’s story begins as the 10-year old orphan is unceremoniously dragged, by the pompous, officious Mr. Bumble (Jeremy Smith), to a dark and dreary workhouse. The boy, and the rest of the inmates, toil long hours for very little food. Driven by their hunger, Oliver is selected by lot to tell his uncaring keepers, “Please, sir. I want more.” Branded a troublemaker, the lad is to be indentured to a coffin-maker where he is cruelly and unjustly beaten for standing up for his deceased mother. Oliver runs away from this terrible plight and makes the long, long journey to London where he meets a roguish character called the Artful Dodger (Harry Eden) and offered a place to stay. There, he meets the Dodger’s boss, Fagin, and Oliver’s story takes many turns, some good, some horrid. The cruelties and kindnesses that greet the boy make “Oliver Twist” the classic, timeless tale that it truly is. For the screenplay of “Oliver Twist” Polanski turned to his “The Pianist” scribe, Ronald Harwood, to adapt the classic tale and the result is faithful (mostly) to its source. Another strength of the film is the outstanding production design, by Allan Starski, that captures the filth and squalor of the poor living in Dickens’s London as well as the opulent life at the top end of the city’s strata. Anna B. Sheppard terrific costuming is equal to the production and it, too, shows the foulness of the poor and the luxurious threads of the rich. These elements, combined with Pawel Edelman’s lush and lively lensing, make this a superior period piece. Deft direction, solid acting and exemplary production make “Oliver Twist” a worthy telling of the classic story and are the resounding answer to my earlier question: why bother? The parallels between Dickens’s world and the struggling world around us make this a story that is surely a film for old and young alike.