Oliver Sacks: His Own Life 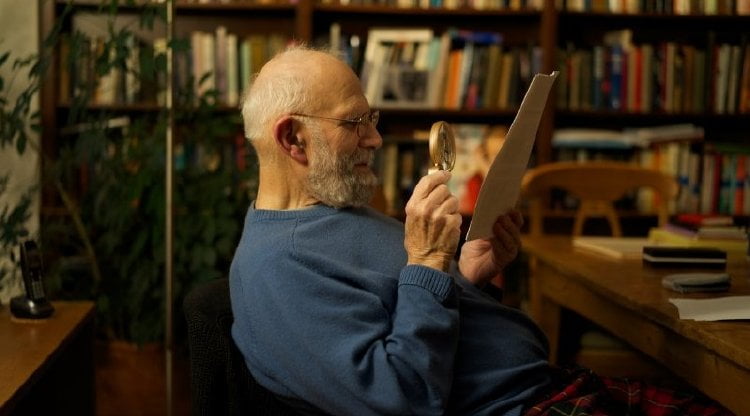 In 2016, just after receiving an incurable cancer diagnosis and completing his autobiography, his editor-and-so-much-more Kate Edgar arrived for Dr. Oliver Sacks to spend eighty hours with director Ric Burns, colleagues and friends and his notebooks ruminating on “Oliver Sacks: His Own Life.”

Most well known for his case study book which became an unlikely best seller “The Man Who Mistook His Wife for a Hat” and his earlier book, “Awakenings,” adapted into a movie by Penny Marshall, Oliver Sacks waited for decades to be embraced by fellow neurologists, who viewed his observational approach to medicine as lesser than their experimental method.  Interestingly enough, we also learn he was celibate for decades, having had the misfortunate of falling in love with heterosexual men until meeting the love of his life in his later years.

He describes his youth as destructive, mostly because of an amphetamine addiction, but it is also revelatory.  Imagine having a mother who is a surgeon who suggests you dissect the encyphelatic fetuses she’s brought home – when you are ten years old!  A beloved older brother was diagnosed as schizophrenic at fifteen, an event which made Oliver both fearful and determined to understand the disease.  His experiences resulted in an incredibly compassionate approach, one in which he sought to understand and treat the person rather than the disease.

Burns fills in Sacks’s recollections and story telling with stills (we see him in leathers astride a motorcycle as a young man in San Francisco) and archival footage, like his fascinating real life encounters with the patients of “Awakenings,” whose regressions after startling, early results are bleaker and more unsettling than what we saw in Marshall’s movie.

Sacks’s unique approach to his field is paired here with the books he published throughout his career, the doctor, when asked, stating that he views himself as much a writer as medical man.  But Burns insures we also get a sense of the man largely through his sense of humor.  Sacks confides that his love of the periodic table is so great, its featured on everything from his bedspread to his socks.  Then there’s that great anecdote about Jello…

If you are old, like me, you might remember the L-Dopa drug controversy in the late 60s. The man behind that controversy – exonerated and honored since – also led a colorful life as a world renowned neurologist, naturalist, gay-rights proponent and author, published in 25 languages, we learn all about in “Oliver Sacks: His Own Life.”

While watching this in-depth look at the life and times of Oliver Sacks, I realized that my previous knowledge of the man was relegated to the dopamine “scandal” and the feature film, “Awakenings (1990),” starring Robin Williams and Robert DeNiro. Longtime documentary filmmaker Ric Burns corrects that lack of knowledge with his biography of Oliver Sacks, a fascinating man by any measure.

The man, himself, provides the bulk of material for the examination of a life that was lived to the fullest. Born and educated in England, he came out at 18 years old during a time in Britain when homosexuality was a crime where forced sterilization was used as punishment. He became a body builder to help his self esteem, but being gay in England prevented that, prompting Sacks to migrate, first to Canada then to the US and San Francisco.

The move turned his life around and he began to become the man he would later be. He freely talks about his longtime drug addiction, coping with it and getting to the other side. Sacks went on to write some 30 books, mainly about his research into dementia and psychotic behavior and his many case studies – his own brother, Michael, suffered deep psychosis and this was the catalyst that launched Oliver’s career in neurology. The passion Sacks feels for his work comes through palpably as we get to know him and his research.

In the hour and 51 minutes we spend with Oliver Sacks, he goes from being this enigma that I knew little about to a guy I grew to like and wanted to keep around. His lust for life was so intense that he rushed to finish his last book so he would know it was published before he died at age 83. He was surprised he lived that long, saying he “never expected to reach 80” and “never expected to reach 40!” What a man!