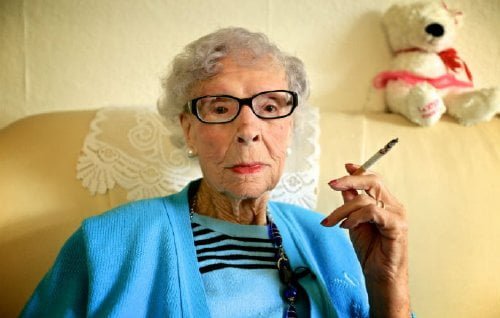 Filmmaker Alex Fegan assembles 30 elderly Irish folk and they discuss their lives, their loves and their stories. So, what’s the big deal about a bunch of old people? Well, the youngest in the group is 100 years old and all were born before the 1916 Easter Uprising and the dawn of the Irish Republic, making them all “Older than Ireland.”

Writer/director Alex Fegan ("The Irish Pub") creates a historical oral tapestry via the sometimes hilarious, sometimes wistful, sometimes sad, often contradictory reflections of thirty Irish centenarians who have witnessed life since the earliest days of their country's independence. We first see the face of the film, 103 year-old Bessie Nolan, come down the stairs of her home, elegantly dressed and coiffed, to take a seat and light a cigarette, and she is one of many who appear to live independently in their own homes. Many are quite vigorous, one man seen walking into town to buy his groceries, another digging a ditch. Fegan uses a series of questions, unheard by us, to group his subjects' responses on such things as regrets, meeting and losing a spouse, a first pair of shoes and the secret of longevity (Kitty's answer? 'I never ate a vegetable in my life.' 113 year-old Kathleen jokes 'Prostitution.'). One man is the only living person to have met both Michael Collins and Eamon de Valera, leaders of Irish Independence. Another is the last living witness to Bloody Sunday's Croke Park Massacre. Many speak of the 'American Wake,' the family gatherings to send a loved one off to the U.S., often never to be seen again. Fegan uses elegant framing of various locales with static camera. One woman lives in the beautifully appointed, spacious living room of a large stone manse while an old man sits in a small room that looks like it hasn't changed since the day he was born. A shot of a subject riding a chair lift is lit to suggest ascension into heaven. Another catches an old woman engrossed in 'Fifty Shades Darker.' The film is a delight, but also an elegy to a lost way of life. Fegan saves a surprise for the end - two of his interviewees are sisters - try to guess which ones! Grade:

I am not sure what audience writer/director Fagan is aiming for with this charming, funny and poignant portrait of history. But, anyone who is interested in Irish history should see “Older than Ireland.” Heck, anyone interested in our modern history, period, should see this film. I happen to be very interested in the birthplace of my ancestors so the reminiscences of these centenarians struck a note within me. “What’s it like to be 100?” is asked of all and there responses are funny and very clear and coherent. One says, “I never ate a vegetable in my life!” as her answer for her longevity. They talk about key life events, like getting their first pair of shows, the joy of getting married and having children and the sadness and grief over losing loved ones, especially their spouse and children. They talk of the “American Wake,” the gathering of family and friends to see off those immigrating to the US. When asked what the most important inventions in their lives, the answers will surprise you. There is so much love for life in Fegan’s subjects that you cannot help but smile and enjoy their memories.