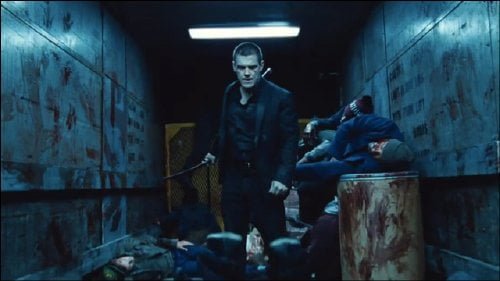 Joe Doucett (Josh Brolin) is a fast-tracked advertising executive who is inexplicably shanghaied an imprisoned in a motel room. The years pass, 20 of them, and, just as inexplicably, Joe is released from his prison cell. Now, he has to find the answer to the question – why was he imprisoned? – in “Oldboy" on Blu-ray.

Recalling the 2003 original of “Oldboy,” by Chan-Wook Park, I am struck by the shallow remake, helmed by Spike Lee, of what is a complex and disturbing character study. The new “Oldboy,” adapted by Mark Protosevich, is a shell of the manga-influenced Korean film. This “Oldboy” has the same problem as the original – the why of Joe’s decades long incarceration is delivered abruptly at the very end of the film. And, the reason for the imprisonment seems almost a whimsy by the puppeteer, Adrian (Sharlto Copley), as does the reason for Joe’s revenge plans. Production design (Sharon Seymour) and art direction (Peter Borck) are first rate – from Joe’s comfy prison to the garage ramps where Joe metes out punishment to his many attackers. Which brings me to ramp fight – why, when outnumbering a single opponent, do the bad guys always attack one by one instead of en masse? I shouted, in my mind, why the hell don’t you guys just rush the hero all at once and get it over with. (“Kill Bill Vol. 1” did not makes this common logic mistake with such action films by having members of the 88s attack the Bride all at once. And, she dispatches them all at once.) The original made the same action movie mistake as the remake. So, we have a mediocre remake being released on Blu-ray and the extras are better than the film itself. Included on the disc are an extensive “Making of…” feature, a transformation feature that shows Joe over the years in his prison, a tongue-in-cheek workout video of Joe getting buff in prison cell and the requisite talking heads interviews. The best of the extras, though, is the extended and alternate scenes feature. The garage ramp fight, in particular, gives us an extended look at the far too trimmed edit that is used in the film. The fight choreography and the one-take, fluid camera work make me wonder why it was cut down so much in the final edit. Other scenes, too, are better in their extended versions than what is in the final product.