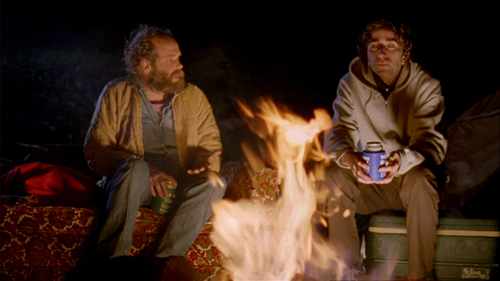 Two long time, long distance friends, Mark (Daniel London), and Kurt (Will Oldman), have been separated by time and life when Kurt invites his old buddy on an impromptu camping trip. Sophomore filmmaker Kelly Reichhardt takes us on a road journey that shows, sometimes, we grow with life’s experience in “Old Joy.”

When Mark (Daniel London, "Lisa Picard Is Famous," "Rent") is called by his old buddy Kurt (Will Oldham, "Junebug") to go on a weekend camping trip, Mark's heavily pregnant wife (Tanya Smith) isn't thrilled with the idea. But Mark jumps at the chance and is soon on the road with a friend he'd left behind. Theirs is a friendship of "Old Joy." Cowriter (with Jonathan Raymond)/editor/director Kelly Reichardt's ("River of Grass") film has been received by some as the second coming, but it is a far simpler thing. "Old Joy" is both a celebration of the verdant beauty of the Pacific Northwest and a requiem to male maturation. It is clear from the outset that Mark and Kurt are no longer on equal footing. 'Can we use your car?' Kurt asks, his own the type of heap owned by starving college kids. Mark maintains patient composure as Kurt smokes pot and proceeds to get them lost. After camping next to a dumping ground, the duo find a diner where Kurt tries to make the best of things as Mark takes calls from his wife in private and complains about how the trip is going. To Kurt's face, Mark expresses confidence in Kurt's abilities. Kurt spots the arrow nailed to a tree that marks the spot he's been telling Mark about, an arrow it would have been nigh on impossible to see the night before. The two hike into the woods as Lucy, Mark's happy go lucky dog, bounds all around them. Mark regales Kurt with stories of his good deed doing and Kurt expresses admiration and pride in Mark's community service. Mark offers a weak attempt at returning the compliment. But then something magical happens. The rustic wooden steam/soak house Kurt has been so eager to share with Mark appears like a Japanese tree house. Within this calming place, where all one can hear is the running of water and song of birds, the two genuinely commune. Kurt spins incredible stories out of mundane experiences as Mark floats and listens. The camera (cinematography by Peter Sillen, "Benjamin Smoke") lingers over Mark's incredibly symmetrical face, the curve of his eyebrows reflected in the bow of his upper lip. And then their time is over. A drive home is followed by an abrupt leave taking as Mark drops Kurt off at his apartment in a shabby part of town. Kurt wanders the city, bypassing a panhandler, then returning to give money, his own form of 'community service' that Mark tried and failed to imply. Reichardt's short film (less than eighty minutes) contrasts the tenseness of urban life with the restorative powers of nature, but her two old friends have so clearly grown apart at film's beginning, there's little to learn about this friendship. 'Sorrow is just but worn out joy,' Kurt says he was told in a dream, a clear indication of the state of their relationship. And yet, there's something about the mood of this film that grows on one. Much of the film's running time is spent observing the trip - from a car-mounted camera, from a car travelling behind - to meditative music by Yo La Tengo and while it may strike some as boring, it does have a cumulative build.

I am not sure what audience writer/director Fagan is aiming for with this charming, funny and poignant portrait of history. But, anyone who is interested in Irish history should see “Older than Ireland.” Heck, anyone interested in our modern history, period, should see this film. I happen to be very interested in the birthplace of my ancestors so the reminiscences of these centenarians struck a note within me. “What’s it like to be 100?” is asked of all and there responses are funny and very clear and coherent. One says, “I never ate a vegetable in my life!” as her answer for her longevity. They talk about key life events, like getting their first pair of shows, the joy of getting married and having children and the sadness and grief over losing loved ones, especially their spouse and children. They talk of the “American Wake,” the gathering of family and friends to see off those immigrating to the US. When asked what the most important inventions in their lives, the answers will surprise you. There is so much love for life in Fegan’s subjects that you cannot help but smile and enjoy their memories.