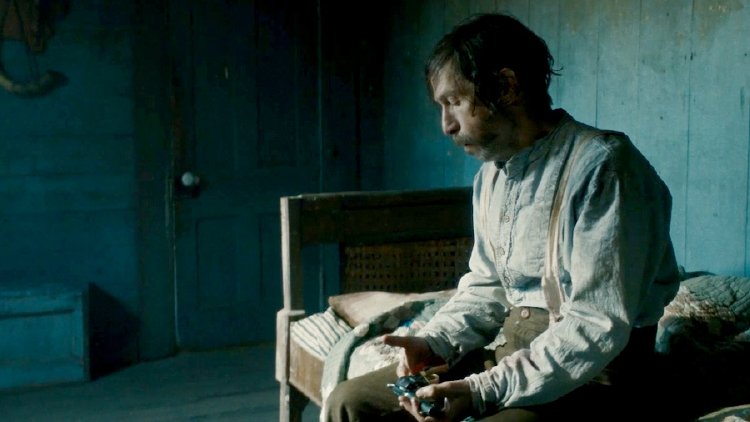 Three men on horseback, one wearing a sheriff’s badge, chase down a man, shooting and eventually hanging him.  They discuss a second man they need to find, but that man’s horse has sauntered up to a farmhouse, blood on its saddle, and the seriously injured Curry (Scott Haze, "Child of God") will be lucky to be found first by the farmer known as “Old Henry.”

If you’d told me the man behind a Country Music Television series starring Billy Ray Cyrus (‘Still the King’) had made a Western, I’d have been mighty dubious, but writer/director Potsy Ponciroli’s feature debut is so good I may have to check out that show!  Starring the Coen Brothers’ go-to hayseed Tim Blake Nelson ("The Ballad of Buster Scruggs"), “Old Henry” is a redemptive tale laced with the romance of the American Western outlaw.

We’re introduced to Henry working his land with his teenaged son Wyatt (Gavin Lewis, TV's 'Little Fires Everywhere'), who chafes against the labor intensive life of a farmer and his dad’s strictness and yearns to find his own path.  ‘Your Pa’s a good man, Wyatt,’ his Uncle Al (Trace Adkins, "The Lincoln Lawyer") tells him, ‘otherwise I wouldn’t have let him marry my sister.’  But Henry’s wife died years ago and the sober widow is wedded to his work.

Everything changes when Henry brings Curry home, tying him to the bedstead for the night before he can fetch the doctor to treat his gunshot wound the next day.  He’ll hide Curry’s satchel full of cash along with his gun, entrusting the man to Wyatt, but Wyatt’s curiosity is too strong.  Wyatt teaches himself how to use that gun against his father’s wishes.  He’ll also find something about Henry’s history the man wanted hidden.

Henry runs across that Sheriff, Ketchum (Stephen Dorff, "Somewhere"), where he found Curry, Ketchum’s tracker mighty impressed by whoever covered his tracks.  Unseen, Henry heads home without a doctor and tends to Curry’s gunshot wound himself.  His dilemma now will be who to believe – the man who claims that Ketchum is a bank robber wearing his badge or the man wearing the star who rides up with his armed men.

It is rewarding to see Blake Nelson given the chance to shine in a lead role tailor made for him.  His unshowy character is like the Navy Seal of homesteaders, his prodigious talents hinting at a mysterious past.  So, too, may his seriousness of purpose, something the actor conveys with a hint of regret, cognizant that his attempt to guide his son is driving him away.  Adkins acts as a good-natured intermediary.

Cinematographer John Matysiak (TV's 'Still the King') uses the pitch of the landscape to accentuate the drama, his interior set ups indicating power.  Everything about the production is impressive, from costume to sets and location, Jordan Lehning's score comprised of strings and propulsive drumbeats.  A third act gunfight is well choreographed, danger coming from unexpected directions.

“Old Henry” holds an ace up its sleeve and it’s a good one.  Poncilori’s Western is well worth catching.

Henry (Tim Blake Nelson) lost his wife and raises his son, Wyatt (Gavin Lewis), on his remote farm. When a riderless horse shows at on their door, he finds the rider shot and a bag full of cash, he knows that trouble is coming. When bad men, posing as sheriff’s deputies, arrive, they are in for a huge surprise when they find out there is more than meets the eye to “Old Henry.”

Tim Blake Nelson, as the title character, gives one of the best performances of his career as the taciturn farmer who just wants to be left alone to tend to his land and raise his teenage son. When the sheriff’s “posse” arrives, they meet the determined Henry holding a six-gun at his side – and he seems to be very comfortable with the weapon.

This begins a battle of both wits and skill as the bad guys lay siege to the McCarty homestead. Their lack of intelligence on the seemingly harmless sod buster will prove deadly as they try to flush out their quarry. There is much more to this modern look at a previous, rugged time and writer-director Potsy Ponciroli captures the look and feel with the grungy accuracy of a tough life.

I like the way that the western genre has changed and evolved since the early days of film. Back then big productions and mega-stars help bring about the classics like “Stagecoach (1939)” and “They Died with Their Boots On (1941).” Then, in the 1970’s, we had films like Robert Altman’s “McCabe & Mrs. Miller (1971)” and the “glamorous” westerns gave way to the gritty and realistic views of America’s old west. Happily, “Old Henry” is a part of that pantheon of the modern western.