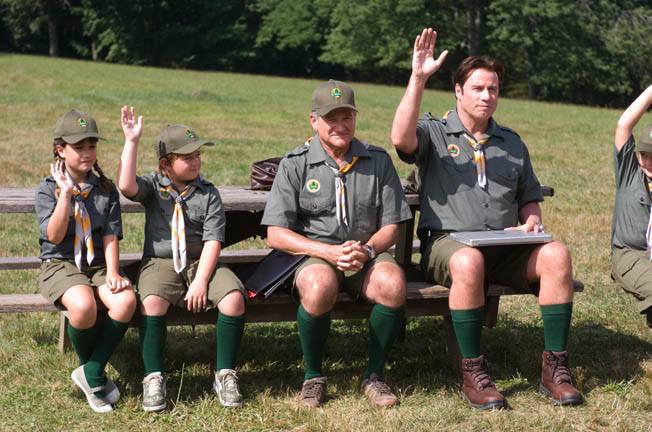 Friends for thirty years, Dan Rayburn (Robin Williams, "World's Greatest Dad") and Charlie Reed (John Travolta, "The Taking of Pelham 1 2 3") are on the brink of their biggest contract ever when child phobic Dan learns that the quickie Vegas wedding he annulled 8 years back produced twins Zach (Conner Rayburn, "The Invention of Lying") and Emily (Ella Bleu Travolta). When Dan is emotionally cornered into taking the kids for two weeks, he and Uncle Charlie need to prove that new tricks can be learned by "Old Dogs."

Supposedly held back from an April release due to Bernie Mac's death in August 2008(?), Walt Disney Studios has now succeeded in delivering a Thanksgiving turkey of gargantuan proportions. Reuniting "Wild Hogs'" director Walt Becker and star Travolta with the screenwriters of "Evolution," one of the unfunniest comedies of all time, doesn't sound like a good idea on paper and it flails around on screen, a morass of cliche, crotch shots and utter disregard for both logic and the audience. Walt Disney and poor Bernie Mac must be turning over in their graves. Ladies' man Charlie has been trying to get his more romantic partner into 'the life,' but Dan's still reminiscing about Vicki (Kelly Preston, "Battlefield Earth," "Death Sentence"), the woman he wed on the rebound on a trip to Vegas Charlie had planned to get him out of his divorce funk. Charlie likes to tell this story to potential customers, especially the bit about the 'free man' tattoo which ended up a permanent declaration of 'Fremont' on Dan's torso, and when he tells the Japanese via translator Amanda (Lori Loughlin, TV's "Full House"), she tells him she's never seen them laugh that hard. With two weeks of tricky negotiations ahead on the $47 million deal, however, unpaternal Dan is saddled with two 7 year-olds who can't even stay in the strictly singles pad Charlie pushed him into. Now swinging Charlie must become Uncle Charlie in order to help his best friend. "Old Dogs" is easily the worst film I've seen in years. It makes you feel the cynicism of the Hollywood machine when the filmmakers don't care enough about their audience's intelligence to stick to their own story or make anything funny. Charlie takes Dan for a spray tan for his date with Vicki and guess what happens! The two guys compare the side effects of their various pills and they get switched, not once, but twice! Of course, with writing this bad, of course these problems would only manifest themselves, and manifest themselves completely, after a switch. This film, which runs 88 minutes, feels like a much longer one that was eviscerated and stitched back together like Frankenstein. Jokes are set up and never paid off - Vicki's only handoff to Dan with her kids is the number to a poison center and a big deal is made out of the fact that Charlie has 1,000 year old poison tipped spears in his apartment and then - nothing!. Charlie finds himself in the center of a grief session, but when he loses his beloved pet (an aged dog left in a kennel when Charlie and Dan are purportedly leaving for Tokyo for *months*!), there's no connection between the two. Rita Wilson ("Auto Focus," "My Life in Ruins"), who is over fifty, has a small role as a hand model (!) and she plays the role cross-eyed? Dan picks up his wife from jail and tells her he has to leave, but when he is in Tokyo, he's undone by a video on his laptop showing him at an amusement park with ex-wife and kids, an outing which could not possibly have happened? On and on it goes, right through the fact that when the translator is no longer a love interest, the Japanese suddenly all speak English. Travolta is genial and has one weirdly entertaining computer generated gag, but he can't save this mess. Williams, having inherited his costar's real life family in Preston and her daughter, brings absolutely nothing new to the table and must follow through hitting the golf ball to the crotch not once, but twice. Seth Green ("Sex Drive") is a junior exec who thoroughly steeps himself in Japanese culture only to go AWOL when his dream comes true. An uncredited Justin Long ("Drag Me to Hell," "Funny People") plays a convincing psycho in a subplot which goes nowhere but provides more violence in lieu of humor. Also on board with no payoff are Matt Dillon ("Factotum," "You, Me and Dupree") as a scoutmaster and Ann-Margret ("Grumpy Old Men") as a grief councilor. Usually I give a half grade for technical competency, but "Old Dogs" just cannot be recommended on any level.