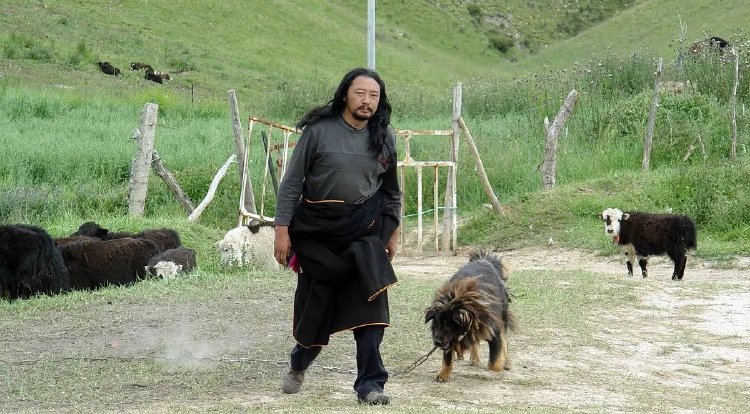 Out on the Himalayan Plains, Akhu herds his sheep with his faithful Tibetan nomad mastiff, but his middle-aged son Gonpo notes the breed is being stolen as it Is prized by wealthy Chinese.  Gonpo slowly rides his motorcycle into the local town with the dog and sells it without his father’s knowledge to Chinese trader Lao Du, his policeman cousin Dorje helping to broker a fair price for the “Old Dog.”

Tibetan writer/director Pema Tseden’s ("Jinpa") 2011 film appears very simple on the surface – a ne’er do well son sells his dad’s dog, dad buys it back then pushes his son to get he and his wife Rikso medical checkups to see why they haven’t had any children after three years of marriage.  But this film is an elegy for a way of life, Akhu mourning what the future is bringing as China becomes a Capitalist society.

After selling his father’s dog, Gonpo rambles about the town, delivering butter made on his farm, then getting drunk.  When Akhu awakens him the next day and learns what happened, he condemns Gonpo as a ‘shameless scoundrel’ and demands the cash (for a few agonizing seconds, we fear Gonpo has lost it).  Akhu rounds up Dorje and heads back to Lao Du’s, gets his dog back, then treats Dorje to lunch as they discuss just what’s been going on with these Tibetan mastiffs.  Akhu is continually advised that it may be best to sell the dog before it is stolen.

We then watch Gonpo head into town with Rikso after his dad questions their fertility problems.  As if we weren’t already disenchanted with Gonpo, who seems to spend his days watching TV, Gonpo refuses to accompany his wife into the hospital, claiming embarrassment over the subject.  He fetches her sister, Teacher Sampan, to go in with her.  Meanwhile, back on the farm, Akhu sits by the side of the road with his dog while his sheep graze and is approached not once, but twice, to sell his dog, the offers rising to seven times what Gonpo had sold it for.  There is an attempted theft of the dog and later Gonpo is jailed for assaulting Lao Du.

Tseden said he was depressed when he made this film and we can see it in his landscapes, the ‘modern’ town an ugly construct of cement slab buildings and dirt roads with no greenery to prettify the area, a contrast to the land Akhu usually inhabits.  One of his long takes consists of Akhu sitting in his doorway like a Buddha, the road into town winding over a hill in front of him, a reflection on the future.  The inability of his son and his wife to conceive is yet another indicator of a bleak future for the Tibetans.  The film is not without humor, as can be seen in a scene where one sheep is isolated on the wrong side of a fence and another when Gonpo borrows Akhu’s lighter in jail, but many will find the film’s ending deeply unsettling.  While it is a shock, Tseden is making a spiritual statement, one in which Akhu embraces his life with nature while rejecting the ugliness of the modern world.