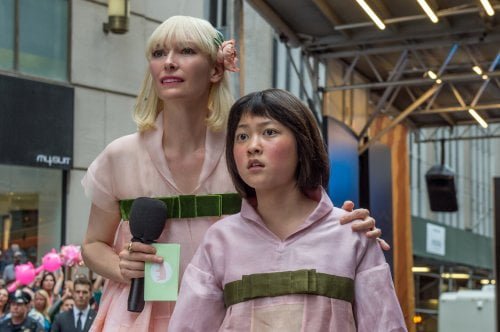 The multinational conglomerate Mirando Corp has the solution to global hunger: a naturally-bred super pig that will feed the world. The problem is it will take ten years before they can harvest their new “product.” They send 26 of the super piglets to farmers around the world to raise them for a decade. One ends up in rural South Korea and a young girl, Mija, has a friend for life with “Okja.”

Lucy Mirando (Tilda Swinton) has unveiled her new direction for the Mirando Corporation hoping to wipe out a history of atrocities under the leadership of her father and older sister. She claims the discovery of a super pig, one which has been naturally bred and nurtured by farmers in 26 different global locations, that will end world hunger while being environmentally safe. On a mountainside in South Korea, Mija (An Seo Hyun, 2010's "The Housemaid"), who lives with her grandfather Heebong (Byun Heebong, "The Host"), has grown up with one of them, unaware that her grandfather has been paid for her best friend "Okja." Cowriter (with Jon Ronson, "Frank")/director Bong Joon Ho's ("Memories of Murder," "Snowpiercer") latest was compared to "E.T." after its premiere at Cannes, but be warned, this is not a movie for children. Starting off as a cutesy family film, "Okja" will become an adventure, a wacky satire, torture porn and a message drama before climaxing in a horrific Holocaust metaphor. It's a masterful film, Joon Ho skating across genre and tone, his disparate elements spinning into a cohesive whole. The film encompasses many ideas - corporate malfeasance, our relationship to animals and nature, celebrity endorsement, animal rights activism - while still adhering to Joon Ho's themes of secrets and family betrayals. Mija lives a bucolic life exploring with Okja, the 13 foot long, 8 foot high, six ton animal that looks more like a floppy eared hippo than a pig. When Okja balks at following Mija into treacherous terrain, Mija insistence sends them both sliding down a rock cliff, Mija dangling by Okja's lead. Okja cannot get purchase, but spies a tree growing out of the cliff and pulls off an intelligently engineered, daring but sacrificial rescue, catapulting Mija back to solid ground as she falls into the forest. The battered but alive pig has saved Mija's life. The next day, Uncle Mundo (Yoon Je Moon, "Mother") struggles up the hill and is greeted warmly, but he's the first to arrive of a team there to 'check on' Okja, a team which includes Mirando spokesman Dr. Johnny Wilcox (Jake Gyllenhaal), the TV host of 'Magical Animals.' Heebong takes Mija to visit her parents' graves and presents her with a golden pig, but Mija learns it's a ruse and when she runs back to their home, Okja and the Mirando contingent are gone. The little girl defies her grandfather and leaves for Seoul to get her friend back before Okja's flown to New York City to be feted as the project's prize winning super pig. Up until now, we've been treated to fart and poop jokes (which Joon Ho will circle back to for an amusing payoff) and the sweetness of Mija and Okja's relationship, but the film morphs into an adventure as Mija breaks into Mirando's Seoul offices only to witness a ski-masked animal rights group take off with Okja. There is a thrilling car chase through Seoul which ends in a rampage in an underground shopping center which ends in with an Aesop allegory. When ALF leader Jay (Paul Dano, creating his own Wes Andersonesque subclimate) explains that his group's mission, to reveal Mirando's super pig treachery, will only succeed by allowing Okja to be shipped to New York, but that they will only proceed with her permission, his translator, K ('The Walking Dead's' Steven Yeun), lies about her answer. The group swap out Okja's monitoring drive with a camera and allow Mirando to take her. The film's third act is pretty rough going for animal lovers, Joon Ho making no bones about his message with a finish-to-start tour of a slaughterhouse that pulls no punches. It is remarkable, really, how Joon Ho paints the horrific reality of factory farming with creatures created with CGI and a puppet rig (visual effects supervisor Erik-Jan De Boer,"Life of Pi"). The production, which travelled from Seoul to New York to Vancouver, excels in every aspect, from production design to cinematography (Darius Khondji, "The Lost City of Z"), action choreography to editing. Costume designers Catherine George ("Paterson") and Choi Seyeon ("Mother") get a workout, spinning rural farm wear, corporate chic, and utilitarian activist garb, excelling with Wilcox's ridiculous safari getup and Mirando and Mija's matching pink designer hanbok parade costumes. The only place "Okja" stumbles, ever so slightly, is with a couple of the performances, Gyllenhaal's cartoonish performance jarring, Swinton's unoriginal, at least for her. An Seo Hyun capably grounds the film with her commitment and reactions to the horrors of the outside world. Dano stands out with gentle quirk, aghast when he learns of K's lie, contrite in rebonding with Mija. His band includes "Rules Don't Apply's" Lily Collins as the tough Red, Devon Bostick ("The Art of the Steal") as Silver, the environmentalist so extreme he considers food exploitation, and "The Snowtown Murders's" Daniel Henshall as the compassionate Blond. Shirley Henderson ("T2: Trainspotting") embodies the results-driven, overlooked administrator working for Mirando. Deliver yourself into the hands of the visionary Joon Ho and you will be rewarded with an unforgettable experience from a filmmaker working at his artistic peak. "Okja" isn't just entertainment, it's activism. Grade:

When I first learned about the story of a girl and her giant pig, my first reaction was “Really?” Then, I saw that director Bong Joon Ho is at the helm and I changed my mind. The filmmaker who made “The Host (2006),” ”Mother (2009)” and “Snowpiercer (2013)” is too savvy to make a simple story about the abovementioned girl and pig. “Okja” begins with the head of Mirando Corp, Lucy Mirando (Tilda Swinton) unveiling her plan to end world hunger. But, it is a world suspicious of GMOs and Lucy assures all that her super pig is all-natural with no growth hormones used. The company distributes the new piglets to far flung lands to nurture and grow – really grow! Okja has grown to enormous proportions – think a pig the size of a small elephant – but Mija treats her ward as her pet and Okja responds in kind. They have been inseparable companions for ten years and Mija thinks their idyllic life will go on forever. Then, a horde of Mirando Corp employees arrive at the remote farm, led by corporate shill, Dr. Johnnie (Jake Gyllenhaal), to take Okja to New York for the Best Super Pig Contest. They unceremoniously take their property away. Mija is devastated by her loss, but the stubborn girl, without a plan, sets off to bring her friend home. She gets the help of the Animal Liberation Front, led by Jay (Paul Dano) and K (Steven Yeun, in her quest. The unlikely gang of eco-terrorists provides a lot of humor but also helps uncover the evil deeds – and, boy, are they evil! – of Mirando Corp. Some might say that “Okja” is a mash up of moments from such films as “Lassie,” “King Kong,” “Mighty Joe Young,” “Soylent Green” and, even “E.T.” And, in a way, it is. But, in the hands of an eclectic helmer like Bong Joon Ho, we get a rousing, oft funny, oft very serious story of love, friendship and loyalty. The rescue plot covers familiar territory but the stars, Mija and Okja, make it unique and often wonderful. Okja, by the way, is great, both in character and believable CGI. While Mija and Okja are the heart and soul of the story, Bong does not stint on assembling an international cast to fill out what are often tiny parts. Tilda Swinton does double duty as sisters, one more evil than the other, who want to take over the world. The rest of this stellar cast include Gyllenhaal, Dano, Steven Yeun, Lily Collins Giancarlo Esposito and Shirley Henderson and all give good-natured performances. Be warned, the themes of “Okja” deal with very serious and graphic subject matter, like mistreating animals (and worse) and corporate corruption and greed bordering on the unconscionable. This makes it harsh material for young kids but its message will strike an emotional chord with everyone but the most jaded.