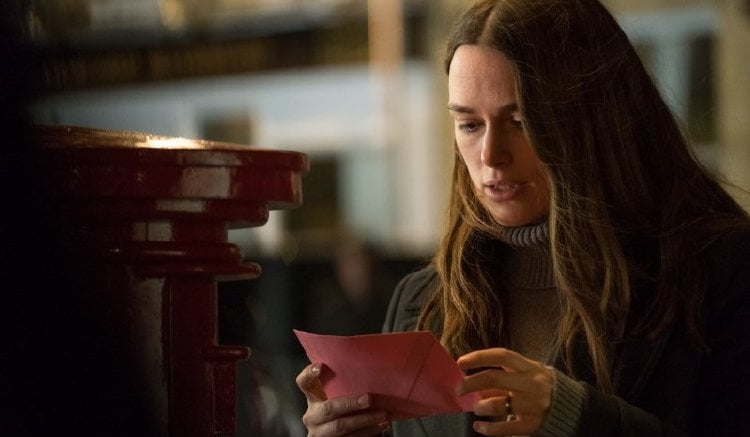 Just before the trigger was pulled and the Iraq War begun on 20 March 2003, British GCHQ analyst Katherine Gun (Keira Knightley) blew the whistle when she leaked a secret memorandum implicating the United States (George W. Bush) and British (Tony Blair) governments in an attempt to blackmail UN officials to join in the illegal war in “Official Secrets.”

Former English-as-a-second-language teacher Katharine Gun (Keira Knightley) didn't behave like a spy at her current job at England's Government Communications Headquarters (GCHQ) where she routinely flagged intelligence for rerouting. Then, in 2003, she saw a message come through from the NSA asking its ally to help collect dirt on United Nations Security Council members to ensure their vote to invade Iraq. Appalled by her PM's acquiescence and collusion with the Bush Administration, Gun leaked the email. The whistleblower's actions caused her to be charged with breaching the act called "Official Secrets."

Director Gavin Hood ("Tsotsi," "Eye in the Sky"), working with screenwriters Sara and Gregory Bernstein (adapting Thomas and Marcia Mitchell's 'The Spy Who Tried to Stop a War: Katharine Gun and the Secret Plot to Sanction the Iraq Invasion'), brings another tale of the lies and deception of the Bush administration to the screen, this time one little known to American audiences. This British perspective condemns its Prime Minister Tony Blair, of whom Gun notes 'just because you're Prime Minister doesn't mean you get to make up your own facts.'

But while the story itself is often riveting, Hood's execution is often bumpy, some aspects presently dryly, others too abruptly. Knightley isn't given enough room to create a fully fleshed character, her Katharine intensely serious from start to finish. The film's brightest note is Ralph Fiennes, who gives a puckish quality to his portrayal of human rights lawyer Ben Emmerson, the man who successfully defended Gun.

Katharine Gun was an unlikely whistleblower, an ordinary young woman who was moved to act when witnessing the chicanery involved in beginning a war she thought illegal. The most unusual thing about her may have been her husband, Yasar (Adam Bakri), a Muslim Turk, a fact seized upon by the British Government and used as a cudgel. After contacting a friend and anti-war activist to help get the memo into the right hands, Katharine sweats things out as we see the turmoil it causes the staff at the Observer, editor Roger Alton (Conleth Hill) terrified of publishing a fake document. When the story, researched and written by journalists Martin Bright (Matt Smith, "Mapplethorpe"), Peter Beaumont (Matthew Goode) and the outspoken Ed Vulliam (Rhys Ifans), is published, the boom is lowered at GCHQ, Katharine's supervisor Fiona Bygate (Monica Dolan) expressing that although she doesn't believe the leak came from within her department, all will be interviewed by internal security (Shaun Dooley). Katharine sends up a red flag immediately, calling in sick the day after her interview, yet she's still not suspected. When she sees a female coworker being grilled the next day, she marches in and confesses. Meanwhile the Observer's story is attacked, an administrator's use of spell check calling the memo into question when the American spelling of 'favorable' is replaced with the British. MSNBC cancels an interview with Bright, a nice detail indicting an overly cautious media.

Luckily for Katharine, the solicitor originally assigned to her case admits that espionage is not her expertise, referring the young woman to Ben. Ben and his team warn Katharine of the risks involved in not angling for a reduced sentence, especially as she has admitted to the crime, but something Katharine says gives Ben an idea and Elizabeth Wilmshurst (Tamsin Grieg), the Deputy Legal Adviser at the Foreign Office who resigned over her boss's decision to support the war, gives him the ammunition. Fiennes spars nicely with Jeremy Northram, the Director of Public Prosecutions initially, at least, a friend.

Hood mainly breaks his story into three arenas - that of Katharine's work and home life, the reporting at the Observer and the legal play of Katharine's defense team and Scotland Yard (who essentially tell her she cannot say much of anything to a lawyer without once again breaching the official secrets act). Katharine's husband Yasar is established as someone far less interested in politics than his wife, initially angered by her decision, then proud, fluctuations seemingly more the whim of a screenwriter than a character. A scene where Yasar is almost deported is resolved so easily it becomes meaningless.

There is a sameness to cinematographer Florian Hoffmeister's ("A Quiet Passion") widescreen compositions, his most impressive shot tracking Katharine as she ascends to the witness stand as if heading to the gallows. Paul Hepker and Mark Kilian's score forebodes from the second the NSA memo appears on Katharine's screen.

Director Gavin Hood’s “based on actual events” tale is one of government blackmail and cover-up that led to a decade+ plus war of death and destruction in Iraq – all because Bush, Dick Cheney and Donald Rumsfeld, with help from Prime Minister Blair, invented the existence of WMDs to justify their invasion of Iraq.

The telling of this true story is a straightforward, almost perfunctory, procedural as the case against Katherine is prosecuted by the government and defied by her legal counsel, led by advocate Ben Emmerson (Ralph Fiennes). The screenplay ticks through all of the elements of the case and points fingers at those responsible for what Katherine fought against – the illegal war in Iraq. The climactic court room finale ends with a head-scratching “huh?”

The filmmakers also take literary license with the core story by adding a tension-filled plot thread that has Katherine’s husband, Yasar (Adam Bakri), a Muslim, taken by “the authorities” and faces imminent deportation. This distracting episode, with Katherine frantically trying to secure his release, is not given any real purpose – except to add a tension-filled plot thread

I am not sure if I am pleased that this little-known conspiracy scandal (here in the US) is brought to light or disturbed and angered that the scandal even happened in the first place. I vote for the latter.