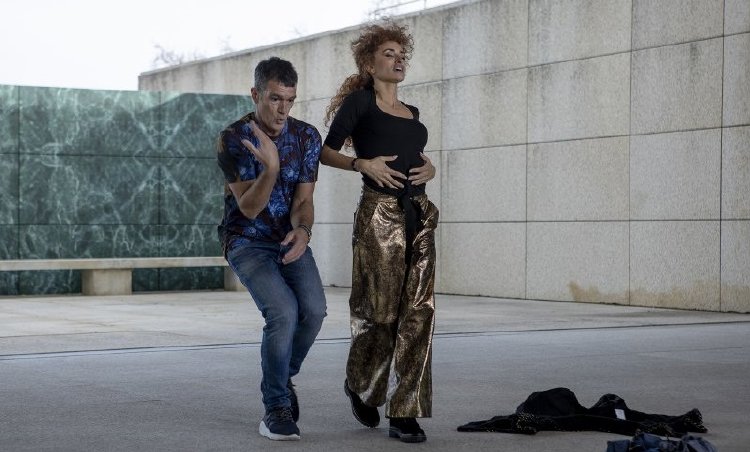 Surveying the tacky assortment of gifts he’s received for his 80th birthday, billionaire entrepreneur Don Humberto Suárez (José Luis Gómez, "The Skin I Live In") decides he needs an image overhaul and that the best way to go about it is to finance a prestigious film.  He buys the rights to a prize-winning novel and although he doesn’t quite know what to make of avant-garde lesbian Palme d’Or winner Lola Cuevas (Penélope Cruz), she wins him over pitching her ideas to adapt the book.  Then she makes a provocative move, casting heartthrob movie star Félix Rivero (Antonio Banderas) and highly respected theater actor Iván Torres (Oscar Martínez) as brothers, hoping to create tension, but their escalating egotism will turn their rehearsals into an “Official Competition.”

I haven’t laughed out loud so much in ages.  Whoever chose Penélope Cruz’s explosion of a frizzy, red wig deserves a trophy for that one contribution to this film alone.  Argentinean writer (with Andrés Duprat)/directors Mariano Cohn and Gastón Duprat ("4x4") skewer the filmmaking business with everything from clashing acting styles to duplicitous rehearsal exercises to the disdain shown for prizes and recognition from those who secretly yearn for them.  While Martínez plays the straight man, Cruz and Banderas have impish fun walking a line between dramedy and parody.

I challenge you not to giggle at your first sight of Cruz, whose immense comedy chops have never been given quite the platform that they have here (truth be told, I enjoyed this performance more than her highly regarded dramatic turn in “Parallel Mothers”).  We know Lola won’t be giving Don Humberto what he thinks he’s getting just by glancing at a few pages of her production notebook, filled with photographs of breasts, fabric samples and what appears to be someone’s shorn off ponytail.  But it is not until Lola sequesters Félix and Iván in a cavernous rehearsal space that the film really shifts into gear.

While Lola gradually infuriates Iván having him repeat the phrase ‘Good night’ until she’s satisfied it has expressed half of her plot, watch Banderas’ silent clowning as he sits alongside, his eyebrow rising in mockery of his costar as he fiddles with his pink framed glasses.  He’ll undergo her torturous process next, as she has him modulate drunkenness down from a level 10 to a 3, gradually bringing it back up to a 6.5.  The next thing they know, she insists they sit beneath a twenty foot wide boulder suspended from a crane in order to introduce tension into their scene reading.  The two actors begin to undermine each other, creating chaos with lies they later claim as acting exercises.  Iván uses Félix’s to drop an advantageous notion in his director’s ear, one which she clearly sees has merit, which will prove ironic when truth imitates fiction.

The film can seem overstuffed with such minor subplots as Lola’s ogling of actress Diana Suárez (Irene Escolar) as she performs a dance routine in private or Iván and his boho wife Violeta’s (Pilar Castro, "Julieta") awed analysis of ‘music’ that barely fits the descriptor.  But even some scenes which seem indulgent are just too funny to dismiss such as three set pieces indebted to Jacques Tati, magnifying, distorting and muffling sound to great comic effect or a hypnotic overhead shot of a metal shredder destroying various objects.

The fact that the movie Lola’s making is a banal and melodramatic riff on Bette Davis' "Dead Ringers" is made funnier when we see it shot on a soundstage reminiscent of Lars von Trier’s “Dogville.”  The film’s title is, of course, a double entendre, Cruz the epitome of art house pretension as she answers questions at the Cannes press conference for her entry in its official competition.  Cruz expresses volumes with a dismissive wave of her hand, every notion whirring through her head outwardly conveyed in a comic master class of a performance.

Billionaire Humberto (Jose Luis Gomez), on his 80th birthday, wants to leave behind a great legacy. He decides the best thing to do is to make a movie, a great movie, and hires the best of the business. This brings director Lola (Penelope Cruz) and actors Ivan (Oscar Martinez) and Felix (Antonio Banderas) together to create the rich man’s opus maximus in “Official Competition.”

Here we have an example of an irresistible force slamming against two immovable objects. Lola Cuervas is an award-winning director with her own style and temperament to get things done – her way. Felix Rivero is a self-proclaimed and Hollywood-based “method” actor who thinks he is a brilliant. Ivan Torres is an acting teacher and master actor who approaches his craft in a more academic manner – and does not think that Felix is brilliant. You can actually watch the tensions build in this movie in a movie.

Lola, dealing with her two prima Donnas, plays against their inflated egos and designs a series of rehearsal “exercises” to get them to bend to her considerable will. This leads to some bizarre techniques that she employs to bruise their egos and increase their unease – like rehearsing under a 5000-lb boulder suspended over their heads by a single cable. There is a considerable amount of satire and poking fun at the “geniuses” as the story and the movie they are making unfold.

We get a clash of creative personalities combined with the nuts and bolts telling of how-to-make-a-movie that ring real. Penelope Cruz, whom I have had a crush on since I first saw her in “Jamon, Jamon (1992), has really large hair here and it equals her large ego and personality. This makes her more than a match for the conflicting personalities of her stars. Much of the story has Lola making Felix and Ivan do her bidding though they want to do anything but. The clashes between (among?) these dynamic personalities are fun to watch