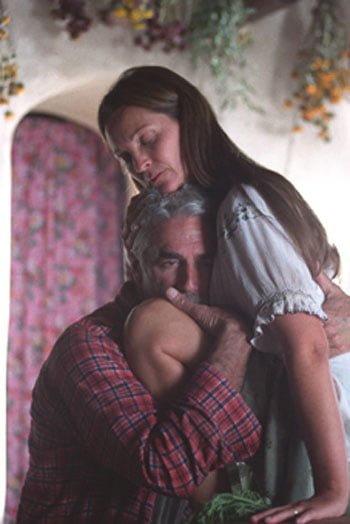 Bo Groden (Valentina de Angelis) lives a unique and quite unusual life with her family in the wilds outside of Taos, New Mexico. Her mom, Arlene (Joan Allen) is a true free-spirited earth mother who gardens naked, raises all of their food and is the glue that holds the family together. Dad (Sam Elliott) has always been a strong, self-reliant man but has recently taken to battle an inner demon of depression. When an IRA auditor (Jim True-Frost) comes to their farm and falls ill after a bee stings him, things get even more interesting in the Groden household in director Campbell Scott's "Off the Map."

The Groden family have been managing to live off the land and a $5K income for years in New Mexico, but dad Charley's (Sam Elliott, "Hulk") sudden and debilitating bout with depression is beginning to strain their ability to cope. Then a catalyst for all kinds of change appears in the most unlikely source of I.R.S. auditor William Gibbs (Jim True-Frost, HBO's "The Wire") who manages to locate their homestead so remote it's "Off the Map." The biggest mystery is why director Campbell Scott's ("Big Night") movie, which was making the festival rounds two years ago, has taken so long to be released. This beautifully restrained, slow moving film builds in emotional and visual power that is ultimately moving and spiritual. "Off the Map" may just inspire one to divest one's self of material possessions and move to a remote bit of wilderness. The story is begun as a recollection of the adult Bo Groden (Amy Brenneman, "Things You Can Tell Just by Looking at Her"), triggered by a Taos art show catalog, before her twelve year old self (Valentina de Angelis) takes over in 1974, 'the year my father was depressed.' Her yearning for something bigger in her life can be heard by the way she describes the furor over the reputed face of Jesus on a local diner's tortilla. Bo's a crack hunter with a bow and arrow, but she clearly misses her dad's companionship. Charley's best friend George (J.K. Simmons, "Spider-Man 2") is at a fretful loss. Mom Arlene (Joan Allen, "The Upside of Anger"), though, is a tower of strength always open to the love and humor in any given situation. This ultimate earth mother has such a profound effect on William Gibbs, who first observes her standing nude in her garden as she, in turn, observes a coyote on the hunt, that he never quite leaves the Grodens. The fledgling auditor lays down his briefcase, picks up a paintbrush, and creates a forty foot watercolor of the ocean's horizon for Bo's edification. Joan Ackermann adapted this for the screen from her own play and it is hard to imagine it on the stage. She and director Scott let us linger with each of these five central characters until we come to know them and watch how their interactions with each other change them. Although Bo has learned to hunt with her father, the blessing of a squirrel she's shot, thanking its spirit for providing nourishment, is clearly ingrained from mom, and Bo will use it later for more hurtful purposes. Bo has a modern sensibility all her own, though, precociously applying for a Mastercard and writing complaint letters to food companies in hopes of free samples. De Angelis makes a fine debut. Joan Allen adds another award worthy performance to her illustrious career as the natural beauty who seems to rise from the earth itself. She has the ability to be matter-of-fact and magical at the same time or turn exasperation with her husband into admiration epitomizing the strength of their marital bond. Elliott just looks like part of this landscape and his quiet performance emanates pain and frustration until he finally comes back as if he's never left. True-Frost has perhaps the oddest character to play, but he finds a way to convey falling under a spell - of both a place and the people who inhabit it. J.K. Simmons is so different from "Spider-Man's" newspaper editor I had trouble placing him. His George is a quiet, simple, dependable man whose presence isn't really felt until it's no longer there. Scott does a magnificent job juggling conflicting themes and emotions like ocean imagery in the desert and the practical need for money weighed against extravagant fancy. He sets a glorious time lapse scene of William observing the horizon all day into the sun's setting with "Mrs. Jones" and it's perfect. Cinematographer Juan Ruiz Anchía ("Spartan") never fetishizes the landscape, though, letting its natural, uneven beauty speak for itself. "Off the Map" has late, bittersweet revelations that make one marvel at the powerful emotions it has aroused with the momentum of its many small and simple moments. It is a unique film.

12-year old Bo is frustrated with her isolated life. Her parents have always lived off of the land, using their wits and talents to eke out an existence that most would call primitive. In the Groden home there is no telephone, no TV and no indoor toilet. There is no electricity, no plumbing save for a single hand pump and the only modern convenience is a beat up old pickup truck. But, Bo has an inquisitive nature, an active imagination and a home-taught education that allows her to grow and become her own person. She is also a crackerjack shot with a rifle, can handle a bow and arrow and supplies her family with bits of game to supplement Arlene's bountiful vegetables. Charley, Bo's father, the persona of Old West masculinity and strength has recently fallen victim to a constant bout of depression and anxiety and has, pretty much, stopped participating in the Groden family life. Arlene stoically and optimistically keeps things going and enlists the assistance of Charley's best friend George (J.K. Simmons), with his phone company provided health insurance, to go to a psychiatrist, feign depression and get some drugs for her stricken husband. Instead, George falls in love with his shrink and doesn't get the drugs. A handsome young stranger, William Gibbs of the IRA, arrives and is startled to see Arlene tending to her garden - totally starkers except for her straw sunbonnet. As he uncomfortably stammers why he is there - to perform an audit on the Grodens and find out why they have not filed their income tax statements for six years - a bee stings him. William has an immediate allergic reaction, swells up and passes out. He spends the next several days sleeping and hallucinating as Arlene treats him with her folk remedies. Slowly, he recovers but realizes that the life of an IRA agent is not for him. Charmed by the eccentric family, especially Arlene and the enchanting land, Gibbs realizes that he has a newly awakened talent for painting and drawing. The Grodens also learn that he has also been suffering from long-term depression and has drugs to treat it - a boon to Arlene. This unlikely combination of people brings us into an almost surrealistic world where there are few modern conveniences but it is an environment full of life and energy where the Grodens, quite literally, live off of the land. The tiny family is at an impasse when Charley succumbs to the power of an inexplicable depression that has him in tears much of the time. When Gibbs arrives he unknowingly opens a valve that allows the family to heal and in the process opens up his own potential as he explores his newfound artistic talent. At the same time, intelligent Bo takes interest in William's fancy briefcase and wallet and is scheming to get a credit card of her very own. She also desperately wants to go to public school. The tiny cast of characters focuses on little Bo as the story's anchor. Newcomer Valentina de Angelis is remarkably cool and comfortable, opposite the veteran adult players, in her first feature film. The youngster learned how to shoot a rifle, tie a squirrel and use a bow and arrow and holds the screen like a pro as she performs her imaginary twilight three-ring circus or goes on the hunt to gather meat for the family pot. Joan Allen plays a very different role than her norm and is superb in her earth mother character. Tanned and fit, the talented actress seems ageless and creates a character with a timeless quality who could survive anything, and thrive. There is a palpable feeling of comfort in Arlene and it is easy to see why William Gibbs would fall in love with her. Sam Elliott, also cast in a role counter to his usual gruff, tough guy, is given the chance to explore a character who is normally in total control but has lost touch with reality and does not know why. Though nearly silent for the film's first two reels, Elliott evokes sympathy for his suffering and you root for him to get better throughout the film. Jim True-Frost, as William, gets the chance to put the biggest arc on his character's development and change as he goes from an insecure young man who believes that he, when 6-years old, had discovered his mother's hanged body, to a freed man whose mind and spirit were unleash by his experience living with the Grodens. J.K. Simmons, as George, comes across, initially, as slow-witted but soon shows us that taciturnity is not necessarily stupidity and proves to be a reliable friend to the Grodens and like an uncle to Bo. When he leaves to get married and relocate away from his friends you can feel their loss. Helmer/producer Campbell Scott has spent years in trying to get Joan Ackermann's long-running play of the same name to the big screen. He brought on board the playwright to adapt her own work and assembled his small, talented cast and crew, finally, to bring us "Off the Map." Shot on location near Taos, New Mexico, the film's gorgeous locale is masterfully captured by Spanish lenser Juan Ruiz Anchia. Chris Shriver's production design, in its rugged simplicity of the Groden home, gives a feeling of another time before the invention of electricity or the telephone. Costume, too, by Amy Westcott, also the feel of a different era when the West was still a frontier. Gary DeMichele's score blends well with the look and feel of "Off the Map." The production of "Off the Map" opens up the theatricality of the play with the beautiful vastness of northern New Mexico. Scott does a sound job in marshalling his intrepid cast and crew to tell the story of a very different kind of American family.