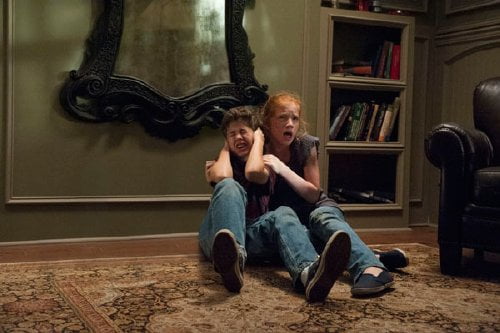 Kaylie Russell (Karen Gillan, TV's 'Dr. Who') is convinced that her parents' violent deaths 10 years earlier were caused by the family's antique mirror while her brother Tim (Brenton Thwaites, TV's 'Home and Away') holds onto the rational explanations force fed him all these years in a mental hospital. When Kaylie locates the Lasser Mirror via her fiance's auction house, she demands her just released brother uphold his promise to help her kill 'it.' Back at the old homestead, Kaylie thinks she's set up everything to outsmart the supernatural power, but she and her brother find their grip on reality tenuous after gazing through the "Oculus."

Cowriter (with Jeff Howard)/editor/director Mike Flanagan's 2005 short of the same name was a huge hit on the festival circuit, winning many awards. I haven't seen the original, but the adaptation is a nicely crafted film that's just not creepy enough. It's not the mirror and its inhabitant, Marisol (Kate Siegel), that gives chills but the flashbacks to the young Kaylie (Annalise Basso, "Bedtime Stories") and Tim (Garrett Ryan, "Insidious: Chapter 2") realizing that their parents are no longer themselves and have murderous intent. After an opening fakeout which hints at what happened but turns out to be Tim's therapy session, the two siblings reunite at the ages of 23 and 21. The first hurdle one must get over in "Oculus" is believing Kaylie would endanger her brother's fragile emotional state immediately after he gets out of the hospital and actress Gillan isn't up to the task (the young performers in the flashbacks are far more effective). She brings Tim back to 2705 Hawthorne Way and begins to speak into the camcorders she's set up in front of the Glass, relaying its history of 45 gruesome deaths since 1745. She's got timers set to remind them to eat and hydrate (one victim died of dehydration in a bathtub - this spirit has a wicked sense of humor), has fiance Michael Dumont (James Lafferty, TV's 'One Tree Hill') primed to check in on the hour (he doesn't know why), has set up a dog in a cage (the mirror always takes them), set plants around the house (their death should signal its presence), set timers on thermometers and, her pièce de résistance, set up a yacht anchor on a winch aimed at the mirror attached to a manual timer. Kaylie knows the mirror can mess with electricity and phone signals, but only a person can reset the device that could destroy it. If you're wondering why she doesn't just go ahead and smash the thing, it's because Kaylie's intent on clearing her father's name. Tim has an explanation for everything until they reenter the mirror room and find the plants dead and the cameras facing each other. As the day progresses, so does the story of what happened 10 years ago, beginning with the strange circumstances surrounding family dog Mason and the strange woman Kaylie spies in her dad's office. Katee Sackhoff (TV's 'Battlestar Galactica') is terrific as mom Marie, convinced her husband's having an affair, gradually becoming unhinged. Rory Cochrane's ("Argo," "Parkland") also quite convincing as the husband whose paternal behavior ebbs as he takes firmer and firmer control of the household. Basso convinces as a terrified child with enough resourcefulness to try and get help, but who ever believes a kid over the parent, especially when the voice at the other end of the phone might not be a living human. It's the film's lead, Gillan, whose almost robotic line delivery takes a lot of the film's wind out of its sails. Flanagan does a nice job laying his tracks - the name Marisol means 'of the sea' and he features two sailboat paintings propped on a mantle - one in sunshine, the other in storm, light and dark mirror images. Mirrors, are, of course, frequent props, as is reflective material. Special effects are nicely done, the eyes of those 'taken' turned to silvered orbs and one reach from the mirror looking 3D (the movie isn't). The neatest trick Flanagan pulls off is how he cuts between the past and the present until the two timelines dovetail and overlap. But he also telegraphs one gross-out effect too insistently and a death by pottery shard fails to convince. If we want to learn the who and why of Marisol, it looks like we'll have to wait for the (inevitable) sequel. Truly great horror is a rarity. "Oculus" is well made, often clever, and just good enough to rate a pass.