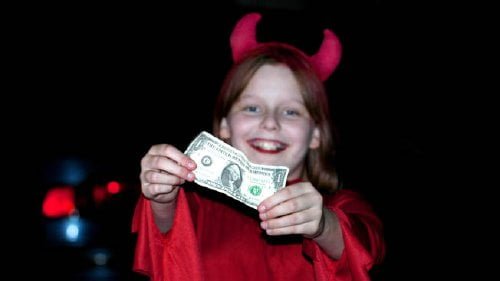 Over the course of a year, from one Halloween to the next, cowriter/directors Michael Palmieri and Donal Mosher recorded visits to the Mosher family whose three generations continue to try and cope amidst the burdens of memories of war, Wiccan curses, child molestation and more all set against the natural beauty of Ilion, New York in "October Country."

Donal Mosher joins the growing group of documentarians who have used their own family as a subject and garnered an Independent Spirit nomination for his film. But does "October Country" say anything different or bring anything new to the table? Yes and no. What Palmieri and Mosher have done that is quite effective is root the extended family distinctly in place and even in time, as reflected both by their film's title and the preponderance of autumnal landscapes on view. Mohawk Valley is a beautiful place, but, just like the Mosher family, it's been blighted by modern times. Here is a place where people gather to watch fireworks. At Walmart. The filmmakers begin their introductions with the family matriarch, Dottie, who informs us that 'family is everything.' Dottie is quite open about many things and the longer she talks the more she comes across as a blue collar philosopher. She understands a lot about what has happened in her family, but has been unable to break the cycle she's seen. She has even added to her burden by taking in Chris, a teenaged thief who brings her little but trouble. Dottie is married to Don, who she says went into the Vietnam War as a warm and gentle man, but returned cold and hard. Don doesn't say much until the latter parts of the film, but when he opens up he bares a scarred soul. The oddest member of the family is Don's sister Denise, a Wiccan who collects unicorns and dragons and keeps pet rats but does not have a job. Don has never forgiven her for the impassioned rant she made when he left for Vietnam and considers her useless to society. His refusal to talk to her when Dottie throws a family reunion is the film's most heartbreaking moment. But Denise is far from the scariest member of the family. That honor goes to Dottie's granddaughter Desiree, a little girl who knows way too much for her years. She's entertaining at first glance - 'Anybody want to dunk for candy corn?' she asks before smashing her face into her candy bowl - but one gradually gets the unsettling feeling that her preternatural precocity is masking a cry for help. In between these generations are Don and Dottie's daughters, who both have bad taste in men, men that have brought violence and abuse into their families. There is a chilling moment, on one of the family's beloved Halloweens, when we see Chris outfitted in drag and black eye makeup accompanied by one of his foster sister's men in a wifebeater shirt that states it is a wifebeater across the chest. The filmmakers have an unusual level of success in getting tightly into the action without the participants appearing to notice the camera. The filmmaking style is very natural, its observational moments organic within the family revelations. Donal Mosher's place within the family is never mentioned, nor is he ever heard. There is nothing dramatically out of the ordinary here - no big secrets a la "Capturing the Friedmans" - but the filmmakers do achieve an emotional build with this portrait of an American family who could live right next door. B Robin: Robin gives "October Country" a C+. Back To Current Show Back To 2010 IFF