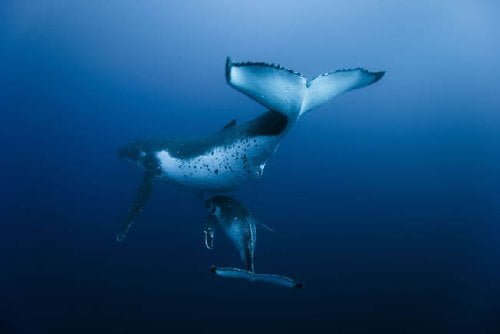 A group of young boys run up over a dune towards the sea with excitement. Our narrator, Pierce Brosnan ("Mamma Mia!," "The Greatest"), tells us that in order to understand them, we really need to spend time with and experience "Oceans."

This second DisneyNature Earth Day release is being touted as a way to raise money to save coral reefs. All very well and good, but where is the education? "Oceans," which credits a long line of funding, does have some beautiful imagery, but it is randomly put together, fails to identify about half the creatures we see, and features some often nonsensical narration. Furthermore, there is nothing about coral reefs in "Oceans!" Watch "Life" for free on TV and send the price of a theater ticket to the ocean conservation group of your choice instead. At first, the film involves with the sheer closeness of the camera operators and their subjects. We feel right on top of a marine iguana as it swims its way to the surface. Sea birds (who knows what kind as we're never told) shoot into the sea in the middle of nowhere like torpedos hoping to snag one of a huge, undulating school of fish and we get both a bird's eye and underwater view. Then one begins to notice how the music is manipulating our reaction to what we see on screen and that the reaction the filmmakers are going for doesn't necessarily match up with what is really happening. We're told thousands of spider crabs are advancing upon each other like soldiers - cue the marching music - but a quick Google tells us instead that this is an annual moulting event. Then repetitiveness begins to set in. If one sequence of a school of dolphins jumping through waves is good, three must be better. We see a lot of seals and sea lions because they're cute. Brosnan tells us we're about to see a 'ballet' of garden eels and razor fish and before it even starts, the editors jump to something else. "Under the Sea 3D" already did this, and, obviously, better. The harm humans are causing to ocean life are barely mentioned. We see a sea lion swim around a submerged shopping cart and some plastic floating in the water, but why no mention of the 'Great Pacific Ocean Garbage Patch?' You could learn more watching Ramin Bahrani's 'Plastic Bag' short, narrated by the marvelous Werner Herzog, for free on youtube. We see photos from outer space which highlight pollution entering the oceans, but are given no context. We see a huge fishing net where a turtle is caught and hear about trawling on the ocean floor but the devastation is glossed over. Upon learning that some species are facing extinction (who knew!), we're told that the ocean has always been able to 'fight back.' And so the fact that boats are tossed in raging seas and lighthouses and piers are battered by waves makes everything OK. Was the writing this ridiculous in French or did someone translate while imbibing? There are some beautiful sights, granted. I'd never heard of a blanket octopus before and it is a marvelous creature, just as the ones Brosnan calls 'aliens' are although that's all the explanation we're given. A mantis shrimp picks a big fight with a crab and surprisingly wins. A giant starfish moves about aided by suctioned tubers extending from its arms. An Asian sheepshead wrasse looks like the Elephant Man of the sea. But these moments are too few. We're told that many animals travel and see great footage of humpback whales but learn nothing of their migration. We hear about 'tools' being used and then that subject trails off. A diver swims along with a shark twice his size and Brosnan manages not to laugh while saying 'the most gruesome face may be hiding a smile.' Or maybe he just isn't hungry right now. Perhaps codirectors Jacques Perrin and Jacques Cluzaud were named after Jacques Cousteau, but they aren't in his league. After ninety minutes of rambling, all they can conclude with is that maybe we shouldn't be asking about the oceans but about ourselves. How profound.