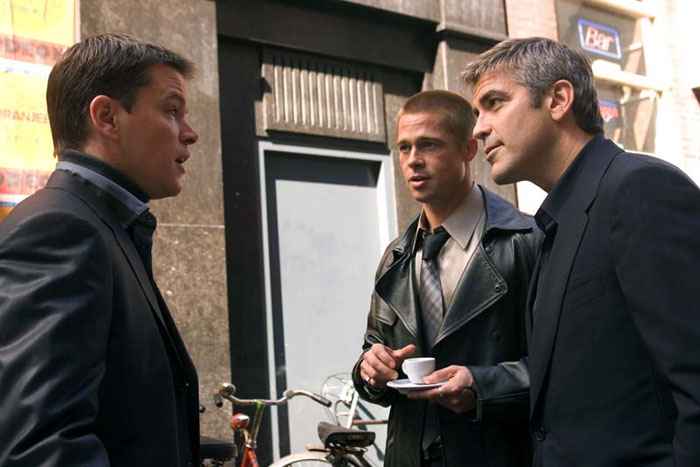 Three years after their successful Vegas heist, their mark, Terry Benedict (a dandified Andy Garcia, complete with cravat and silver topped cane), has tracked down each of Danny Ocean's (George Clooney) eleven man team and he wants his money back - with interest - or else. With two weeks ticking down, the crew reassembles and heads to Europe (where they're less likely to be known) to pull off some jobs. But Rusty (Brad Pitt) has a secret that Danny doesn't know about and Terry didn't tell them he had a partner, the world's most successful currently active thief, two factors waiting to trip up "Ocean's Twelve."

Steven Soderbergh has now used up the good will he generated a few years back and it is time for him to start working his creative muscles again. "Ocean's Twelve" is an insult. It's like making moviegoers pay for someone else's overseas frat party. Its only saving grace is that the party is one that we wish we had been invited to. There are a number of vicarious giggles to be had and stunning locations to gawk at and it's obvious this immensely humorous and likable cast were having themselves a very good time indeed, but screenwriter George Nolfi makes no attempt to build the machinery of a good caper flick and Soderbergh doesn't bother to structure his two 'payoff' gags into his own framework. The film begins with a flashback to three years before in Rome where we learn Rusty's secret. He wooed and won Isabel Lahiri (Catherine Zeta-Jones), a Europol agent he ditches out on when she gets too close to nabbing him for a high profile theft. A second flashback to three weeks ago finds Danny Ocean domesticated by wife Tess (Julia Roberts) in a Connecticut colonial until she gives the danger code - 'There's water in the basement and the pilot light is out' - Benedict has delivered his ultimatum with a personal visit. We're reminded of the eleven thieves' character traits as we witness Benedict's visits to each and hear them give status reports on their financial situations to Danny when the group meets. With each owing 19.7 million to save their collective hides, eccentric businessman Rueben Tishkoff (a funny Elliot Gould) is the only one ahead having played the stock market while Rusty is actually in the hole for $6 mil having mismanaged a hotel empire. They all fly off to Amsterdam where Danny and Rusty orchestrate their first job via local contact Matsui (Robbie Coltrane, "Harry Potter's" Hagrid) at a meeting that is the film's hilarious high point as all three are in cahoots to pull a practical joke on Linus (Matt Damon), the rookie who aspires to be one of the team's management. But Matsui is also in cahoots with Benedict, and sets them up into a game of one-upmanship with The Night Fox. Right here, the shoddy screenwriting becomes apparent, as Danny identifies this guy, who Europol has been investigating for years, as Baron François Toulour (Vincent Cassel, "The Reckoning"), completely out of the blue. The few clever bits Nolfi and Soderbergh come up with - sending grease man Yen (Peking Acrobat Shaobo Qin) astray as missing luggage, causing a distractive commotion with a fight between Danny and Turk Malloy (Scott Caan) as Yankee and Red Sox fans, letting Linus decidedly not prove his mettle when eight of the eleven are jailed - are undone by their not having set up the Twelve's triumphs. The two big 'twist' wins simply arrive out of nowhere. The twelfth member of the team, Tess, is called in with such an atrociously self-aware gag the film never recovers. Clooney and Pitt retain the suave chemistry they had in the first film, and, along with Damon, they all display their good-natured ability to send themselves up. The rest of the eleven also reinvest their characters with their unique ticks and quirks, but Garcia spikes Benedict way too over the top and Julia Roberts looks like she's suffering from morning sickness (although she's okay in the role). Zeta-Jones adds the requisite glamour and Cassel adds the French accent and an in-joke recreation of Zeta-Jones' contortion act from "Entrapment." Other additions to the cast include the barely seen Jeroen Krabbé ("Ever After") as agoraphobic antiquities dealer van der Woude, Jared Harris ("Igby Goes Down") as Basher's London sound engineer, Eddie Izzard ("The Cat's Meow") as an inventor and Sir Anthony Hopkins and Cherry Jones ("The Village") as two of the film's 'surprises.' "Ocean's Twelve" provides some nice scenery in Amsterdam and Lake Como and all the entertainment value of its stars appearing as guests on a talk show. It is a comedy, albeit way too self aware a comedy, but a heist film it is not.