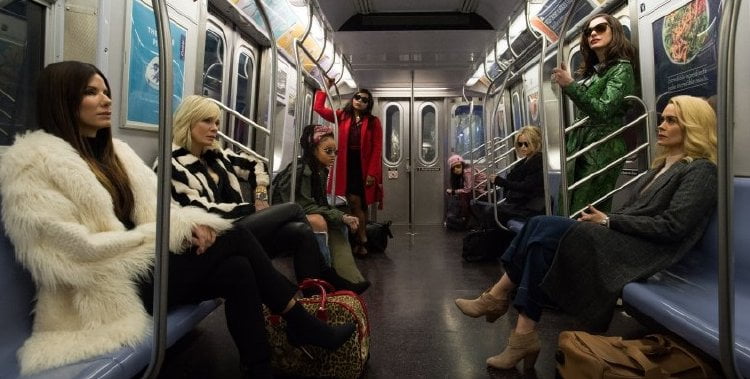 Like her now deceased brother before her, Debbie Ocean (Sandra Bullock) has spent a stint in jail dreaming up a heist that will take place during a hugely publicized event and features revenge as a bonus. But instead of a boxing match in Vegas, Debbie and her team will be attempting to steal the Toussaint, a six pound diamond necklace locked in an underground Cartier vault, during New York City's flashiest event of the year, the Met Gala, in "Ocean's 8."

Cowriter (with Olivia Milch)/director Gary Ross ("Seabiscuit") takes the reins from producer Steven Soderbergh and continues with a female twist that falls in line with Soderbergh's worst. It's a pleasant enough entertainment given its cast, Anne Hathaway stealing the show with her diva antics, but the heist itself isn't well plotted and hinges on a detail the filmmakers seem to have forgotten right after highlighting it as an obstacle. It's the type of film that casts three of its thieves as event workers only to turn around and have them walk the red carpet well after that carpet's presumably been rolled up, because, above all, this is about fashion. We get the usual group dynamics - mastermind Debbie, partner Lou (Cate Blanchett), hacker Nine Ball (Rihanna), sleight-of-hand con artist Constance (Awkwafina) and expert fence Tammy (Sarah Paulson), but this being a female gang, it also demands a fashion designer, Rose Weil (Helena Bonham Carter), and jewelry maker Amita (Mindy Kaling). Debbie's plot is one of those that leans on expected conclusions, so when they bait Gala Chair Daphne Kluger (Anne Hathaway) by getting invited celeb Penelope Stern (Dakota Fanning) lunching with has-been designer Weil on Page Six, of course she falls right into their trap. Weil, who's been corralled into the plot because of her $5 million IRS debt, then proposes Kluger wear the Toussaint to the Gala and of course Cartier cooperates, providing a security team for the $150 million dollar bauble. That Debbie could set up her duplicitous former partner, art gallery owner Claude Becker (Richard Armitage), as Kluger's date, is the most believable element of her scheme. Frankly, it's actually more fun watching Debbie leave prison for 'the simple life' dressed to kill in a black cutout sequined number and stiletto platforms with $45 and end up in a room at the Plaza burdened with Bergdorf bags than it is to watch the heist unfold. Bullock's one cool customer, her distraction techniques at the Gala, in which she's turned out in the film's most impressive gown, an Alberta Ferretti, allowing her to pull out her German, either with Heidi Klum or confused non-speakers. But although she looks fashion spread cool in biker mode, Blanchett isn't given much to do here. Paulson gets an amusing intro, one of the film's few laughs, as a harried housewife with a garage full of stolen goods, then merely walks around in navy Prada speaking into a headpiece. Awkwafina has some street snap, but Rihanna's a lot more interesting using more restraint. Kaling suffers much the same fate as Paulson while Bonham Carter mostly mugs, her Irish accent and Dolce & Gabbanna getup the most notable things about her performance. You may have noticed there are only seven thieves listed here. Suffice to say that some who appear to be on the outside just may be in, like security guy Paul Damanian (James Hindman) or insurance investigator John Frazier (James Corden). And is that the original Ocean's Chinese contortionist Yen (Shaobo Qin) flitting about the Met's laser security? (Elliott Gould's Reuben appears early to little consequence.) The film features Marlo Thomas, Dana Ivey, Mary Louise Wilson and Elizabeth Ashley as a quartet of senior fencers and more cameos than one can keep up with (Anna Wintour, Kim Kardashian West, Zac Posen, Waris Ahluwalia, Katie Holmes, Serena Williams...). "Ocean's 8" closes with each of its robbers heading into her own newly financed adventure. If they ever get back together, what's next - stealing a swag bag at the Oscars? Grade: