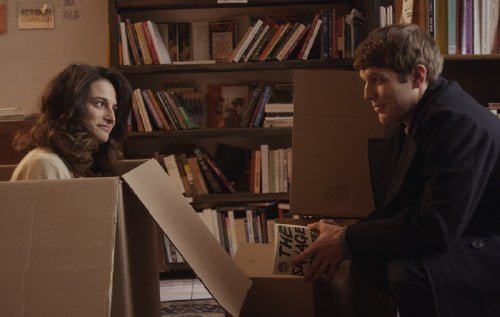 Donna Stern (SNL alum Jenny Slate) is a struggling NYC stand up comic who shares intimate observations about her own life, but with the book store which provides her reliable income about to close and a night spent with a stranger resulting in a pregnancy, Donna's having a tough time sharing with intimates in "Obvious Child."

It would almost seem like writer/director Gillian Robespierre had made a female response to Mike Birbiglia's 2012 "Sleepwalk with Me" if it wasn't based on her 2009 short - a marginal standup comic faces relationship issues along with a medical concern as he/she hones his/her act. But "Obvious Child" is less interested in portraying an insider's look at the dog eat dog world of stand up comedy than leading up to a most unusual romcom climax. If Donna's behavior getting there can be a little frustrating, Jenny Slate's engaging performance keeps us along for the ride. Donna's style of comedy is the personally revealing gross-out and after having been not only dumped, but immediately replaced, her dive back into the dating pool is more of a drunken hook-up. But the clean cut Max (Jake Lacy, TV's 'The Office') seems to respond to her brand of lunacy. When he shows up at her book store and finds her in a box, he's charmed, but his offer of a bite to eat is rebuffed. Three strikes and Donna tries to make amends by leaving Max a message to come to her show, where she promises to hang around unlike the last time. Two significant things have changed in the interim - she's scheduled an abortion for the pregnancy she's been unable to tell him about and discovered a coincidental link to her familial circle. They would include supportive puppeteer dad Jacob (Richard Kind, "A Serious Man"), divorced from more right brained business school professor mom Nancy (Polly Draper, TV's 'thirtysomething'). The former's all love, acceptance and 'pasketti,' the latter planning for the future which is exactly what's troubling Donna. Roommate/best friend Nellie (Gaby Hoffmann, "Crystal Fairy") is a rock, club buddy Joey (Gabe Liedman) her professional cheering section. The flailings of a twentysomething have been portrayed in countless films, but one of the pluses in this one is that Donna must work up to the two things she dreads the most. When she finally confides in her mom, the response she gets is wholly unexpected and while she deals with the second in a cringe-inducing way, it is nonetheless character driven. (When she uses an acquaintance, Sam (David Cross, TV's 'Arrested Development'), as a Max avoidance tactic, at least it blows up in her face.) Robespierre uses various New York City locations to define her characters, aided by costumer Evren Catlin, whose contrast of a pair of boat shoes with orange Crocs is a thoughtful, illustrative touch. Paul Simon's titular song fuels Donna and Max's all night montage while "Gone With the Wind" signifies commitment.