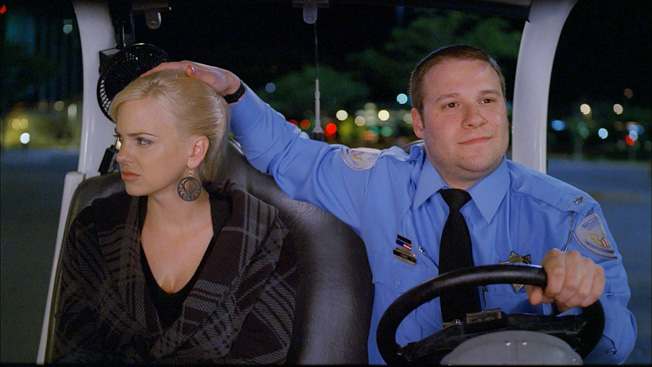 Ronnie Barnhardt (Seth Rogen, "Knocked Up," "Pineapple Express") is the head of security at the Forest Ridge Mall, but when Mall Manager Mark (Dan Bakkedahl) feels the need to call the cops in, Ronnie's pride takes a bruising. Ronnie finally admits he's always wanted to be a police officer to Toast A Bun counter girl Nell (Collette Wolfe, "The Foot Fist Way," "Semi-Pro"), but he's a bipolar rageoholic who flunks the psychological exam then goes ballistic in the very shopping center where he has trained his team to "Observe and Report."

In 2006, a little indie called "The Foot Fist Way" caught the attention of Hollywood funnymen like Will Ferrell and the Apatow crew. That film's star, Danny McBride, has been working ever since and now writer/director Jody Hill presents his first studio film. The sad truth is that a comedy out of North Carolina could be forgiven a lot, but this Hollywood backed effort starring Seth Rogen offers little in the way of improvement with a script that ignores its own character logic and development. Like "Foot Fist," "Observe and Report" is about grating, dysfunctional males and the sluts they love and inappropriate behavior alone does not equal comedy. And for those who might say I'm not the film's targeted audience, let me just state that I a) like subversive, b) like my comedy black and c) am not PC. This film is a major disappointment. Forest Ridge has a flasher frequenting its parking lot and Ronnie is determined to protect cosmetician Brandi (Anna Faris, "Brokeback Mountain," "The House Bunny"), 'the most beautiful girl in the world,' and rid his realm of 'the pervert.' When the cops are called in a second time over a sporting good store robbery, Ronnie's methods really get on Detective Harrison's (Ray Liotta, "Smokin' Aces," "Crossing Over") nerve. To prove himself, Ronnie applies to the local police academy. Harrison sets him up by ditching him in the worst part of town as part of a fictional 'ride along' requirement, and Ronnie proves his capacity for violence, taking down multiple drug dealers. His psychological profile dooms him and it's no wonder seeing as how he's been brought up by an alcoholic Mom (Celia Weston, "In the Bedroom," "Junebug") who slept with all his high school friends. If scenes of fine character actress Weston swearing and passing out will tickle your funny bone, this movie may be for you, but this is the type of film that invites us to laugh at those less fortunate. The girl of Ronnie's dreams is also an alcoholic slut (their 'lovemaking' occurs while she's passed out in her own vomit) and he thinks 'nice' girl Nell is weird because she's a 'born again virgin' who is taunted by her boss until she cries (because her foot is in a cast). Ronnie is looked up to by right-hand man Dennis (Michael Peña, "World Trade Center," "The Lucky Ones") and incompetent sharp shooter Asian twins John and Matt (twins John and Matt Yuan). New recruit Charles (Jesse Plemons, TV's "Friday Night Lights") doesn't know why he's there and neither do we (Plemons seems the only normal one of the bunch). When Dennis decides to show Ronnie the way one day, they spend it drinking, smoking weed, doing lines and, finally, shooting up before going out to beat the crap out of skateboarders - this after Ronnie's snapped for being offered crack by a kid earlier. Other bits of illogic - Ronnie makes homophobic putdowns to Brandi's gay counter partner Bruce (Alston Brown) while Dennis flames for him (which he doesn't seem to notice). Then Nell becomes a new girlfriend when she wasn't even good enough to offer him advice on a date with Brandi. The film's finale goes way over the top only to turn around and choose every conventional cliche in the book. There are a few things going for "Observe and Report." It isn't the typical dumbed down, pratfall kind of comedy but it isn't exactly a laugh riot either. There is one childishly amusing scene where Ronnie and Saddamn (Aziz Ansari, "I Love You Man"), a vendor he's convinced is a terrorist, engage in an extended bit on having that last word. The soundtrack is in your face - in a good way - to complement the 'in your face' brand of comedy that is merely uncontrolled irrational behavior. The film's climax may remind some of the infamous nude wrestling scene from "Borat," but Sasha Baron Cohen knows how to make it work ("The Foot Fist Way's" production designer Randy Gambill deserves some credit for gleeful exposure in the role of the pervert). Cinematographer Tim Orr ("George Washington," "Pineapple Express") frames some shots more like a hardcore action film than a comedy, providing a little edge, but Hill doesn't maintain a consistent tone. The film's all over the place. Hill even borrows a raffle car escape sequence from "Nobel Son," a film no one should be looking to for inspiration. It should also be noted that Seth Rogen's distinctive, charming laugh is nowhere to be found here. Last year we were blessed with not one, but two extraordinary comedies in "Tropic Thunder" and "Pineapple Express," both which featured McBride. "Observe and Report" is not more of the same, but in this instance, that's a bad thing.