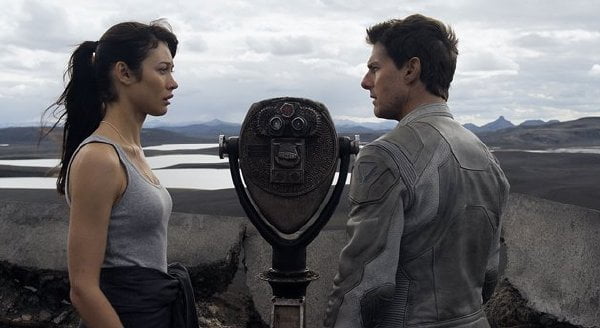 An alien race called the Scavengers had invaded Earth and mankind had to do battle or lose their world. We won the war but at the cost of a burned out cinder of a planet. Jack Harper (Tom Cruise) is a solitary drone repairman who roams the earth and fixes the broken units that are programmed to mop up the remaining Scavs in “Oblivion.”

Jack Harper (Tom Cruise) and his partner Victoria (Andrea Riseborough, "Disconnect") live on a 'tower' in a 2077 post-apocalyptic earth. Their mission is to repair and maintain the drones which continue to protect what remains of the planet's resources from the Scavs who lost the war but continue to plague TET, the immense space station preserving humankind. But Jack is haunted by dreams of another woman in 2017 New York City and when a space ship crash lands he disobeys orders from TET commander Sally (Melissa Leo, "Flight"), finds his dream woman in a sleep pod and rescues her from a drone which has already obliterated the rest of her crew. Drone tech 49 is risking "Oblivion." Director Joseph Kosinski ("TRON: Legacy") adapting his and Arvid Nelson's comic book with Karl Gajdusek ("Trespass") and Michael Arndt ("Little Miss Sunshine") has created a unique world, beautifully shot by "Life of Pi's" Oscar winning Claudio Miranda on location in Iceland and California. But by the very nature of Harper's mandated 'mind wipe,' Cruise comes off as a bit robotic and Kosinksi's story is such a mishmash of those that have come before, everything from "WALL*E" to "Star Wars" to "Total Recall" to "An Affair to Remember," that instead of becoming immersed in it, it becomes a game of spot the reference. Jack and Vika have a routine. He leaves every morning in his bubbleship off the helipad of their mountaintop living quarter while she (clad in a stylish shift and spike heels!) goes to a control room and checks in with Sally. Every day, Sally asks, with a deep Texas drawl, how things are ('another day in paradise' is always the reply) and if Jack and Vika are still 'an effective team.' Jack searches out downed drones, getting them back online with ingenuity and chewing gum, but he when he searches for one down a cave entrance, he falls into what was the NYC library. He grabs a book, but barely escapes from the scuttling swarm of red eyed Scavs within. He returns to his tower where he has dinner and a seductive swim with Vika, but the wildflowers he's found and nurtured to give to her turn her cold. Vika's all about regulations and doesn't want to rock the boat when they're so close to being taken off planet. She quickly tosses the 'possibly toxic' plant, a symbol of the old life Jack still yearns for. Later, when he returns with Julia (Olga Kurylenko, "To the Wonder") against Sally's orders, Vika's anxiety escalates along with her emotional insecurity. Jack's earlier assessment that the Scavs didn't appear to be trying to kill him so much as trap him proves correct when he meets their leader. Beech (Morgan Freeman) has been observing his unconventional behavior and has a plan to repurpose him. The highlights of "Oblivion" are the realizations of Earth after its devastation and the sci-fi trappings of Jack's current world. The bubbleship resembles a tri-orbital helicopter perched atop three legs which allow Jack 360 degree movement, making for some thrilling flight scenes. The drones are large white spheres with 'eyes' to identify friend vs. foe. The towers are a futuristic form of architecture, a two-tiered living space perched atop an angled beam as if they were shot into a mountain and then 'unfolded' like a fishing tackle box. Iceland looks more alien here than it did in "Prometheus," although some of the spatial references to the ruins of New York City appear much too wide spread. In addition to numerous sci-fi film influences, the filmmakers appear to have sprinkled their film with nods to Tom Cruise himself, from "Top Gun" Ray Bans to the New York Yankees cap the actor frequently sports. As in "Knight and Day," Cruise's character has a secret piece of paradise where he keeps found mementos and an old turntable powered to play Led Zeppelin's "Ramble On" and Procul Harem's "A Whiter Shade of Pale." Kosinksi has successfully created an environment worth exploring, but just like his debut film, his drama becomes inert once we've acclimatized ourselves to it. A sentimental, hopeful epilogue introduces a character who makes little sense, given what we've seen before. For a film with such imaginative visuals, "Oblivion" takes too long to make its point and will lose many to outright boredom. to boredom.

This is an ambitious sci-fi action flick by “Tron: Legacy” director Joseph Kosinski as he adapts his original comic book (with Arvid Nelson) for the big screen. The result is a two plus hour “epic” that lost my interest and much of my attention at the 80-minute mark. The story starts off simply enough with Jack on a search and repair mission for two downed drones. His handler, Victoria (Andrea Riseborough), is at their base station monitoring Jack and watching his back for any danger, especially Scavs. As he goes about his job, Jack has flashbacks to before the war as he has memories of him and a beautiful young woman on the observation deck of the Empire State Building. Are these memories real or just vague recollections of the past? We are kept guessing as the plot thickens and more characters enter the picture. Suffice it to say, the film has drones and clones and lots of fancy gadgets and explosions. A coherent and believable storyline, a bit less enthusiasm with the special effects and sleight-of-hand misdirection and/or some skillful editing would have made “Oblivion” a better film. Here is a case of less would be more. Tom Cruise is going through the motions as Jack Harper(s), mouthing the clichéd dialog and being the action figure he has become. Olga Kurylenko, I am convinced, is a better model than actress. She gives little dimension to her Julia character and is an object more than a subject. Andrea Riseborough as Vica, on the other hand, is a likable, intelligent character and the actress inhabits her well. Morgan Freeman makes a cameo appearance as the head of the “human resistance” that remains, fighting the Scavs, on Earth. This is a case, I think, of having Morgan Freeman for Morgan Freeman sake. The hyper-active special effects that abound will please the science fiction and comic book/graphic novel aficionados drawn to a Tom Cruise actioner set in the apocalyptic world of the future. It is just another save mankind film. It has its twists and turns but its ponderous length causes “Oblivion” to fall into….