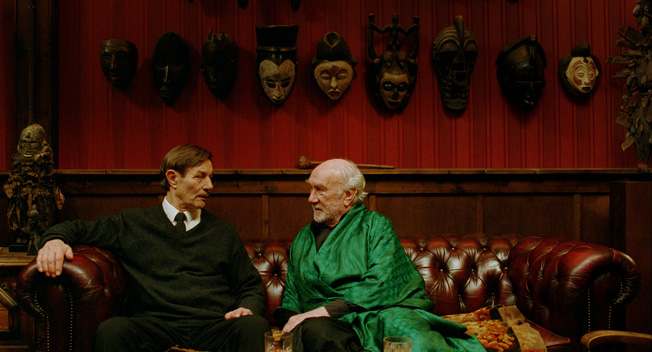 Odd Horten (Baard Owe) is on the verge of retiring from his decades long job as a train engineer on the Norwegian railroad system. His is a solitary life of routine as he travels across the country, spending his nights away from home in the small hotel of Svea (Henny Moan), a woman with whom he has developed a deep, abiding friendship over the many years. With his imminent retirement looming, the engineer must make life-altering choices as he transitions from his long life of work in “O’Horten.”

Norwegian train engineer Odd Horten (Bård Owe, "Zentropa," "The Kingdom I and II") is left adrift when he hits retirement age. He has spent decades living alone with his parakeet, visiting his mother, a former ski jumper, and avoiding the social gatherings of his coworkers. After his retirement party, he feels compelled to go to the home of one of them, but never makes it there. He never makes it to his train the next morning either and his experiences embolden him to embrace life more fully in "O'Horten." After a sojourn with Charles Bukowski in L.A. ("Factotum"), writer/director Bent Hamer ("Kitchen Stories") returns to his native Norway and conjures up the delightfully deadpan character study that became his country's submission for the Foreign Language Oscar. Despite one misstep and a telegraphed conclusion, "O'Horten" is an amusing peak into the Norwegian psyche. The film begins with mesmerizing traveling shots which are revealed to be Horten's point of view from the cabin of his high speed train. Cold, snowy landscapes are blotted out by the darkness of tunnels, only to whiten again as the train shushes through. Horten is a taciturn fellow who contentedly smokes his pipe and follows his routine. He stays at a bed and breakfast run by the interested Fru Thøgersen (Ghita Nørby, "Everlasting Moments") before captaining the train back home the next morning. Once he receives his 'silver locomotive' (which is choo-chooed in by his colleagues), he agrees to continue the party at a nearby apartment, but he cannot open the tricky lobby door and so decides to scale the scaffolding on the front of the building, guided by the laughter of his coworkers wafting down from above. An open window presents a shortcut, but a small boy who wants company to fall asleep holds him hostage (by threat of drum playing!). Horten falls asleep and doesn't waken until the next morning, when he must creep out of the apartment undetected. This sequence is brilliant in its comic construction, done with little dialogue and is followed by many more. Odd sits alone and sips his beer at Valkyrie Restaurant while high drama plays out with the chef. Odd finally decides to sell his boat, but instead has an adventure in the bowels of airport, well past security. Odd goes to replace a pipe and learns that the shopkeeper he has patronized for years has died. Odd hangs onto a post in an ice storm as a motorcycle slides down a hill sideways but a man with a salmon walks up with no problem. Odd finds Trygve Sissener (Espen Skjønberg) lying in the road and brings him to his home, full of exotic artifacts and antique skis, then joins the strange man for a blindfold drive, then ends up with his Molly, one of cinema's most distinctively lethargic dogs. An early visit to his mother, Vera (Kari Loland), reveals that the once daring ski jumper, a woman in a field that did not admit her sex, now suffers from Alzheimer's. The legacy of her daring informs Odd's new adventures and his run in with Trygve's father's skis takes him full circle (and a stunning use of Oslo's Olympic ski jump). A nude evening swim in a public pool ends up in a misadventure when a lesbian couple intrude on Horten's secret solitude forcing him to onto the street in a pair of women's red high-heeled boots, the film's only forced piece of humor. Hamer's pacing is also very deliberate, which mostly serves this quiet observational comedy but also almost begins to wear out its welcome. But only almost. Production design emphasizes the Norwegian winter and the dark coziness of its interiors. Sound and cinematography also complement the tone of the film and music written and performed by Kaada is a nifty blend of classical and garage band folk. "O'Horten" is as odd as its protagonist's first name, but it is a nice type of odd, the kind that keeps you smiling and for a solitary man, Bård Owe makes Horten very good company indeed.

Director-writer Bent Hamer reached international acclaim with his wonderfully quirky slice of Swedish/Norwegian angst in the post-war set “Kitchen Stories.” That film had fun with Sweden’s scientific efficiency of life that is world-renowned. He shifts from the whimsical to a more somber story (that still has its share of whimsy) that deals with aging, losing one’s sense of worth in doing a job and dealing with the twilight years. The simple but elegant story has more going for it than Odd’s facing the end of his career as a necessary cog in the machinery of life. With his retirement upon him, Horten sets out to tie up the loose ends of his long existence as he enters the non-working world of a retiree. But, this doesn’t mean that Odd is at odds with his new status. He experiences a series of life-affirming meetings with a variety of people and circumstances, including an ice storm that immobilizes the city. (This results in a very funny scene as Odd watches a well-dresses businessman nonchalantly sliding down the ice-slick street on his butt.) The eccentric people he meets along the way make this a clever, richly told slice of Norwegian life. Techs are superior, from John Christian Rosenlund’s crisp, lovingly lighted lensing – the engineer’s eye view as a train traverses the stark but beautiful Norwegian countryside makes for a great opening sequence – to music (John Erik Kaada) and production design (Karl Juliusson). Baard Owe plays Horten with quiet, soft-spoken assurance. Although the film has a meditative tone to it, “O’Horten” is anything but boring. You invest yourself in the central character and, when the story ends as you hoped with its positive and happy ending, it is with a satisfying sigh of contentment.