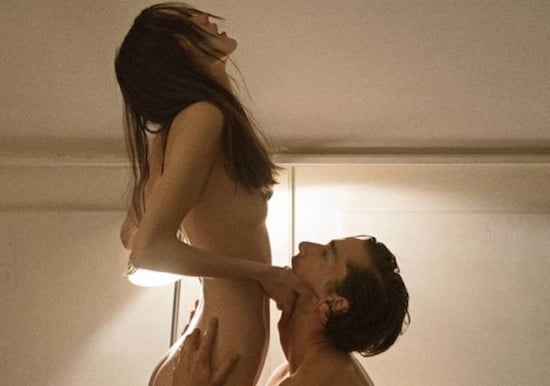 Seligman (Stellan Skarsgård, "Melancholia," "Thor: The Dark World") finds a beaten woman lying in an alley and when she refuses an ambulance, he brings her to his apartment. Joe (Charlotte Gainsbourg, "Antichrist," "Melancholia") tells Seligman she's a very bad person and when he encourages her to tell her story, she begins her tale of a "Nymphomaniac: Volume 1."

Leave it to provocateur writer/director Lars von Trier ("Breaking the Waves," "Antichrist") to wrap a philosophy on nature and science vs. love and religion in headline grabbing sensationalism. This, the 4 hour international theatrical cut of the film (over two parts), may not contain as much hardcore content as the 5.5 hour director's cut (to be released later), but it has enough. Anyone looking for sexual titillation should probably look elsewhere though as what's really fun about this film is how Seligman, whose nymph fishing lure is embedded in a wall, is able to equate all of Joe's 'bad' behavior to the nature of fish and the art of angling. The film is downright laugh out loud funny at times. Joe, who begins her story by noting that she discovered her genitals at the age of 2, is next seen with her friend Bea as a small girl flooding the bathroom to play 'frog,' an activity she clearly enjoys for the sensations she can provoke sliding across the slippery floor. She loved her scientific father (Christian Slater, "True Romance"), while calling her mother (Connie Nielsen, "Brothers") a 'cold bitch.' Explanations for the latter may arise in Volume 2, but dad invests a love of nature, particularly trees, the one thing he gets positively poetic about. Oddly, considering she believes her behavior reprehensible, she says her only sin is in demanding more colors from the sunset. When she decides she wants rid of her virginity, she visits a moped mechanic, Jerôme (Shia LaBeouf, "Transformers"), she has a crush on and he roughly grants her wish. Seligman notes that the 3 vaginal and 5 anal penetrations she endured adhere to the Fibonacci sequence. Further exploits, often with friend Bea (Sophie Kennedy Clark, "Philomena"), are equated to angling maneuvers (newcomer Staci Martin plays Joe in all of Volume 1's adult flashbacks). As the two continue to talk, such concepts as 'love equals lust plus jealousy' are introduced, especially when Joe continues to run into Jerome (in one instance recalling Steven Shainberg's S&M romance "Secretary") and finds herself 'in love.' Seligman is astounded by Joe's answer to his question about which hand's nails she cuts first, his measure of whether a person is light-hearted or serious. Von Trier and his actor succeed in making this seem like a revelation. Later, Joe's 'system' for weeding out lovers suggest chaos theory. Later still, music comes into play as Joe describes the rationale among keeping lovers F (Nicolas Bro, "War Horse"), G (Christian Gade Bjerrum) and the 'cantus firmus' that is Jerome. Von Trier, who assaults with Rammstein's 'Führe mich' at he opening and closing of his film, splits Volume 1 into five chapters and the film's bravura performance comes in Chapter 3 where Uma Thurman operatically plays the abandoned wife and mother of Joe's lover Mr. H (Hugo Speer, "The Interpreter"). She's a raw wound dressed in sarcasm, inviting her three young boys to 'visit the whoring bed' in Joe's apartment. That Joe could care less about Mr. H is one of the selfish acts she now regrets (amusingly, another, younger lover arrives during the histrionics, sitting meekly with a bouquet of flowers in Joe's kitchen). Chapter Four, depicting the nightmarish decline of Joe's father in a hospital, is filmed in black and white, perhaps to alleviate disgust when he soils himself to be momentarily freed from restraints. (Note costume designer Manon Rasmussen's ("Melancholia," "The Hunt") choices of fabric for Joe's shirts here, suggesting mathematical patterns embedded with hearts.) Von Trier also employs graphical overlays and split screens to demonstrate his philosophies. Throughout Volume 1, Seligman's kind acceptance cannot alleviate the undercurrent that we each travel through life alone, no matter how many we engage with. The first volume closes with a panicked Joe, seen having sex once again but horrified that she cannot feel anything. Consider this viewer hooked on that nymph.

An older man, Seligman (Stellan Skarsgard), walks from his home on the rain slick streets to a nearby shop. On his way back to his apartment, he notices a body lying on the wet ground in an alley. It is a woman, Joe (Charlotte Gainsbourg), badly beaten. He takes her to his home to help her to recover. As he cares for her, she tells him her story of how it is to live the life of a “Nymphomaniac (Vol. 1).” There has been a great deal of controversy over Lars Van Trier’s latest, a two part oeuvre (Vol. 2 will soon follow), and its explicit sex scenes. And, yes, there are explicit sex scenes but I have seen other films (“Blue Is the Warmest Color” or “Brown Bunny” for example) that go far beyond what Lars Van Trier does in “Nymphomaniac Vol. 1,” Maybe a director’s cut will take it over the top, graphic sex-wise, but the theatrically released version should not upset a mature audience knowing of the film’s explicitness. Question to those offended: why did you go to see a movie notorious for its graphic sex scenes if you do not want to see those scenes? I like the way Van Trier structures the story, flashing back and forth between the present and the past. My favorite moments in “Nymphomaniac” are when Gainsbourg and Skarsgard are on screen together. Their characters act as the film’s narrators, establishing Joe as a troubled woman obsessed by her sexual desires and plagued by them, too. She tells Seligman about her early youth where, even then, she began to feel her sexuality bubble to the surface. This brings us to the teenage Joe (newcomer Stacy Martin) who, with her friend, B (Sophie Kennedy Clark), boards trains (without buying a ticket) and competes to see who can have sex with the most men. Rather than being erotic, these interludes seem sad, almost desperate. There is no love involved and that is the point of Joe’s view on life. You may not like Lars Van Trier as a filmmaker but he does have an intriguing way in approaching his subjects. “Nymphomaniac Vol. 1” is an example of a mature filmmaker telling a story his way.