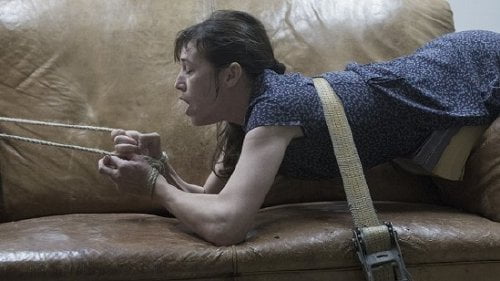 When we last saw Joe (Charlotte Gainsbourg), she was in a state of panic over her loss of sexual sensation. As she talks to Seligman (Stellan Skarsgård), we learn what apparently caused this and her increasingly desperate attempts to reattain it in "Nymph()maniac Vol. II."

So, after literally hooking us with his nymph lure in "Vol. I," writer/director Lars von Trier reveals his true colors and they're pretty dismal. "Vol. II" still has its allures (including an intriguing reference to "Antichrist") and even a few funny bits, but the intellectual debate has turned sour and von Trier has betrayed his two central characters with behavior that doesn't add up with what we've seen earlier. If you wanted to learn anything more about why Joe brushed off her mother as a 'cold bitch,' all we get is a generalization - apparently motherhood is responsible. After sharing her memory of a spontaneous orgasm combined with what she believed was a religious vision at the age of 12, Seligman suddenly turns judgmental, insisting that the women she saw must have been Valeria Messalina, the nymphomaniac wife of Roman Emperor Claudius, and the Whore of Babylon. Still declaring himself the ideal confessor because of his lack of sexual experience. 'I'm a virgin. I'm innocent.' Chapter 6, 'The Eastern and Western Church (The Silent Duck),' begins with Joe and Jerôme (Shia LaBeouf) now a couple, his earlier boorishness now replaced with a penchant for kinky sex games (complete with Udo Kier cameo!). But Joe's pregnancy and the birth of their son, Marcel (first glimpsed in a truly creepy reflection), change things between the couple, Jerôme recognizing that as he is no longer satisfying his wife, the 'tiger' must be 'fed.' Joe hires an interpreter to approach a black immigrant she sees on the street, desiring a tryst without verbal communication and gets more than she bargained for, while her use of the word 'Negro' leads to a debate on political correctness, Joe positing that removing words from language makes our world smaller. The ideas von Trier proffers here, including the 'honor' of inactive pedophilia, are disturbing (inconvenient truths or moral derangement?) and the introduction of shady sex 'therapist' K (Jamie Bell, far from "Billy Elliot") makes things turn darker still as Joe is 'cured' via sadism (notably, the most erotically shot scenes of both volumes). Von Trier tricks us with a sick joke, alluding to his controversial "Antichrist" opener, before barreling into the next chapter's feminist screed, insincere or misguided given the memoir in which it's placed. The last chapter, named for the Walther PPK shaped tea stain on Seligman's ceiling, really screws the pooch. Yes, von Trier goes exactly where you'd hoped he wouldn't, and we're not talking perverse sexual acts (which have already included the aforementioned silent duck as well as a stunt by the aptly named P (Mia Goth)). So what of the secret of great sex whispered to Joe by her friend B? A lie, apparently, as von Trier demolishes any hope in love and friendship. The filmmaker is contradictory throughout his opus, never more so than with his heroine's final act. And yet, while the whole of "Vol. II" may leave one infuriated, von Trier is still capable of cinematic seduction, never more so than with the simple pleasures of listening to Gainsbourg's patrician cadence as she and Skarsgård volley (her dismissal of Seligman's story of the Prusik knot brought a chortle). One feels von Trier's betrayed his actors, but again, he contradicts, closing with Gainsbourg's sensational cover of Jimi Hendrix's 'Hey Joe,' the capper to an obnoxious prank but a beautiful one nonetheless.