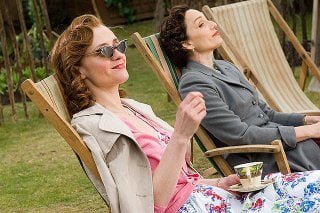 John Lennon (Aaron Johnson) is a spirited young lad growing up in mid-1950s Liverpool, England. He has lived with his Aunt Mimi (Kristen Scott Thomas) since he was five years old, after being abandoned by his mother. He is content with his life, always getting into the odd mischief, until his Uncle George (David Threlfall) collapses, dead. At the funeral a mysterious red-haired woman watches from afar and John recognizes her. It is his mum, Julia (Anne-Marie Duff). Life is about to change for the teen in “Nowhere Boy.”

Tyro director Sam Taylor-Wood takes an interesting premise – the mostly obscure younger years of the former Beatle – and makes it dull. I am hip to John Lennon’s early days. This comes from living with someone (Laura) who has been a Beatles fan since she was a kid. The real Lennon had a caustic wit and a great sense of humor that the reenactment fails to capture. This is due to casting Aaron Johnson as John Lennon. Engaged to director Sam Taylor-Wood, his part in this soft biopic lacks any of the edge and humor that exemplify Lennon. Johnson plays the bad boy without ever being bad and any character resemblance, like Lennon’s distinctive Liverpool twang, do not appear until the halfway mark and this is not done well. Kristin Scott Thomas is a true actor and she plays the tough role of Mimi, John’s beloved auntie who helped form the young Lennon when he needed her most, as an abandoned child. She is stern and loving and wants the best for the young man who has been a son to her. Thomas is riveting every minute she is on the screen. Anne-Marie Duff’s Julia (Mimi’s younger sister) is the opposite side of the coin. She likes to have fun and, when John learns she lives nearby, they begin a relationship that smacks of Oedipus Rex. Julia is married to a hard working man and they have two daughters but when John turns up he and Julia begin dating. This part of the story, with John and Julia acting like boyfriend and girlfriend, feels a little creepy to me. Both actresses, though, play their characters well. The filmmakers go through the usual pre-Beatles shtick with 15-year old Paul McCartney (Thomas Sangster) making a couple of brief appearances, and wowing John with his guitar skills, and, for about a minute, we are introduced to George Harrison (Sam Bell). The Cavern Club, where John and his band, The Quarrymen, played many gigs, is seen for a moment in an exterior shot. Unfortunately, one of the things lacking here is music. We do not hear a rock ‘n’ roll tune until 15 minutes in and The Quarrymen do not play a lick of real music until the 45 minute mark. For film about a man who is renown for his music, there is little of it here. At about a 95 minute run time, “Nowhere Boy” feels far longer, and this is not a good thing. I wonder what a real actor would have done with the role of John Lennon? Or, if another director took the reigns? We’ll never know.