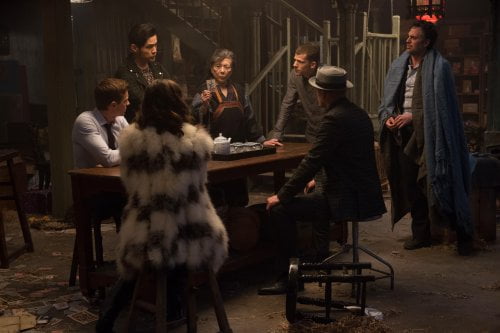 A year after going into hiding, the Four Horsemen reappear to expose tech magnate Owen Case (Ben Lamb, "Divergent"), but they're out maneuvered, Dylan Rhodes (Mark Ruffalo) is exposed and they're forced into a heist by Walter Mabry (Daniel Radcliffe), Case's former business partner, who's spirited them away to Macau with his own bit of trickiness in "Now You See Me 2."

Excruciating. That's how it felt to sit through the sequel to a film which wasn't good to begin with. This is a movie about magic that has none of its own. Written by "Now You See Me's" Ed Solomon with the directorial reins taken over by "Jem and the Holograms'" Jon M. Chu, "Now You See Me 2" is loud, long and lazy, the talents of its considerable cast wasted. Where are Penn and Teller when you need them? Those magicians entertain by tricking their audience, then explaining the mechanics behind the ruse, but in the world of the secret magician's society known as The Eye, we are supposed to just accept that Merritt McKinney (Woody Harrelson) can hypnotize someone and get them to do his bidding (at least until he can't) or that J. Daniel Atlas (Jesse Eisenberg) can reverse the fall of London rain. The big set piece inside a hermetically sealed computer room, where McKinney, Atlas, Jack Wilder (Dave Franco) and Lula (Lizzy Caplan, Showtime's 'Masters of Sex') conceal and pass a playing card all around the room, was purportedly done in camera by the actors, but their strain shows and Chu lets the 'action' run interminably. The tricks that do get explained, like that Macau travel warp, are boring when unveiled. There is one partial exception, and that's Lula's introduction. She surprises Atlas in his apartment, then guillotines herself. The former female Horseman Henley is quickly brushed aside, reportedly having become frustrated with Atlas's focus on The Eye rather than herself. But Lizzy Caplan's new character quickly grows tiresome, the actress allowed to overplay her hand. There's another new character, Chase McKinney, Merritt's twin also played by Harrelson, but the sibling rivalry flatlines. Eisenberg at least gave us a good performance the first time around - here his timing's often awkward as he picks up his franchise paycheck. Only Ruffalo and Sanaa Lathan ("The Perfect Guy"), playing his new F.B.I. boss Natalie Austin, have any weight, both projecting invested urgency. Morgan Freeman and Michael Caine are both back, the former in a role he could tackle in his sleep, the latter woken up to say his lines and sneer. Radcliffe's costuming is more interesting than his character. Other new cast members include Macau's Iong’s Magic Shop proprietors (Jay Chou, "The Interview" and Tsai Chin, "The Joy Luck Club") and Richard Laing ("Batman Begins") as Lionel Shrike in flashback. The film even ends just the way the first one did, a significant character revealed to be other than we thought. I couldn't care less. "Now You See Me 2's" greatest trick would be to disappear for good. Grade: