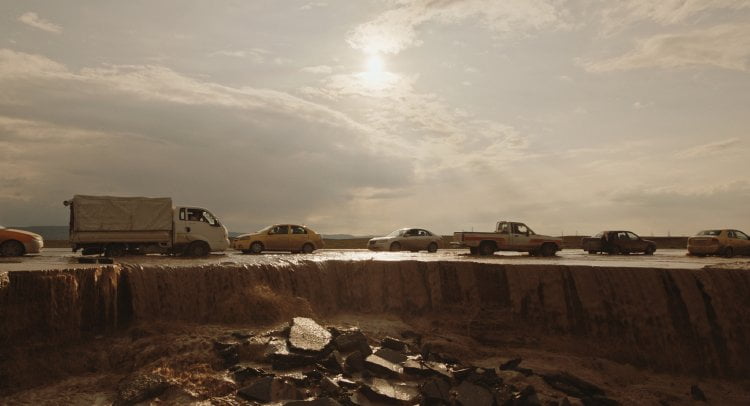 After examining the plight of refugees and their impact of their arrival on the inhabitants of an Italian island in "Fire at Sea," documentarian Gianfranco Rosi spent three years filming the aftermath of war, dictatorship and terrorism in Iraq, Kurdistan, Syria and Lebanon, finding a commonality in human resilience in “Notturno.”

Rosi clearly has an eye, his imagery here often starkly powerful or lyrically beautiful.  But his failure to put his imagery in context can make for a frustrating experience.  This was true even with his “Fire at Sea,” which had a much more focused narrative.  “Notturno” is a series of vignettes, some more engaging than others, some featuring stories Rosi returns to, others not.

Of the stories which continue throughout, there is a psychiatric hospital where we watch patients being given lines to memorize for a political play about their homeland, calling to mind that old chestnut about the ‘inmates running the asylum.’  We are shamed by their words that ‘the Americans ruined every beautiful thing.’  There are also two different pieces on hunters.  In the first, a man takes his canoe out among the reeds during magic hour as we hear gunfire and see pops of light in the far distance.  In the other we meet Ali, the eldest of seven children, whose mother shakes him awake before dawn to offer his services to the hunters traveling nearby.  We never see a man in the household, so are left to presume Ali’s $5 a day is the family’s sole source of income.

The two most powerful pieces feature adults dealing with the trauma of children.  In a classroom, a teacher goes one on one with her students, drawing out their horrific experiences with ISIS.  A young boy stands before a wall of their drawings, explaining how they depict decapitations and worse all witnessed by these kids.  In another, a mother lit only by the glow from her phone listens to messages smuggled out by a daughter held by the terrorist organization in Syria, a tear running down her cheek expressing her helplessness.

There are other situations which are more ambiguous.  A couple share a hookah before the man dresses in a white robe and goes out beating a drum and singing the praises of Mohammad.  We get a glimpse of a refugee camp in the rain, vehicles attempting to ford a flooded area, prisoners shuffling in from a yard, each placing his hands on the shoulders of the man in front of him.

In the press notes, Rossi notes that he originally intended to shoot everything at night, but changed his mind, leading us to wonder why his film is called ‘Night,’ despite many beautiful evening shots which seem to reflect peace.  What “Notturno” does do is remind us of the many horrors the people of the Middle East continue to face on a day to day basis while our news cycles have often moved on.