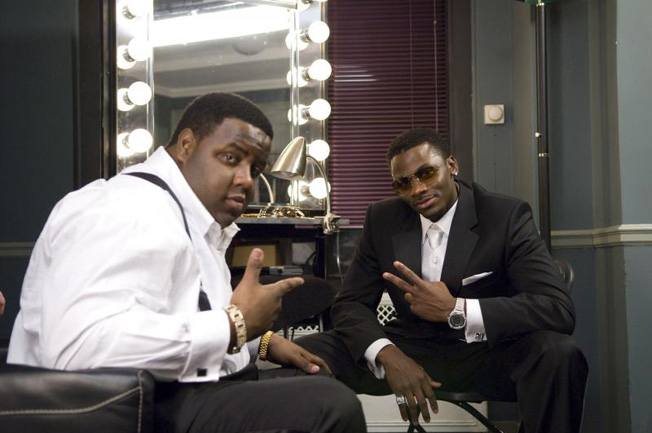 In mid-80's Brooklyn, Christopher Wallace (Biggie's son, Christopher Jordan Wallace) was the overweight kid of a protective single mother who never allowed him to go farther than their stoop. Four years later, unbeknownst to his mom, Christopher left school for the flashy allure and easy cash of street dealing. Only two years after that he was the East Coast's most famous hip hop artist, preceding his nickname, Big, with a word that would define him - "Notorious."

Screenwriters Reggie Rock Bythewood ("Get on the Bus," "Biker Boyz") and Cheo Hodari Coker follow the typical rise and fall biofilm outline, beginning with Biggie's unsolved murder after a Soul Train awards party, then flipping back in time via a stills montage to his childhood to retrace the path that found him there. That's all well and good, but in the interim, they and director George Tillman Jr. ("Soul Food," "Men of Honor") needed to find what made Biggie tick. Instead, they present us with a series of opposing behaviors with little in the way of explanation. 'Chrissy Pooh,' as mom Voletta (Angela Bassett, "Malcolm X," "Nothing But the Truth") called her son, much to his embarrassment, appears to be a good student but the streets prove stronger than his mother's will. Aspiring rapper Jamal Woolard takes over the role from Wallace's son and begins to show the genesis of Biggie's swagger in the schoolroom when he turns a teacher's taunt of becoming a garbage man back on the educator. He hooks up with best friend Damion 'D-Roc' Butler (Dennis L.A. White) to hustle drugs on the street, then finds out from girlfriend Jan (Julia Pace Mitchell) that she's pregnant (a garbage truck pointedly drives past the window at this announcement). Biggie steps up his street business to support his child, but mom discovers the truth (by throwing out his coke thinking it was mashed potatoes??!!) and throws him out. In the interim, a rap mix tape Biggie's made ends up in the hands of budding record producer Sean 'Puffy' Combs (Derek Luke, "Antwone Fisher," "Miracle at St. Anna"), who assures Biggie that he will be come a star. When Biggie and D-Roc are arrested, a gun discovered on Biggie's person, D-Roc takes the rap in order to let his friend make it to the big time. And make it Biggie does, bringing up other street artists like Lil Cease (Marc John Jefferies, "Stuart Little 2," "The Haunted Mansion") and Lil Kim (Naturi Naughton) with him in a protegé group, Junior M.A.F.I.A. Despite a romantic relationship with Kim, Biggie meets and almost immediately marries Bad Boy R&B act Faith Evans (Antonique Smith, "Across the Universe"), with whom he will have more children and a passionate but stormy relationship. He also becomes friendly with West Coast rapper Tupac Shakur (Anthony Mackie, "Million Dollar Baby," "Eagle Eye") only to have that relationship blow up in his face when Tupac, robbed and shot in the lobby of Bad Boy Records' building, tags the incident on Biggie and Puffy, beginning the infamous East Coast/West Coast hip hop wars. As presented by the filmmakers, Wallace was a jumble of contradictions which they do nothing to explain. How does a man brought up by a woman he obviously has the utmost respect for treat his own women so shabbily? How does the man who becomes a father at seventeen sell crack cocaine to a pregnant woman (Aunjanue Ellis)? Perhaps even more puzzling is trying to figure out what the appeal to women was in this grossly obese figure. Woolard may have the look and the sound down, but he never radiates the charisma that would explain the man's charm. Other casting is distracting. Luke looks nothing like Combs and unlike say, Frank Langella as Nixon, cannot make himself disappear into the character. Mackie has the even more unenviable position of trying to portray Tupac and he just isn't up to the task. Naughton is too soft for the streetwise Kim, but newcomer Smith does a fine job as Evans. Biggie's rise may have been fast, but it's so chaotically presented that it's difficult to get the lay of the land. The man who carried a gun, sold drugs to pregnant women and was abusive to his lover and his wife is a naif when it comes to the coastal wars, completely innocent, and seemingly becomes a changed man as the result of a car accident, wanting to make amends and turn into a good father, suddenly kind and wise at the ripe old age of twenty-four. Fans of Tupac will more than likely be outraged at the way he is represented here, if only in contrast to what the filmmakers of "Notorious" have seemingly sanctified. "Notorious" is an obvious homage to Biggie Smalls, but it fails to elucidate the man in any real way. They've just about turned him into the velvet teddy bear.