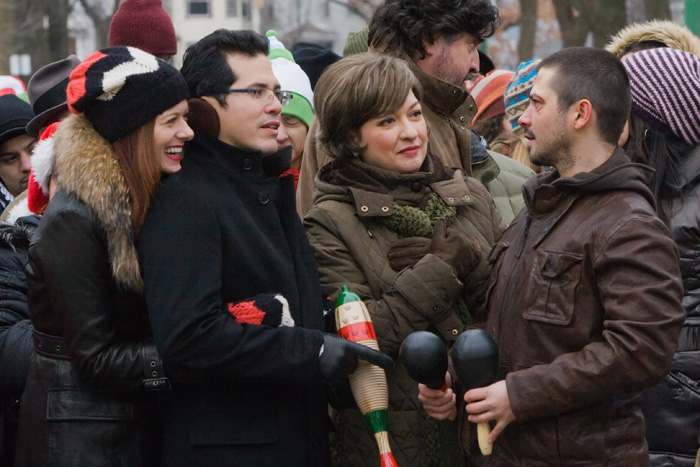 Mauricio Rodriguez (John Leguizamo, "The Happening") is caught between his mom Anna (Elizabeth Peña, "Jacob's Ladder") and his working wife Sarah (Debra Messing, "The Women") on the subject of grandchildren. Sister Roxanna's (Vanessa Ferlito, "Grindhouse") Hollywood career isn't as hot as she's led her family to think it is. Youngest brother Jesse (Freddy Rodríguez, "Grindhouse," "Bottle Shock") is safely back from the war and stunned to discover his ex-girlfriend Marissa (Melonie Diaz, "Hamlet 2") has set up household with another. When they gather in Chicago for Christmas, though, their problems are trumped when mom informs them she's leaving their dad Edy (Alfred Molina, "The Hoax") after thirty-six years, proving that there's "Nothing Like the Holidays."

An ethnic family in a big house, a parental divorce, a returning son, a family business called into dispute, a gun pulled, a successful sibling resented by the others, some time out for dancing and lots of food - it's beginning to sound a lot like "This Christmas," last year's pretty good holiday flick. But so what if screenwriters Alison Swan and Rick Najera follow a template - like the Black family of "This Christmas," the Latino family of "Nothing Like the Holidays" sport winning performances and the film seems an honest portrayal of a dysfunctional family Christmas gathering. I'd rather watching "Nothing Like the Holidays" every holiday season than ever watch "Four Christmases" again. The Rodriguez clan grew up in the Humboldt Park area of Chicago, where dad owns a successful bodega he hopes to pass on to Jesse. Edy is warm and gregarious with his customers, a bit flirtatious with the women, and this is where Mauricio and Sarah first stop on their way into town. Sarah's incensed to see that her mother-in-law regifted a blouse she gave her to Edy's cashier. Meanwhile, Edy's nephew Johnny (Luis Guzmán, "Fast Food Nation") and right hand man Ozzy (Jay Hernandez, "Lakeview Terrace") pick up Jesse, stopping for a snowy football game along the way. Roxanna arrives at the house pretending to have been dropped off by the limo her family expect of a Hollywood star. That night at dinner, which includes Marissa and her new live-in lover Fernando, Anna drops her bombshell and the family, with the exception of Sarah, all slink away with different reactions. Edy's been accused of cheating again and only Mauricio knew about the first episode. As Christmas Eve looms closer, Jesse tries to win back Marissa and deal with the buddy who died in his place in Iraq. Outsider Sarah tries to learn the Spanish songs Anne delights in singing for the Sarah keeping Edy's secret Christmas Parande, the Latin version of carolling which involves the whole neighborhood. She also learns - and keeps - Edy's secret. Roxanna gets updates from her agent regarding a role in a new television sitcom while denying her obvious attraction, reciprocated, from Ozzy. She thinks he's a 'thug,' as would be attested by his gang tattoo. Ozzy in turn is dealing with the release of his brother's murderer, who keeps crossing his path. Mauricio's been defending his wife's career choices, but is not happy to learn she may be accepting a job that requires heavy travel. Jesse sends his parents into a tailspin by announcing that he doesn't want to run the bodega and intends to return to Iraq. Throughout their time together is Edy's determination to make Anne happy by removing the old, bent tree which is blocking her upstairs view. Director Alfredo De Villa ("Washington Heights") paces his film well, giving all the strands equal weight, pulling each in at just the right moment. The film is surprisingly dramatic, dealing with many weighty issues, although the central parental conflict is the film's weakest link, a plot contrivance. De Villa sprinkles comic moments throughout, even making hoary underwear jokes work. His skill maintaining tone is best illustrated when Anne arrives home tipsy to find Father Torres called in as marriage councilor, comedy turning to heartbreak when Jesse follows his parents into the kitchen to make his announcement. The ensemble all do good work, led by the warmth and humor of Molina and Peña. Casting Luis Guzmán as a gay man is an interesting choice and while it takes some getting used to (why is Guzmán lisping?), the actor eventually settles into it. Leguizamo has a difficult role to play and has very little chemistry with Messing, but she is solid as the out-law trying to maintain her own yet fit in. Freddy Rodríguez and Jay Hernandez are both appealing as troubled men looking to find love. "Nothing Like the Holidays" isn't destined to become a holiday classic, but like "This Christmas," it is a sincere effort with a good cast that should please its demographic.