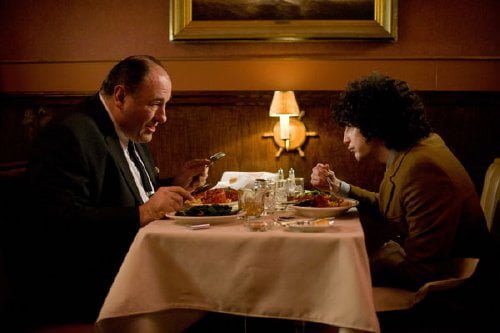 In the early 1960s, America’s shores were assaulted by the British music invasion, including such budding talents as The Rolling Stones and The Beatles. Douglas (John Magaro) and his buddies, inspired by these and other bands, see themselves as future rock ‘n’ roll stars and put together a musical group of their own. But, success and the ever-changing 1960s are a hard balance for the fledgling musicians in “Not Fade Away.”

With "Not Fade Away," 'The Sopranos'' David Chase may not have created anything original, but what he has given us is true. This coming of age story based in his own New Jersey environs will be very relatable to a large subset of boomers. Chase has also pulled together a terrific cast beginning with his star. John Magaro was the best thing in the recent "Liberal Arts." Here the Bob Dylan wannabe with real talent must contend with a best friend as he eclipses him (Jack Huston, HBO's 'Boardwalk Empire'), a girlfriend ("Dark Shadows'" Bella Heathcote) from a different social strata and a blue collar father who just wants him to cut his hair. Or see he thinks. Chase and Gandolfini have created a completely different New Jersey dad with Pat, a decent man with far more depth, wants and desires than his son has ever imagined. He's heart breaking here, especially as supported by Molly Price, a comic relief 'the sky is falling' housecoat and hair curlers mom whose entire nature changes when seen through Pat's eyes. Production design feels like your own memories and the music, of course, is great. The film's capped with an odd, slightly pretentious ending, but we're left with Pat's sad acceptance and his son's hopeful flight.

This is the feature film writing and directing debut by “Sopranos” creator David Chase and he goes for a period piece set in the age when R&B evolved into rock and roll and the Beatles and Rolling Stones hit America’s shores. Douglas (John Magaro) and his friends are blown away by the new music and, like many teens back in the 60s, they decide to form a band, The Twylight Zones. The story is about their trials and tribulations, not just getting a band going, but also of growing up and coming-of-age during those turbulent times. “Not Fade Away” is first, a character study of Douglas and his family, headed by patriarch, blue-collared Pat (James Gandolfini). The son is at that time in his young life when he rebels and questions authority and he and Pat butt heads constantly. This relationship between father and son rings very true, indeed, and reminded me of my own father and our arguments over Vietnam, civil rights and long hair at just about the same time as the film takes place. John Magaro is the center of “Not Fade Away” as Douglas and the actor gives a grounded performance. His naivety and thirst to enjoy life as a musician and becoming a star cloud his judgment. His combative relationship with his father also pushes him to rebellious actions not always in Douglas’s favor. “Sopranos” star (and terrific character actor) James Gandolfini is dead on as Pat, a man confused by the confusing times – Vietnam, race riots, free love, wild music – and he focuses his ire on his son. The father-son relationship is all too real and makes this a believable family drama, among other things, too. Supporting cast is distinctive and helps to give the film a dimension that could have easily been missed by a less talented cast. David Chase takes a page out of the Martin Scorsese playbook, music-wise, and utilizes a slew of great songs from the 50s and 60s. Things start out with the R&B-influenced Rolling Stones and the Beatle invasion as the musical catalyst and influence for the young people in the US. The songs of Bo Diddley, Buddy Holly, the Young Rascals, the aforementioned Stones and Beatles, Lead Belly, the Left Bank (“Don’t Walk Away Renee”), Small Faces (“Itchycoo Park”) and many more are included in the film’s chronology of music events and happenings during the 60s. Chase uses first-rate covers of great songs, too, and the young actors-musicians are credible in their renditions of now-classic tunes. “Not Fade Away” is a true nostalgic piece for me and others of my time, but younger audiences are going to be a harder sell. The frequent references to the “Twilight Zone” TV series add to the nostalgia.