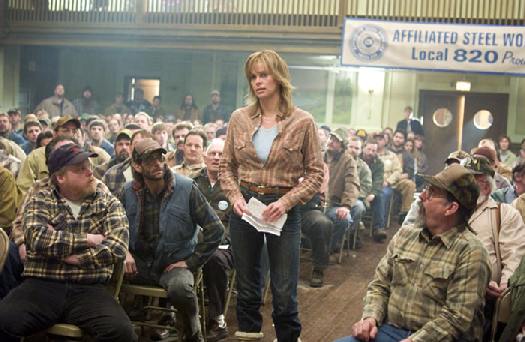 Josey Aimes (Charlize Theron, "Monster") is a single mom with two kids to feed so she turns to the hard life she grew up around, mining. Josey can endure the hard labor, but not the unfair treatment she receives because she is a woman. The strength she's built up over the years helps her stand her ground, even if she must stand alone, and take her employer to court where she will fight a landmark battle against sexual harassment in "North Country."

Before 1979 there were no women employed in the male-dominated iron ore mines of northern Minnesota. Ten years later, though women were finally employed as miners, the ratio was only 30 to 1, male to female. One such woman, Josie Aimes (Charleze Theron), took one of those precious jobs and soon learned the real meaning of sexual harassment in “North Country.” Josie has escaped an abuse-riddled marriage and moved, with her two children, into her parents’ home up north in iron country. She is prepared to endure the backbreaking labor and long hours that working in the mines requires but isn’t prepared for the hate and harassment by her male counterparts. She and the few other ladies working the mines must endure sexual advances, foul innuendo and physical abuse or leave. For Josie the job means that she can make a life for her and her kids. At first, she accepts the chauvinistic attitude and abuse by the male miners but things escalate and the attacks take on a hateful form. She seeks the help of the mining company owner to stop the harassment but is only offered the chance to waive giving two weeks notice and immediately terminate her job. She refuses the “offer” and returns to the mines but the hatred and slander has filtered down to her family, driving a wedge between Josie and her son, Sammy (Thomas Curtis). Finally, Josie has had enough of the sexual harassment, quits her job and hires a former local hockey star turned lawyer, Bill White (Woody Harrelson) to bring justice against the mining company. This begins the David versus Goliath portion of “North Country” as Bill struggles to bring a sexual harassment class action suit against the powerful company and its phalanx of attorneys led by a woman lawyer. North Country” is a film of two unequally weighted parts. The best of it, Josie’s entry into the iron mining business, the hard work and harsh treatment by the majority of her male coworkers is by far the more intriguing and well handled portion. When she quits and brings suit against the company the ensuing courtroom battle devolves into the routine, as she must face the ire of the community as Bill makes her case and desperately tries to get other femme miners to speak up for Josie and themselves. Director Niki Caro made quite a splash, internationally, with her contemporary story about a young Maori girl who fights to fulfill her destiny with “Whale Rider.” She departs, radically, from this little, personal film and takes to Hollywood to give a fictional account about a real-life class action suit that made history when the courts found in favor of the plaintiffs in their accusations of sexual harassment in a big mining company. Charleze Theron takes on the task of playing the lead character, Josie Aimes, in her first starring role since her Oscar win for her stunning performance in Monster.” The actress doesn’t hide her beauty as Josie but looks and acts the blue-collar role well enough. She is surrounded by a capable cast that, in part one of “North Country,” helps build up the tension as Josie and the other women in the company submit to the rampant male chauvinism. Oscar winner Frances McDormand gives an effective performance as Josie’s friend, coworker and union representative. Glory is one tough lady but succumbs to what appears to be a bad case of arthritis that turns out to be Lou Gehrig’s disease and the actress creates a fully formed and sympathetic character. Woody Harrelson is fine as lawyer Bill White and is one of the best things in part two’s courtroom battle. Sissy Spacek, as Josie’s mom, does a terrific job giving nuance and feeling to a role that others may have just walked through. Other character actors – Richard Jenkins as Josie’s disapproving father who does a complete turnaround; Sean Bean plays a good, honest man as Glory’s husband, Kyle; Jeremy Renner, as sexist pig and Josie’s former teen boyfriend, evokes appropriate disgust; Michelle Monaghan, as one of the other abused ladies, shows some acting chops; the rest of the cast fills things in credibly if only in two dimensions. The production aspects of part one effectively show the harsh north country of the title, using veteran cinematographer Chris Menges capable eye to capture the harsh working conditions of the mines. Good use of overhead shots showing the unforgiving landscape is a big plus in depicting the mining environs and the ugliness of the job. Unfortunately, when things turn to the courtroom, both production and intriguing story turn routine and unexciting. Niki Caro shows talent in mustering her sizable cast and telling Josie’s story. This whole tale of sexual harassment is well handled and unfolds with appropriate tension. The script, by Michael Seitman (adapted from the real-life book, Class Action: The Story of Lois Jensen and the Landmark Case That Changed Sexual Harassment Law, by Clara Bingham and Laura Leedy), is solid when in and around the iron mines but falls flat when it turns to the actual courtroom drama. The latter becomes a rah-rah women-empowered finale that we have seen all too many times before. If the whole of “North Country” had maintained the tensions and angst that were so well built up in part one, it could have been a pretty remarkable work. The sizzle so well done in part one fizzles out in part two of the film.