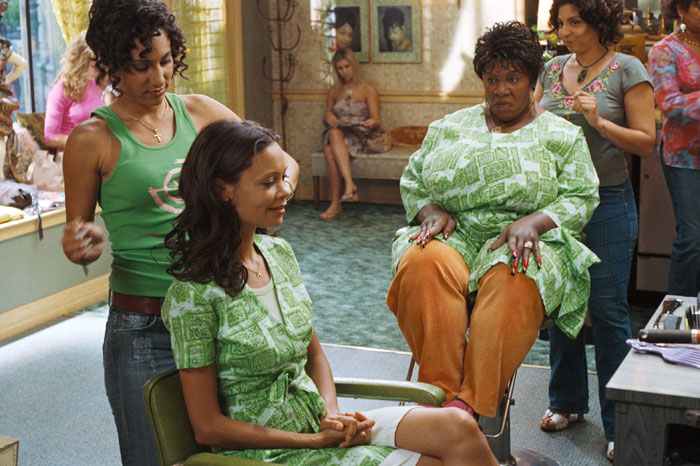 An young boy loses his soul mate when she's adopted from their home at the Golden Wonton restaurant and orphanage, then ends up married to the abusive and grossly overweight woman who saved him in the schoolyard and has dominated him ever since. But when Kate (Thandie Newton, "The Pursuit of Happyness") reenters his life, the put upon husband must overcome his jealous wife Rasputia (Eddie Murphy, "Dreamgirls"), her three massive brothers and Kate's duplicitous fiance and declare himself his own man, "Norbit."

After copping an Oscar nom for "Dreamgirls," Eddie Murphy's lapsed back into his old tricks and the schtick just ain't funny. "Norbit" is like "The Nutty Professor's" Klumps with the weight redistributed, the slapstick gone slack and the grossouts grown tiring. "Norbit" was written by Murphy and his brother, a comedy inspired by the subject of husband abuse, but its their audience they're abusing. The sight of a grossly overweight woman pouncing on top of her husband and breaking a bed isn't funny the first time, let alone the fifth, and people slamming through walls with enough force to leave their silhouette behind is a cartoon cliche. The putz yearning for a woman clearly beyond his reach can be done affectingly, but it's tough to care about Norbit's love life because the object of his affection, as played by the usually reliable Thandie Newton, is lovely but vapid. She's nothing but an eyelash fluttering walking clothes horse. As her fiance, Oscar winner Cuba Gooding Jr. continues his sad decline. There are two things that keep "Norbit" from being a complete waste of time. Murphy's characterization of Mr. Wong, the restaurateur and orphan savior, is generally amusing, even if the film's opening conceit is indebted to "The Jerk." But it is another Eddie altogether, Eddie Griffin, that gives the film its few laughs. As the Rib Shak owning wannabe pimp, Griffin takes that hoariest of cliches, the 'delay the wedding' tactic, and actually makes it funny. And as a jazzercise instructor by way of Little Richard, he turns a poop joke into a visual comic highlight. If "Dreamgirls" resuscitated Murphy's career, "Norbit's" sure to put it back from whence it came. Eddie Griffin on the other hand...