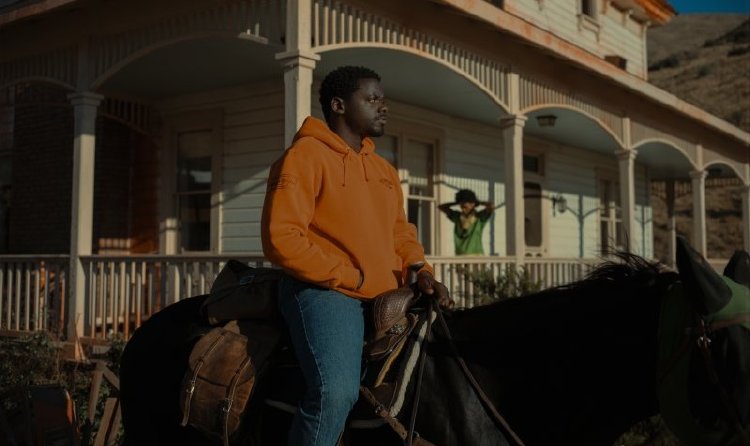 In the Santa Clarita valley, right next to the Jupiter’s Claim western theme park run by former child star Ricky “Jupe” Park (Steven Yeun), siblings OJ (as in ‘Otis Jr.,’ Daniel Kaluuya) and Emerald Haywood (Keke Palmer) struggle to keep the Hollywood horse ranch inherited from their industry legend dad afloat.  When they begin to observe what appears to be a giant UFO in the skies above their ranch, they become obsessed with obtaining concrete evidence of aliens as their ticket to financial freedom in “Nope.”

“Get Out” writer/director Jordan Peele creates one masterfully shot and edited horror flashback in his latest, but overall the filmmaker’s ambition has exceeded his grasp here.  In attempting to make a statement about former child stars scrambling to stay in show business and behind the scenes players dependent on unpredictable trained animals, Peele unspools strands he fails to pull back into a cohesive whole.  It must be said, however, that Daniel Kaluuya’s performance, a study in quiet, humble insecurity, almost saves the movie, his arc in meeting a challenge the most satisfying aspect of its climax.

Not only does OJ lose his dad Otis Haywood Sr. (Keith David) in the film’s opening moments, a victim of debris rained down by ‘a plane,’ he gets scant support from his more outgoing sister Em, who’s more intent on hustling side gigs than pitching in with the family business.  OJ is devoted to their horses, but doesn’t handle a professional gig well and has had to sell some to Jupe, but wishes to buy them back.  Em, meanwhile, is the driving force behind the flashier ‘document the aliens’ scheme, first enlisting Fry Electronics store employee Angel Torres (Brandon Perea) to install cameras, then calling upon famed cinematographer Antlers Holst (Michael Wincott, “The Crow”) to get the ‘impossible’ shot.

Jupiter’s Claim, farther down the valley, is tied into the film, but Jupe, still traumatized by the horrific event which ended his child stardom, is oddly melded into the action.  He’s responsible for setting off a major event, but it’s never clear if he’s performed this stunt before and if he has why it hasn’t been publicized.  His actions can be interpreted as a psychological reaction to that childhood trauma, but it is unfortunate that the most powerful scene in the film regards Jupe’s past and not the Haywoods’ current terror.  When the Jupiter Claim event is, indeed, reported in the news, we’re meant to believe the only press who arrive to follow up on the disappearance of over forty people is one guy from TMZ on a motorbike.

This event also reveals that what we think we know about that enormous saucer that hides behind a cloud that never moves is something else entirely.  Unfortunately, this is where the special effects begin to break down, something which originally felt organic now seemingly assembled from heating ducts and fabric.  Even perspectives don’t seem to match up.

Director of photography Hoyte van Hoytema filmed using IMAX cameras (in addition to 65 and 35mm) and there is a vast sweep to the action in the valley, which is made into something of a giant trap using dancing tube men, streamers and a horse named Lucky.  Editor Nicolas Mansour maintains spatial integrity as the elaborate scheme is put into play and Kaluuya is just great coming into his own as a horse wrangler, even eliciting an emotional moment with Palmer, whose character is, frankly, annoying.  (“Euphoria” fans excited by Barbie Ferreira’s casting beware that she is in one insignificant scene with one line.)  The soundtrack features Em’s literal needle drops onto Stevie Wonder vinyl while Corey Hart’s ‘Sunglasses at Night’ becomes nightmarish due to power fluctuations.

“Nope” gets its title from multiple utterings of the word as comical rejections of reality, but be prepared for its use as critical dismissal.  Peele’s film has some very worthy elements, but it just fails to coalesce.

As is my norm of late, I know only a little about movies I see to review. This allows me (I hope) to give an honest, without preconceived notions viewpoint of the film. I did my usual before seeing “Nope” and for the first time in a long time I wish I did bone up on the story the third-time feature director Jordan Peele tells here.

You might ask me why I needed more info going in the “Nope.” Well, because, when I walked out of the screening, my first thought was “I’m confused.” I do not know what the actual story, by Peele, is about. There are a lot of ideas laid out but few are fleshed out in any really tangible way.

The movie starts out on the Haywood Hollywood Horses ranch, a family business run by Otis Haywood (Keith David), son OJ (Daniel Kaluuya) and daughter Emerald (Keke Palmer). Dad declares there are “no more problems” for the business when objects (meteors?) start raining down and Otis is killed. The subject of aliens is raised and a grand plan by Emerald to “get the Oprah shot” is put into play. The idea is, scan the sky, find the aliens, get photographic proof and claim the lucrative reward for the definitive photo. At least, that is what appears to be the plotline. But wait, there is more.

There is a former child star (Ricky Park (Steven Yeun), infamously well-known for a TV show from 20 years ago that ended in animal carnage on the set. All grown up, he and his family own a western theme park that appears to have an unusual outdoor floor show. Ricky and the Haywood’s paths will cross in devastating ways.

These two stories, and a bunch of subplots, collide bombastically as humans must battle the ruthless and deadly alien creature and save mankind. Unfortunately, getting to that salvation is a mess of good ideas not fully explored. Instead, we get a good performance by Daniel Kaluuya and not so much from everyone else. Kiki Palmer’s Emerald is simply annoying and the character belongs in another movie.

When I see a debut film, like Peele’s “Get Out (2017),” I eagerly anticipate the follow up films. “Us (2019)" was creepily fun but not quite at the same level as the first. Now, third time around, I speculate if the filmmaker is a one shot wonder. His latest is full of ideas but his exploration of those ideas needs to be more focused. I am disappointed.