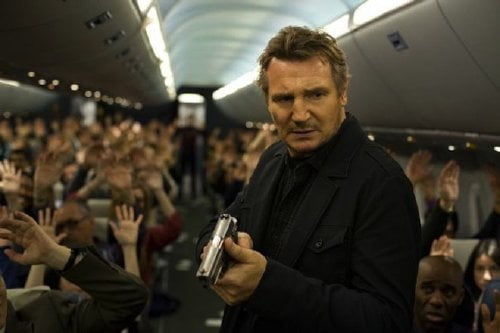 Alcoholic U.S. Air Marshall Bill Marks (Liam Neeson, "Taken") takes note of several passengers as he gets in his last cigarette and chug of booze before boarding. But when he tapes up the lavatory exhaust for another smoke, he's astonished to find an accusatory text on his private network, followed by threatening demands. With only a few people aboard the NYC to London flight he feels he can trust, Marks is faced with the death of a passenger every 20 minutes if $150 million isn't transferred into a specified account and the stress of his job becomes "Non-Stop."

Writers John W. Richardson, Christopher Roach (an episode of 'Diners, Drive-ins and Dives?') and Ryan Engle pull ideas from "Speed," "United 93" and "Ten Little Indians" for the type of script they seem to believe is clever with all its 'twists,' and yet when they finally unveil what's behind it, we've chosen the wrong door on 'Let's Make a Deal.' Their terrorist tells us how 'easy' it all was, but they never get around to filling in blanks as to just how it was done (and you may be sorry to find out why it was). Director Jaume Collet-Serra's ("Orphan," "Unknown") MO seems to be keep the action chaotic and no one will notice they've been had. There's the guy who asks for a light on the curb outside (Scoot McNairy, "Argo"), the guy who offers Visine in the airport bathroom (Anson Mount, AMC's 'Hell on Wheels'), the guy who's always in the way (Nate Parker, "Arbitrage"), the little girl who drops her Paddington Bear before boarding (Quinn McColgan, HBO's 'Mildred Pierce'), the Muslim (Omar Metwally, "Rendition"), the woman who insists on switching her seat (Julianne Moore), the aggressive guy who claims to be NYPD (Corey Stoll, "Midnight in Paris") and the uncooperative Black kid (Corey Hawkins, "Iron Man 3"). Then there's the crew, who, aware of Bill's problems, may just have it in for him. There's a trust thing going on here, and it's no big giveaway to let you know that the whole plot's been crafted to make Marks himself appear the guilty party. "Non-Stop" works for a while, even if Julianne Moore's been directed to make her every look shifty. Bill's inclined to trust Jen Summers, because he's been able to observe her in the seat next to his and because she tried to talk him down from his takeoff jitters. He also has a friend in flight attendant Nancy ('Downton Abbey's' Michelle Dockery), whom Jen notes delivers water when Bill's asked for gin. Perhaps the best bit the screenwriters have come up with involves just how that first victim's done in and who it turns out to be. After Bill's stopwatch runs down its next twenty minutes, we're almost in "Airplane '75" territory, the threat itself and Marks having been marked himself apparently not enough. The screenwriters also throw a number of cinematic cliches around, trying to sucker the audience with red herrings. Neeson's OK here as far as these things go, but his late stage action career is more fun when he's the aggressor - here he's always begging for understanding. If it seems odd that the awfully small craft (how many passengers are on this full 767 - maybe 120?) only has two flight attendants, it's distracting that they happen to be played by actresses well known for their period roles as Lady Mary and Patsy (Lupita Nyong'o, "12 Years a Slave"). Dockery's good enough to get us past this, but Nyong'o has nothing to do. The film also stars Linus Roach and Jason Butler Harner ("Next") as the pilot and copilot, while the ubiquitous Shea Whigham (HBO's 'Boardwalk Empire,' 'True Detective') is revealed as the voice of the TSA. After "Non-Stop's" sloppy climax, the filmmmakers can't be bothered to wrap with a little logic, the plane's disgorgement edited to suggest blatant disregard for safety procedures and introduce a relationship where that was none before.