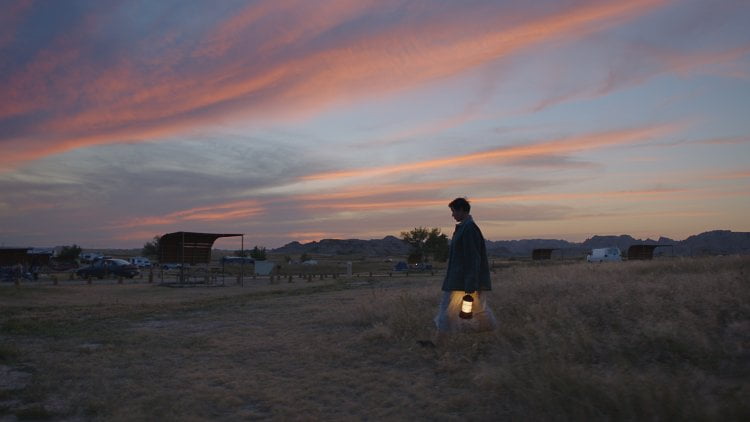 In 2011, U.S. Gypsum, the mine and drywall plant that kept Empire, Nevada’s economy humming, shut down.  One of its workers, Fern (Frances McDormand), adjusts by living in a camper, picking up work at various Amazon warehouses and other places she can find it.  When the weather turns too cold, Fern remembers Linda (Linda May) telling her about the Rubber Tramp Rendezvous (RTA), a community gathering and type of outdoor convention where she will solidify her place in “Nomadland.”

Writer/director Chloé Zhao fashioned her last film, "The Rider," casting the real non-actors from their own story.  When producer Frances McDormand brought her Jessica Bruder's book, the actress wasn’t sure that she should be a part of the project, but Zhao wisely cast her in the lead to bring interest to a project with less of an audience hook than a modern American Western.  As the fictional Fern, McDormand lived and worked among the nomads, her performance suggesting that we are seeing more of the real Fran than we ever have before.  But the Oscar winner is buoyed by some terrific support from many of the non-actors appearing here, most notably Swankie and Linda May.

This is a movie about people who prefer a life untethered, a choice that confounds many.  Watch Fern squirm when she’s greeted by a former coworker who refers to her as ‘homeless’ and offers help, corrected with ‘I’m not homeless, I’m houseless – they’re not the same thing.’  There is great beauty in the wide, open spaces Fern ranges around in ("God's Own Country" cinematographer Joshua James Richards favors so many magic hour shots it becomes borderline cliché, but one cannot dismiss the loveliness of that pink hued solitude), but there is also a melancholy quality to this lifestyle – Fern is always leaving someone (or, in one case, a friend’s abandoned dog) or watching someone leaving.

Friendships made on the road may be transitory, but paths have a habit of crossing, Fern enjoying an outdoor facial with Linda at the RTA she’d originally had no intention of attending.  And that meeting is like a celebratory convention of sorts, where sleek new RVs are exhibited along with lectures on ‘The 10 Commandents of Stealth Parking’ and ‘How to deal with your own sh%t’ (accompanied by the pros and cons of various bucket shapes and sizes).  There are also swap meets where one man’s trash may become another’s treasure and it is here that Fern meets Dave (David Strathairn), an interested gentleman who gets her onto a dance floor and convinces her to join him at his next paying gig working fast food at a tourist stop.

Unfortunately, where Dave’s character eventually lands is a head scratcher, even though Strathairn adds on-the-road courtliness to the proceedings.  Much more impactful is Swankie, the real life nomad whose medical prognosis evokes a reverie on life’s greatest pleasures, the film’s most moving, poetic scene (not all of the real life nomads cast here exhibit this much natural acting ability).  McDormand is at her most no-nonsense, down-to-earth self as Fern, capable if not always experienced, her demeanor softening as Fern’s recollections of her deceased husband become more frequent, shedding light on her character.

Zhao has an unusual method of filmmaking that fits her subject like a glove.  Ludovico Einaudi’s music begins with a pretty piano melody, picking up sad violins then gathering power adding windshield wipers and weather into the mix.  Despite a couple of off notes, “Nomadland” settles into your bones like a great piece of American literature.

In 2011, the US Gypsum Corporation closed its mining operation in Empire, Nevada and, as a result, closed down the town, even taking away its zip code. One worker at the plant, Fern (Frances McDormand), who also lost her husband recently, decides to go off the grid and live out of her van in “Nomadland.”

Writer-director-editor-producer Chloe Zhao uses the 2017 non-fiction book, Nomadland: Surviving America in the Twenty-First Century, as the basis of this personal survival tale. Following the Great Recession of 2009 (as opposed to the Greater Recession we now face perpetrated by the incompetence of the former president), many older Americans lost their homes and turned to the nomadic existence on America’s roads in search of work and eke out an existence.

Zhao personifies this wandering tribe of nomads with Fern, a taciturn, no nonsense woman who faces her shattered life with the resolve to persist and find a new path and direction. Highlighted by the stark, beautiful landscape (beautifully shot by Joshua James Richards), Fern is given a cloak of nobility in her stoic acceptance of what life has handed her.

Much of the cast is peopled by actual members of the nomadic family. Chloe Zhao also makes them noble too and, to show their unity, there are multiple scenes with them sitting around a campfire singing songs. This, to me, kind of sugarcoats what has to be a hard and often dangerous lifestyle chosen out of desperation, not altruism.

Frances McDormand is a first among equals in this mixture of the real life players and the actor cast. Oddly, David Strathairn appears as Dave, another nomadic wanderer rep’ing Fern’s love life, but his addition does not quite fit in. The non-acting cast is uneven but two, Swankie and Linda May, stand out.

It is not a life that I would want to have to live but you have to give the folks that do the credit they deserve as survivors. They should not have to be there though but their country failed them.

Searchlight is releasing Nomadland in theaters and on Hulu on 2/19/2021.