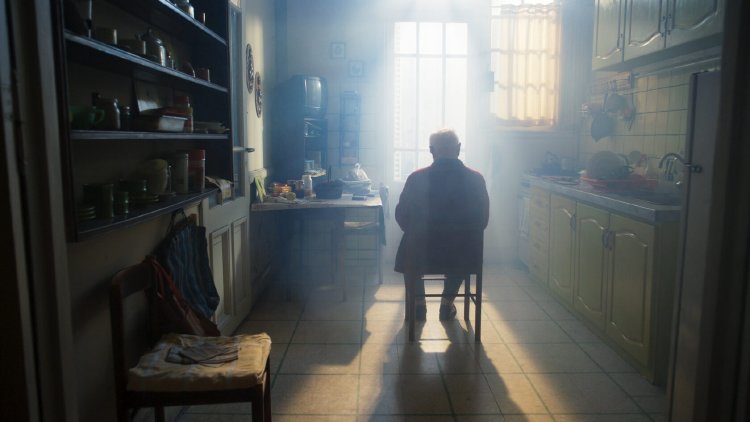 90 year-old Ulises (Pepe Soriano) gets lost in his own apartment building attempting to go out grocery shopping with his wife’s list.  Building super Daniel (Lautaro Delgado) offers to do it for him, but Ulises refuses and when he returns to his home we understand why.  Dalia (Marilú Marini) is adamant that no one enter their apartment, convinced that the homeowners’ association wants to boot them out, considering the seniors ‘dangerous.’  But Ulises is also tired of being cooped up and wonders why they never hear from their daughter or son, Carlos (Nicolás Scarpino).  As the evening progresses, the confused old man will face up to ghosts from his past in “Nocturna.”

Argentinean writer/director Gonzalo Calzada’s “Nocturna” is actually two separate films.  The main one, Side A, is titled “The Great Old Man’s Night,” while the more experimental Side B is “Where the Elephants Go to Die.”  Side A, which runs 104 minutes, can exist on its own whereas Side B, which runs 67, enriches the experience of having watched the first but would be fairly confusing, albeit in a nightmarish, visually compelling way, as a standalone.

Side A presents its narrative through Ulises’s point of view, his dementia forcing us into a dreamlike, unreliable narrative where we must hunt for clues to put his story together.  In what will turn out to be the old man’s last day on earth, we see him panic at the sight of a man trying to break into an apartment, Daniel having warned him of burglars in the building, and being bossed around by his wife, whose paranoia has cast her as his jailor.  Then there’s the upstairs neighbor, Elena (Desirée Salgueiro), who begins banging on their door in the middle of the night, demanding help.

Flashbacks present both Ulises and Dalia as children (Jenaro Nouet and Mora Della Veccia) and we learn the apartment building was once a grand home owned by Dalia’s father.  Calzada has uncannily made his film itself appear haunted, the whole cloaked in a greenish tinge of decay, Ulises’s paternal guilt weighing heavily upon him.  The sound of a ticking clock is a constant, time, occasionally noted with a digital display, often in a loop.  Ulises’s hearing aid feedback adds to the overwhelming sense of dread.  The production is a marvel, the old apartment reflecting bygone glories, the lead in its beautiful, oversized windows appearing like prison bars. Cinematographer Claudio Beiza makes the space feel alternatively expansive or claustrophobic.  The entire film is Lynchian, especially one unnerving sequence where Elena repeatedly takes off the same silk kimono, only to find another beneath it, a marvel of editing.

David Lynch’s influence is felt even more strongly in Side B, which has the look of his early shorts while boasting the jittering heads of “Lost Highway” and the dreams and dual characterizations of “Mulholland Drive.”  You won’t get outright answers to Side A, but you should get a deeper understanding.       I actually found Side A beginning to feel repetitive, but despite its non-narrative structure, the eroding celluloid snippets of Side B deepens one’s appreciation for what came before, giving us insights into Elena, Dalia and that ‘burglar’ while visualizing the effects of time and aging.

“Nocturna” may frustrate those who like their films with a straightforward, linear story, but Calzada’s ghosts and Soriano’s performance are genuinely haunting.

Breaking Glass Pictures releases both films on digital on January 18, with a DVD release of The Nocturna Collection arriving on February 1, 2022.