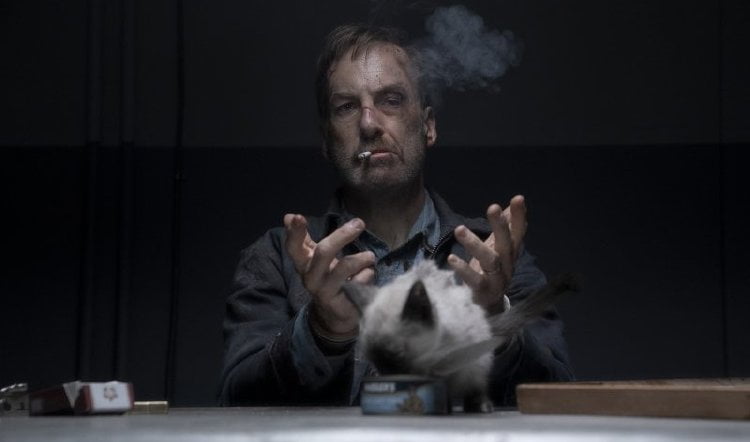 Hutch Mansell (Bob Odenkirk) disappoints his realtor wife Becca (Connie Nielsen) by missing the garbage truck yet again before heading to work at the tool and die shop owned by her father Eddie (Michael Ironside)      .  He’s in a rut until the Mansell family routine is shaken by a home intrusion, one in which Hutch gets the upper hand only to decide to let the two thieves run, earning the derision of his teenaged son Blake (Gage Munroe).  But Hutch noticed something that harkens back to his secret past, well before everyone regarded him as a “Nobody.”

The combination of Ilya Naishuller, the Russian director of the gimmicky R-rated action exercise “Hardcore Henry,” with Bob Odenkirk, a comedian now better known for his dramatic work, is an intriguing mash-up.  If, like me, you found the assault of “Hardcore Henry” quickly became boringly repetitive despite a number of ingenious set-ups, but admire Odenkirk’s work as Jimmy McGill, it won’t be a surprise to learn that it is Odenkirk who carries this film.

That decision made by Hutch is based on two things – while his son has tackled the masked male assailant to the ground, the masked female has a gun drawn on them and even though Hutch is behind her with a golf club, he realizes the safer thing to do is to let these desperate thieves run.  We also see that he’s noted a particular tattoo on the wrist of the woman, and, later, will learn he’d made yet another interesting observation which fed into his calculations.   After dealing with the macho aggressions of his obnoxious brother-in-law Charlie (Billy MacLellan, "Maudie") at work the next day, then being told by Eddie that his offer to buy the business is ‘good’ but not ‘great,’ he goes to visit his own dad (Christopher Lloyd) at a senior living center, telling him the intruders were scared and desperate, the woman’s 38 empty.  He then gets on a bus, going from one tattoo parlor to the next until he’s identified one of the assailants.

The scene that follows establishes Hutch as some kind of lethal special ops assassin and a bit of a softie, a man who just wants his watch back, but also the ‘kitty bracelet’ obviously important to his young daughter Abby (Paisley Cadorath).  It’s on the bus ride back home, though, that all hell breaks loose, five louts picking on a female bus driver and pretty passenger who are about to not know what hit them.  And unbeknownst to Hutch, one of the guys he sends to the hospital (Aleksandr Pal, "Hardcore Henry") happens to be the brother of Yulian Kuznetsov (Alexey Serebryakov, "Leviathan"), the guy responsible for protecting the Obshak, the clandestine financial system of the Russian mob.

Naishuller certainly knows how to stage an action sequence (the best features a speeding car and a fire extinguisher), but one must admire the obvious training Odenkirk underwent to believably take on larger adversaries while also taking quite a beating himself.  But between the director’s flashy style, heavy on slo-mo sequences, hyperactive editing and corny ‘60’s anthems like ‘I’ve Gotta Be Me,’ and a script by "John Wick" series writer Derek Kolstad that wavers between character definition and genre cliché, one would assume this had been adapted from a graphic novel or comic book.  Surprise – the idea came from Odenkirk himself after living through two break-ins while he and his family were at home and reacting the same way Hutch does here (the line a cop delivers in the movie, ‘You did the right thing.  Not what I would have done, but the right thing,’ came directly from the actor’s experience).  The actor gets us invested in his underappreciated good guy who perhaps made too strong an adjustment to his prior life in his search for happiness and he and Nielsen share a couple of strong moments bridging the gap that has grown in their marriage.  RZA makes a third act appearance (in a sequence reminiscent of ‘RED’) with an unexpected connection to Hutch (and also appears with Lloyd in a mid closing credits stinger).

Hutch (Bob Odenkirk) lives a routine life with every day the same as the last – wake, work, family, sleep. Then, two miscreants break into his home and, at gunpoint, threaten his wife, Becca (Connie Nielsen), and their kids. He gets the drop on the bad guys and – does nothing, much to the disappointment of his teen son Blake (Gage Munroe). But, in the aftermath of his shame, something clicks deep inside the guy and he proves that he is anything but a “Nobody.”

I did not know what to expect with “Nobody” – I think the pandemic has made me desire surprises in the movies I watch, so I rarely read more than a short synopsis about a film these days. That said, I am pleasantly surprised to see Bob Odenkirk make his debut as another man “with a certain set of skills.” His unexpected machismo shocked the hell out of me when he started kicking ass and taking names.

Our story begins with a long montage of Hutch’s minutes, hours, days and weeks doing the same old routine. Then, the B&E happens and, suddenly, Hutch’s stable old routine falls apart and a lean, mean fighting machine is unleashed. The new (well, old) Hutch comes to life and he wants justice. What follows is non-stop action, elaborate car chases, fist fights and shootouts with the Russian Mafia led by Yulin Kuzentsov (Aleksey Serebryakov).
As I watched the action, by tyro director Ilya Naishuller, unfold, I could not help but make comparison to kindred thrillers like “Die Hard (1988),” “The Equalizer (2014)” and any of the “John Wick” flicks. The bad guy body count is impressive but not overly gory, direction is straightforward and fast paced, as is the editing and action. “Nobody” may borrow liberally from those other films but with Bob Odenkirk, we get a new and unique action hero.

But, this is not about a one-man army taking on mind-boggling obstacles, like death. It is also a family movie as Hutch, after his earlier, disappointing behavior, goes all out to protect Becca, Blake and little Abby (Paisley Cadorath), who never loses faith in her dad. Then, as things get intense, he enlists those who will watch his back – his dad, David (Christopher Lloyd), and his half-brother, Harry (RZA), join in the mayhem against the mobsters in an odd bit of comic relief that works. To steal a quote from “Robocop (1987),” “I like it!”