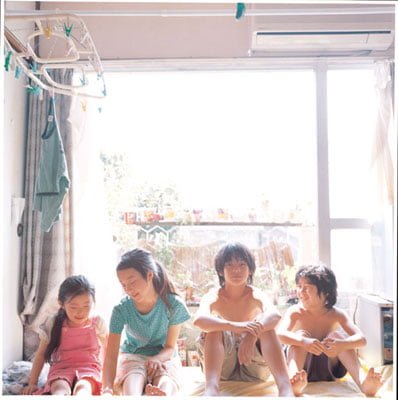 Keiko (You of the musical group Fairchild in her screen debut) is a single woman living in Tokyo with four children of different fathers. Having lost one apartment due to her younger son's tantrums, Keiko's learned to cover her tracks, presenting her newest landlord with twelve year old Akira (Yûya Yagira, Best Actor winner at 2004's Cannes) while smuggling in the rest of her children, whom she instructs to stay indoors at all times. When Keiko travels to another city, trailing yet another man she hopes will marry her, she leaves Akira with some money and the responsibility for his siblings. When the kids run into trouble, "Nobody Knows."

Inspired by a true case from 1988, writer/director Hirokazu Kore-eda ("After Life") conjectures that four children could not have survived for six months on their own had their experience been abusive. His masterfully told tale of childhood and its loss is profoundly moving and bittersweet. The Fukushimas appear to be a happy bunch. Mom is engaged with her kids, home schooling them and playing games, but she also seems to be too much one of them rather than the authority figure (You's kewpie doll of a voice compounds this impression). When mom first tells Akira she's 'going away for a little while,' it is clear that he has learned responsible habits. He deposits the money she has left him and begins calculating sums for rent and utilities. He also knows how to provide a father-figure's warmth. When Yuki (Momoko Shimizu), the youngest at five, demands Apollo Chocos, Akira searches the marketplace until he can bring his sister the treat. Keiko's limitations as a mother really begin to pile up upon her return. She deflects second eldest Kyoko's (Ayu Kitaura) desire to go to school with empty arguments and awakens her family in the wee hours when she comes home drunk bearing a gift of sushi. When Akira tells her he had to visit one of her exes to get additional money, Keiko clucks at the small amount, wondering why the man didn't recognize 'children in trouble.' Clearly there is an immaturity issue here, a desire for a man, even her own son, to take charge of a tenuous situation. Keiko's absences become more pronounced and the children's fate grows worse. Utilities are cut and Akira is reduced to begging for expired food from the market he used to patronize. Yuki's birthday was celebrated with a trip out of doors, but now the whole family must go to the park in order to wash. They meet a bullied schoolgirl, Saki (Hanae Kan), there, but when she tries to raise some money for them by going off with a businessman ('I only sang karaoke with him!'), Akira rejects her, perhaps sensing his mother's destructive spirit. It takes a tragedy to bring her back into the fold and the film's final shot is of this re-formed family. Hirokazu paces his film very deliberately, small moments all building up to larger meaning. The early goings are light, childish adventure. Akira seems to almost enjoy his head of household status, even inviting friends over to play videos (these boys later reject him when conditions deteriorate). The two youngest, Shigeru (Hiei Kimura) and Yuki, don't even seem to realize anything is amiss. The sunny bliss takes a downturn along with the weather as Christmas approaches and Keiko does not return as promised. One of Hirokazu's most poignant scenes is a Christmas Eve cross-cutting of Akira waiting in the snow while across the street, the market cashier (Takoko Take) reduces Christmas merchandise on the sidewalk. It's a 'little match girl' moment. The earlier joys of childhood - a found ball, a box of crayons used to the nib, an ant - turn into a numbed boredom in the stagnant apartment. Seventy percent of the 141 minute film take place inside of that tiny, cramped apartment and it is a testament to Hirokazu's skill that the environment never becomes boring or claustrophobic. Using mostly static shots (cinematography by Yutaka Yamasaki, "After Life"), this home and its inhabitants are defined by close-ups - nail polish spilled on a wooden floor, a hand against a quilt, the room reflected in a tea kettle, dirty feet amidst plants on the balcony, a glass kitchen cabinet in center frame crowding Akira to the left - all of which seem to be showing us something new to be examined. The border created by sliding doors has the weight of an unscalable wall, the balcony beyond's two foot width like another land. Seemingly insignificant details, such as the slow cashier being taught how to bag, are really introducing new elements into the story. She becomes the only adult privy to Akira's predicament, but respects his decision to avoid child services in order to keep his family together. (Saki cannot report the situation without revealing her truancy.) The director achieves wonderfully natural performances from his mostly inexperienced cast. The exchange of a single look between Akira and Kyoko crackles with tension and unspoken rebuke while the two younger children embody blissful innocence and trust. Akira's late, greatest moment of joy, when he is invited to fill in the vacant spot for a school baseball game, is a heartbreaking montage exemplifying everything that has been taken away from him. The film is simply scored with a beautifully melodic single guitar track. The film's only, tiny misstep is the use of a ballad over the film's penultimate scene. "Nobody Knows" is an eye-opening example of anonymous neglect and Hirokazu makes it all the more moving for its myriad moments of love, warmth and wonder.

Take the infamous affair between JFK and Marilyn Monroe, clone it and drop it into a remote rural region in France, add a novelist suffering from writer’s block and the questioned death of a local beauty and you get “Nobody Else But You.” Director Gerald Hustache-Mathieu creates a truly unique work that pays homage to writers and directors of thrillers and, especially, to Marilyn and tells a story that parallels the life and death of MM. All the speculations about Kennedy and Monroe, their affair and her tragic death are laid out in Candice’s own story that also ends in tragedy. This frigid who-dun-it is also a definite nod to the Coen brothers and “Fargo” with its barren, icy cold and bleak landscapes but it is not imitation by any means. Writer-director Hustache-Mathieu puts his own imprint on this entertaining crime thriller and shows a deft hand working his camera, cast and crew while telling an intriguing modern fable. He plainly states, with his parallel tale, just what he thinks of Marilyn (he loves her, obviously), JFK and RFK (does not love them) and even a J. Edgar Hoover. His surrogates for these historical American icons and locale in rural Mouthe, France (the coldest town in the country), bring the lofty legend down to human levels. Jean-Paul Rouve, as detective-writer David, is the anchor of the film as he gets the inkling of an idea after driving past the crime scene where Candice’s body was found, so desolate a place it is called No Man’s Land. He returns to the town and begins digging into the apparent suicide. He figures there is a story for a novel here but is not prepared for one that involves murder, corruption and cover-up. It is Sophie Quinton as Candice Lecoeur (nee Martine Langevin), though, who is the focus of “Nobody Else But You.” Her story is told in flash backs to different stages of her life, allowing her story – hopeful beginnings, rise to fame, tragic death – to be carefully pieced together so our thoughts and impressions of Candice slowly change as her life unfolds. Quinton is sexy, sad, happy and melancholy as she builds her sympathetic Candice to a fully dimensioned tragic figure. The thriller story of corruption and cover-up is tightly woven and the veteran cast that makes up the conspirators in the plot is well-developed. They are not just some sinister characters lurking in the shadows but have complex motivations in their uncovered, by David, cover-up. That Hustache-Mathieu is able to also make a heart-felt homage to Marilyn and those filmmakers who influenced his own career makes me look forward to the future works of this talented auteur.