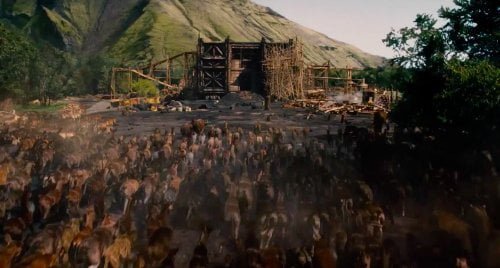 When God tires of man's wickedness, he decides to flood the earth to wipe his slate clean. And so he commands one man to build an Ark that will ensure continuity of all the species He has created. When those descended from Cain discover the Creator's plan, the fate of mankind falls upon "Noah."

At the age of 13, writer/director Darren Aronofsky ("Black Swan") wrote a poem about Noah for school that won a United Nations contest and he's been hooked ever since. Be prepared - this isn't the fairy tale most are familiar with but the tale of a tortured individual set within an auteur's balmy vision. Fallen angels turned into giant stone creatures? And yet it (mostly) works. After a prologue establishing how the tribes of man split after Adam and Eve were ejected from the Garden of Eden, we meet Noah (Russell Crowe) with his sons Shem (Douglas Booth, 2013's "Romeo and Juliet") and Ham (Logan Lerman, "The Perks of Being a Wallflower"), disturbed by the sight of an injured animal (a CGI dog-like creature with scales placed like feathers, evolution at work). Noah removes a sharpened stick from its side (like Androcles pulling the thorn from the lion's paw) but cannot save it. He tells his wife Naameh (Jennifer Connelly, "Requiem for a Dream") that their sons have been exposed to hunters. With the tribes of Cain approaching, Noah sets off to visit his grandfather, Methuselah (Anthony Hopkins), to tell him of his horrifying visions and receive guidance. Along the way they find a young survivor of a slaughter and Ila ("Harry Potter's" Emma Watson), whose side has been slashed to make her barren, is brought into their family. Noah cherishes the Creator's gifts, admonishing his son for picking a flower, as they should only gather what they need. He's startled when a drop of rain produces a new plant from nothing, then dreams of being suspended in a world of water, the dead carpeting its depths. With the help of his grandfather's hallucinogenic tea, he finds his course - to build an ark to house the innocent, the animals, from an impending flood. With the help of the Watchers, the fallen angels turned giant stone creatures, and the forest sprung from a seed from Eden, the ark is built as the wicked led by Tubal-cain (Ray Winstone, "Sexy Beast") encamp on an overlooking hill. This visionary work presents a Noah who cherishes nature above all us pitted against a descendant of Cain who believes it is man's dominion. After a vision of man's wickedness (men assaulting young girls, a sheep torn apart by the masses) in which he sees himself, Noah comes to the conclusion that all of mankind is meant to perish. This creates a conflict within his own family - Naameh asks for Methuselah's help with Ila's infertility and Ham is intent on finding a bride of his own, a desire that opens him to Tubal-cain's influence. Aronofsky and his cowriter have ingeniously filled in the Biblical blanks (in addition to Androcles one can see Abraham's conundrum in Noah's surmising) to create a provocative yet action packed epic. The ark itself is built to Biblical specifications, a rectangular box engineered only to float, its animal passengers arriving in three waves, sedated within the ark with burning herbs. The eventual driving rains bring not only a flood, but a sea of desperation in those left behind. The director has also cannily represented evolution in a rapidly cut montage that sees creatures crawl from water to land, yet ignores the ape. Crowe has been perfectly cast here, giving a performance that reminds us of his power after a string of disappointments (even if, yet again, he sings). Connelly is strong support, morally complex, yet it is surprising that it is Watson as the adoptive daughter/in-law who has the strongest scenes with Crowe as Noah attempts to divine the Creator's intentions. Hopkins supresses his inner ham yet his Methuselah is impish, his obsession with tasting a berry the old man's own form of worship. Other choices are odd though, the Icelandic locations and woven, toggled wear created by "American Hustle's" Michael Wilkinson more in keeping with Ancient Briton than Mesopotamia. Still, stylistically they are in keeping with a vision of world's end. "Noah" also loses some of its momentum as the drama is given over to the ark passengers conflicts. Cinematography by Matthew Libatique ("Black Swan") is harshly realistic, all greys and greens and browns when he's not setting silhouettes against impossibly colorful skies out of Aboriginal dreams. Special effects are inventive, the Watchers (voiced by Frank Langella, Mark Margolis and Nick Nolte) a marvel of design. Aronofsky hasn't given us the "Noah" taught in Sunday schools, he's given us something a lot more though provoking that truly brings the tale to life.