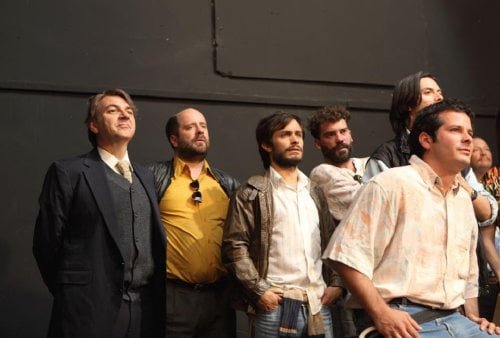 By 1988, General Augusto Pinochet had ruled Chile as dictator for 17 years. The country’s constitution drafted in 1980 called for a national plebiscite to decide the political fate of Chile. A “Yes” vote would keep Pinochet in power as president for another eight years. But, for those in the country who wanted popular elections and change, the vote would be a resounding “No.”

On September 11, 1973, Chilean President Salvador Allende was murdered in a military coup engineered by Augusto Pinochet with U.S. backing. For the next fifteen years, Pinochet ruled in a dictatorship of fear, 'disappearing' thousands of his own people. Then, succumbing to global pressure, he announced that the country's presidency would be determined by a public vote, one which he had every intention of ensuring would be the YES needed to maintain power for eight more years. Pinochet was surprised when an ad man, Rene Saavedra (Gael Garcia Bernal), working for a member of his own advisory board, begins to get popular support with his campaign for 'No.' This is the end of a trilogy about Chile's Pinochet years by director Pablo Larraín ("Tony Manero"), adapted from Antonio Skármeta's play by "The Maid" screenwriter Pedro Peirano. It hangs on three ideas - a marketing guy (Bernal's character is a composite of two people) finding his moral compass while he treats a political campaign like any other product, how politics are now shaped like ads for soft drinks and the artistic choice to shoot the whole using a 1983 U-matic video camera to match historic footage. While each of these ideas is intriguing, the execution of all is less than satisfying. Garcia Bernal does a nice job here as the ad guy whose clients can't believe their ears when he nixes their ideas, highlighting Pinochet's oppression, as negative and proposes rainbows and jingles. But his character arc has been left a bit ambiguous - he wants his ex-wife, a liberal persecuted for her radical activism, back but we are left to wonder how he can witness police violence against her yet not wake up to the tyranny he lives under until he experiences it himself, directly, through violence. Anyone who doesn't realize how politics are sold today is naive, but to see it done back in the 80's in a situation more literally life or death than the American political arena is intriguing, especially given the fear of the common man,expecting reprisals for voting, to overcome. Until it begins to get repetitive. What is most surprising is that Pinochet's folks issued 'YES' ads (each side got 15 minutes of air time at a late hour) that seem inspired by Communist propaganda, featuring wheat fields, tanks and happy workers, ironic to say the least. Larraín makes no comment about this. As for the U-matic video, it does work to make the marrying of new and old footage seamless, but it's also ugly, looking like film left in close quarters with a heavy smoker for decades. I was surprised when "No" was chosen as one of the five Foreign Language Oscar nominees. The film's politics are admirable and Larraín has highlighted a unique David and Goliath moment in world history. It just never engages all that much as entertainment OR art.

Based on the play by Chilean author Antonio Skarmeta, director Pablo Larrain brings us a national event that, at the time, was essentially ignored by the rest of the world. However, within Chile, the plebiscite and its potential changes to the political and social fabric of their country were mind-boggling. Seen through the eyes of ambitious young publicist, Rene Saavedra (Gael Garcia Bernal), we are shown the battle between the Yes and No camps as the pro-Pinochet faction use their power to thwart the regime's nay-sayers. “No” gives a fresh look at the little known history of a country whose duly elected government under Salvador Allende was overthrown in a military coup led by Pinochet in 1973. The 17 years of fascist dictatorship resulted in thousands murdered and tens of thousands of cases of arrest, torture and disappearance. The film shows the time when Chile was on the cusp, teetering between continued fascist rule and the possibilities and promise of democracy. The filmmakers make no show of hiding their liberal left and pro “no” feelings. “No” is a heartfelt effort by those involved. The images of the story are shot in low-def video to look the age of its subject matter. But, this results in fuzzy images that no longer has a place in the age of ultra high-definition. (If you are going to watch, say, “Die Hard,” would you watch it on original, fuzzy VHS or on clear and crisp Blu-ray?)