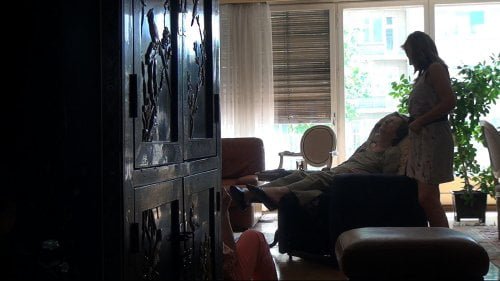 Over the years, filmmaker Chantal Akerman ("23 Quai du Commerce, 1080 Bruxelles") said she shot just about everything. In the spring of 2014 when her mother died at 86, Akerman gathered together 20 hours of footage and her subject found her in "No Home Movie."

Those with no patience for long takes with little but the everyday going on will most likely find Akerman's last film a slog. But those willing to submit to the filmmaker's vision may be surprised that a film consisting of minutes-long takes of barren, arid landscapes, her mother's Brussels apartment and the occasional conversation can have such a powerful emotional build. Knowledge of Akerman's suicide in October of 2015 gives the film an additional, heartbreaking dimension. We spend the first several minutes on a static shot of a scrubby pine tree being whipped by the wind against an unforgiving landscape. This sets an emotional tone, one of being alone and battered out in the world. After settling in a park and a beautiful yard with an empty lounge chair, our next stop is a mint green tiled kitchen (which immediately brings to mind Akerman's 1975 masterpiece). We're in the apartment of Chantal's mother, Natalia. Over the course of the film's nearly two hour running time, we'll witness Akerman and her mother discussing everything from how much they are enjoying their meal to family history and their changing relationship with Jewish traditions. We get the first hint of Natalia's past as a holocaust survivor as Chantal remembers the man who was in love with her grandmother, a man Natalia insists was a friend, yes, but mainly around to assist with the papers that would get them into Belgium. Akerman comes and goes from her mother's apartment as noted by long takes of roadside going by, rippling water over her shadow and a couple of Skype sessions she has with mom. Chantal is in a very good mood in New York, her American Spirits aside her laptop, about ten half-hearted attempts to end the conversation segueing into loving goodbyes, kisses and more conversation. But we also begin to see Natalia's health fade. Akerman records her apartment at night, then begins to explore every nook and cranny, committing everything to digital memory. Mother tells Chantal's sister Sylvanie that Chantal doesn't talk to her, evoking disbelief, but the clarification that she doesn't tell her anything important is born out. Akerman seems to hide herself, present, but barely seen in profile, usually from behind, often only in shadow. We get a sense of heaviness hanging over her, from her step, her movements, her breathing and voice, gravelled by smoking. A conversation with Natalia's caretaker Carla is where we finally learn that Natalia was captured in Belgium after escaping Poland and sent back - to Auschwitz. Carla nods and smiles, not fully understanding the import. It is Carla who hears Chantal describe her tiny, remaining family, just her, her sister and mother, as 'somewhat sad.' We last see Natalia as her daughters plead with her not go sleep, but to tell them a story. The old woman keeps drifting off, her daughters keep rousing her (we get no explanation again, but per press notes, keeping Natalia awake was per doctor's orders). That barren landscape again, this time with telephone lines stretching across it, a link to the rest of the world. But back in Brussels, the apartment is quiet. The woman forced from her homeland is no longer home. Grade:

A static camera shows a harsh wind-blown landscape. A shirtless fat man sits, back to the camera, on a park bench, A lounge chair sits in an empty yard; Finally, an elderly lady walks into the room, beginning the actual story of “No Home Movie.” Chantal Akerman ends her decades long filmmaking career with a personal document about her mother, Natalia, a survivor of Auschwitz and the Holocaust. It is these interludes of “No Home Movie” that are the heart of the film. Akerman locks down her camera for much of the filming to show the day to day life of her mom. Not much happens during most of these interludes, but you learn a great deal about Natalie’s early life under Nazi domination. The relationship between Chantal, her sister Sylvania, and Natalie, is well explored with the filmmaker traveling back and forth between Brussels, where her mom lives, and the US, where Akerman dug her roots. The filmmaker also explores the long distance relationship with her mom via Skype, making the point that, with our technology, there is virtually no distance between our families. If the total of “No Home Movie” focused on the mom/daughter dynamics and condensed down to this quiet but interesting family story – which would only have been about 30 minutes long, I would be far more praiseworthy. But, Akerman’s cinema verite style, using extraordinary long shots that I mentioned at the beginning of this review, makes the mind wander. Not a good thing for the viewer watching seven minute long shots out a car window of featureless landscape in Israel. There is a fascinating live documentary short about the relationship between a mother and her adult child in here, but the director’s self indulgent style – I was bored through much of the film - is too much for me.