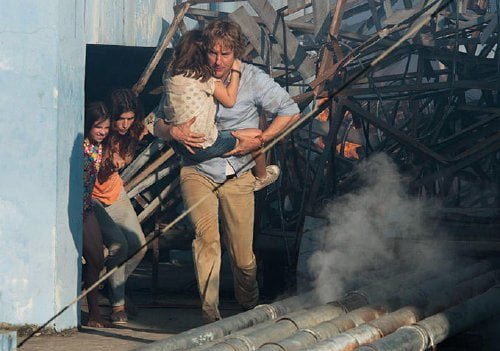 Jack Dwyer (Owen Wilson), his wife Annie (Lake Bell) and their two young daughters, Lucy (Sterling Jerins) and Beeze (Claire Geare) pulled up their roots in Austin Texas to move, for Jack’s job, to unnamed (to us) Southeast Asian capital. Their first night is punctuated by distant explosions and the next days will be ones of survival for the Dwyer family in “No Escape.”

After his own business failed, Jack Dwyer (Owen Wilson) has taken an engineering job with Cardiff in Southeast Asia, thinking he'll be helping provide clean water to a third world country. But no sooner has he gotten his wife Annie (Lake Bell, "In a World...") and two young daughters Lucy (Sterling Jerins, "World War Z") and Beeze (Claire Geare, "Dream House") settled into the Imperial Lotus Hotel than things begin to get weird. Electricity is spotty, television and the Internet are out and he cannot contact his new employer. When he ventures out for a newspaper the next morning, he's caught between a rebel army and military riot police. By the time he makes it back, he's seen people shot in the streets and an American executed in front of his hotel. Jack is in a panic, thinking there may be "No Escape." Cowriter (with producer brother Drew)/director John Erick Dowdle ("Devil," "As Above, So Below") have made a pulse pounding action thriller resting atop a political scenario so black and white they've reduced an entire (unnamed, yet implied) country to a faceless, brutal mob. It's like eating a MacDonald's dollar meal on fine china and finding a hair in it. While the central family dynamic created by Wilson, Bell and their two young costars is quite relatable, both assistance and threat show up so calculatedly, one wonders how one mercenary and one rebel can cover so much coincidental ground. And while Jack is intentionally an Everyman vs. action hero, his level of naivety about the country and company he's about to embrace stretches credulity. The film begins with a violent prologue the film would have been better off without, tipping the audience off to the upcoming unrest before winding the clock back 17 hours. Jack and Annie face eleven more hours on a transpacific flight with two small girls to keep entertained. Lucy is quite forthright asking a stranger in the row behind them how he received a couple of scars. Her parents are embarrassed, but Hammond (Pierce Brosnan) not only takes it in stride, he comes to the family's aide on the ground, diverting them from illegal taxis to his own ride with the colorful native known as Kenny Rogers (Sahajak Boonthanakit, "Only God Forgives"). Annie gets skittish around Hammond's leering comments about the local women, but the man does get them safely to their destination. He also shows up in a staircase just in time to fend off armed rebels trying to prevent Jack from returning to his family from his ill-advised errand, disappearing with advice to get to the roof. Annie's startled by Jack's panic, especially when she realizes Lucy's left the room to head by herself to the hotel pool. In one of the film's most hair-raising scenes, Jack watches his daughter swim to the bottom as two men hacking tourists with machetes watch him from an overlooking room. The roof doesn't prove any safer, a helicopter seen as savior beginning to spray automatic weapon fire to those seeking asylum. Jack must convince his wife to jump across a steep drop before throwing his terrified children across (and he spends a lot of time convincing them, given the slaughter taking place just yards away). No sooner have they made it to their next 'ten steps ahead,' than Annie's shocked to see her husband kill a man to save his family. The Dowdles try to make a couple concessions to the nameless Asians, as one stops to help the disguised Jack, notes his blue eyes and Nikes, but moves on, while another hides them in a garden. Hammond, who appears once again in the nick of time along with Kenny, provides the back story for their anger - Cardiff is but one more company that has come in after offering heavy loans the country will never be able to repay - it's colonial exploitation, not good Samaratinism that Jack's unknowingly aligned himself with. 'They're trying to protect their families just like you,' is a pretty sorry explanation however, given the generic bloodthirsty onslaught. If the casting of Wilson here sounds laughable, he's not going the Liam Neeson route and is convincing as a jocular family man suddenly fighting for their survival. The filmmakers never make anything he does seem impossible, just determined with a huge shot of adrenaline. Bell is also good as the supportive wife who lets us know she's even if she's never been comfortable with her husband's choice, she's not blaming him for their situation. She also gets her shots at showing untapped wells of grit. Jerins and Geare create distinct sisters. Brosnan's swaggeringly humorous, Boonthanakit a good sidekick. None of the actors portraying their enemy are given names, but that one guy wearing a checked red and white head scarf is everywhere all of the time. "No Escape" is a visceral, stomach knotting actioner and for that it deserves some credit, but it's disappointing when one considers how much better it could have been had the Dowdles had any sense of nuance. Grade:

Director John Erick Dowdle co-wrote, with brother Drew, the high tension script that begins with the Prime Minister of the unnamed country being assassinated and a coup begins. Flash to the cabin of a Pacific Airways airliner and we meet the Dwyer family as they head to their new life in a new, foreign city. Jack had to sell his Austin-based company and take a middle-level management job with a multi-national corporation installing a water treatment facility in country. At the airport, on their arrival, they meet a British ex-pat, Hammond (Pierce Brosnan), who helps them get to their hotel with his friend, tour bus owner Kenny Rogers (Sahajak Boonthanakit). In one of the film many obvious plot points, there is more to Hammond than meets the eye. You know he will be back to help the Dwyer family but, as the story plays out, that is what you want and expect. This is a true “ordinary people facing extraordinary circumstances” kind of film that has the purpose to hit the viewer’s buttons as the tension ramps up and the tiny family must face one dangerous challenge after the next, including execution at the hands of the rebels. All the while, Jack and Annie protect their girls, risking their lives to get to safety. Dowdle steadily increases the dangers facing the intrepid little family for the bulk of the film – though you must suspend disbelief many times, not that I’m complaining – to the expected conclusion. The story may be cookie-cutter in its construct but the execution of that story, along with the copious violent action (not for the squeamish) and solid cast, make this a decent action adventure thriller.