No End in Sight 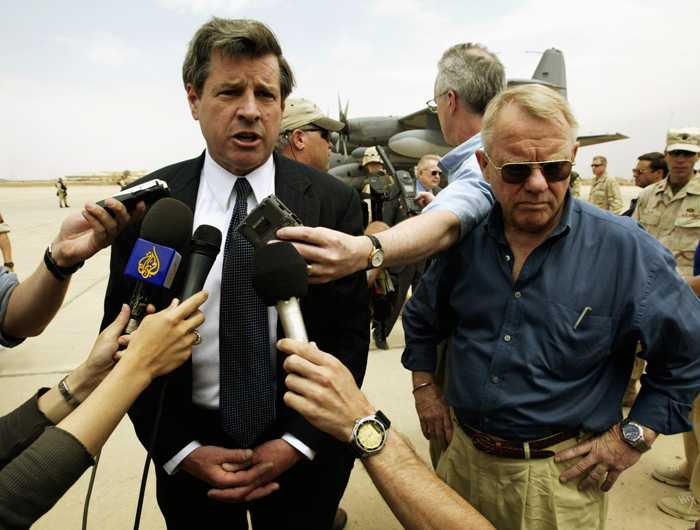 Looking back with irony, writer/director Charles Ferguson, who holds a political science Ph.D. degree from the Massachusetts Institute of Technology, begins his debut film with archival footage of Donald Rumsfeld thanking President Bush for his leadership, noting that his role in Iraq will go down in history. Then he methodically illustrates how a series of incompetent, bullheaded decisions have taken us down a path where there is virtually "No End in Sight."

This extraordinary documentary takes a very complex subject and clearly pinpoints three decisions that caused the Iraqi people to turn against the U.S. and bring their country to the brink of civil war. Ferguson packs his piece with information relayed by people from the inside (an effective montage of sad, serious faces initially introduces his subjects) and without ever even hinting at Michael Moorish polemic or diatribes, then builds an irrefutable case for the Bush Administration's monumental failures. Previously reported history concisely brings us up to date from the history of Iraq dating back to Bush Sr.'s war up through George W.'s grossly naive 2003 proclamation that major conflict in Iraq had ended. An escalation of facts - poor and grossly under-equipped preparation for not only the war, but Iraq's rebuilding; hundreds of thousands of civilian casualties and thousands of troop deaths; decisions made by people with no military experience, no Arabic and no background in Iraq; unchecked looting that resulted in the loss of 12 billion - Iraq's gross national revenue for a year - set the stage for some succinct condemnations. The first of those is, indeed, that looting, which resulted in not only severe financial loss but the loss of heritage and national identity and the armament of the insurgency! We see museums and libraries in devastation and hear tales of industrial plants being raided with cranes. The Office for Reconstruction and Humanitarian Assistance (ORHA), represented here by former head General Jay Garner and former Ambassador Barbara Bodine, notes that of all the institutions listed by them for protection, including the aforementioned, only the Ministry of Oil actually was. Garner, an intelligent choice for the position, is rather summarily replaced by Paul Bremer (seen above with Garner at press conference), another man with no Arabic, Iraqi or reconstruction experience, who goes on to make the next two decisions that turn a bad situation worse. The first is the de-Ba’athification, where all of Hussein's former government employees, no matter their complicity, are denied work rebuilding the country. Bingo - massive unemployment, dissatisfaction and a new team with no knowledge of the country's infrastructure. The last nail in the coffin is the disbanding of the Iraqi military, which exacerbated the unemployment problem and created the insurgency we still fight today. And don't forget, we allowed them to arm themselves because we did not have enough troops to guard ammo dumps. "No End in Sight" is a horrifically compelling indictment of the George Bush White House, an administration that has reversed global opinion of the United States through ignorance and arrogance and cost this country almost two *trillion* dollars and immeasurable human loss. This is the Iraq War documentary that covers all bases and is a must see for every citizen of the United States. Just listen to the silence of those who refuted "Fahrenheit 911."